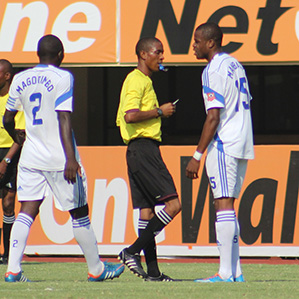 AFTER the crowning of the 2014 Premier Soccer League (PSL) champions Dynamos, the Soccer Star of-the-Year unveiling and crowning ceremony puts the icing on the cake to end the eventful season.
Tonight, the Castle Lager PSL’s Best Player will be unveiled at a colourful ceremony in Harare.
The league awards the 11 best players with the Soccer Star crowned at the same night.
The Coach of the Year, Goalkeeper of the Year, Rookie of the Year, Referee of the Year and Most Disciplined Team will be unveiled.
It will be an early Christmas present for the lucky players and officials.
For being a Soccer Star finalist, a player earns US$1 000.
Kuda Musharu from How Mine and Highlanders’ Charles Sibanda will share US$3 000 for the Golden Boot award.
They both scored 12 goals during the season.
Rich pickings might be for ZPC Kariba’s Tendai Hove who is favourite to win the Goalkeeper of the Year accolade which has a winner’s purse of US$2 000. According to statistics FC Platinum’s Petros Mhari should have been the favourite as he conceded less goals than Hove.
Hove is also guaranteed US$1 000 for being a Soccer Star finalist.
The ZPC Kariba shot stopper is a favourite to win the Soccer Star of-the-Year award as well.
If he fails to snatch the top award, his name will most likely be among the top three.
Last year, Herbert Rusawo won the Goalkeeper of the Year award for conceding the least number of goals.
Hove’s teammate Dennis Dauda is another Soccer Star hopeful who may walk away US$6 000 richer tonight as he has enjoyed the season at ZPC Kariba.
To win the grand prize of US$5 000, the centre-back has to shrug off competition from Hove and Dynamos’ Stephen Alimenda.
Dauda has played the whole season without a caution, something that makes him a clinical defender.
For the good game he has played, he derseves to be in the top three.
Veteran defensive linkman, Alimenda has seen it all in local football. His exploits during this season have been exceptional.
The former Mwana Africa midfielder might have time for merry making this festive season.
He might be the second runner-up to the Soccer Star with a prize money of US$2 000.
On the most promising player, a number of rookies made the grade this season. These include Dynamos’ Blessing Moyo, How Mine’s Bernard Donovan, Wisdom Mtasa and Walter Musona both of FC Platinum and Bantu Rovers’ teenage Hadebe.
The accolade has a prize money of US$2 000.
Last season Ronald Pfumbidzai of CAPS United won the prize.
The PSL continues to promote young lads as the prize motivates the players. The Premiership has five slots for every team to register an Under-20 player.
ZPC Kariba gaffer Saul Chamikunka lost the championship to Dynamos, but the former Buffaloes coach is set to win the Coach-of-the Year award tonight. The selection was done a day before the league ended and Chaminuka had won the favour from several panellists.
He was on the brink of making history by guiding the league debutants to a title only to be denied by a fired up CAPS United on the last day.
Chaminuka‘ndimambo’ as some fans put it, is most likely to be the coaches’ king this season.
Last year, it was Harare City’s Bigboy Mawiwi.
The accolade is seemingly being taken by coaches who miss the league title.
Mawiwi won it, but did not win the league and that is the same with Chaminuka who is tipped to win the prize.
Referees’ efforts will not go unnoticed tonight.
The men in the middle have an accolade for making the game a success.
Last year, Nomore Masundire won the big prize and received US$2 000.