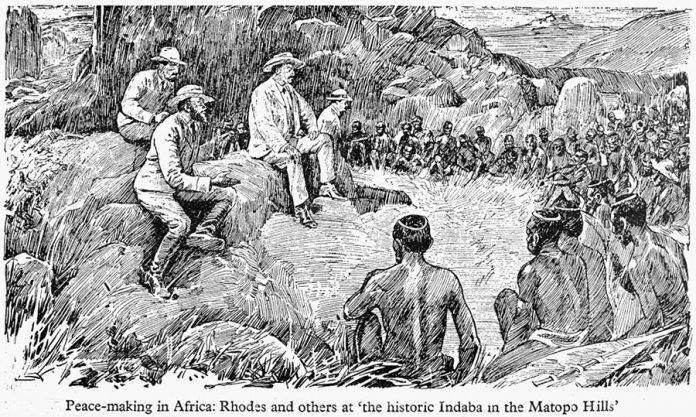 ‘IF you are conscious of who you are, you cannot be defeated, that is why it is strategic for whites to cost us to forget who we are’.

It is this consciousness which the British have been fighting all along and will still ever fight because it is key to keeping us under subjugation, key to restoring Zimbabwe and all its wealth to themselves.

It is a war they are fighting through various means, the formation of the Movement for Democratic Change (MDC) being key institutionalisation to reincarnating the robbery of our land.

When they came to this country to rob us, the British encountered a people who were fully conscious of who they were, sovereigns under God, custodians of a great heritage, a gift from Musikavanhu.

The robbery of our land was not a walk in the park.

Whites were fiercely resisted by a people who could never countenance living as slaves.

Reporting on the First Chimurenga, the British South Africa Police (BSAP) would refute that the Ndebele fought because they were fully conscious of who they were and wanted to reverse the armed robbery of their land, that they did not want to live as ‘dogs of the white man’.

Rather the BSAP chose to say the Ndebele fought because they were a superstitious lot who did not understand the vagaries of nature such as drought and rinderpest disease. They blamed these natural phenomena on the whites under the instigation of an equally foolish, ignorant and superstitious Mlimo who carelessly and irresponsibly sent them to their death at the mouth of the Maxim gun.

But history did absolve the Ndebele.

Barely 65 years later, they were up in arms against the white robbers in the Second Chimurenga and triumphed.

Surely it was not due to a second round of drought and rinderpest disease that the Ndebele took up arms in the Second Chimurenga.

There was one constant here. Consciousness as heirs of Zimbabwe under Mlimo who expected them to be custodians of His gift to them, their land and their wealth.

T.F.M. Tanser (1997) who was one of the whites who campaigned against the Ndebele in their fortress at Matobo in July 1896 and attended the first Indaba on September 28 1896 at Matobo, reveals, perhaps inadvertently who the Ndebele were and why they fought the whiteman.

He quotes Somabulane one of the Ndebele chiefs in attendance at this first Indaba who outlined their grievances to Cecil John Rhodes as follows:

“We are no dogs, the AmaNdebele, the sons of Khumalo, the isulu, children of the stars, we are no dogs.

You came and conquered.

The strongest takes the land.

We accepted your rule.

We lived under your rule but not as dogs.

If we are to be dogs, it is better to be dead.

You can never make the AmaNdebele dogs.

You may wipe them out but the children of the stars can never be dogs.”

The words of the chief struck a chord to all the Ndebele gathered.

The mood was tense and electric.

A wrong word or gesture could have sparked war there and then.

No-one dared to say anything or make any movement for quite some time.

It was not easy for the AmaNdebele, the owners of the land, to negotiate with the armed robbers of their land.

You cannot miss the sizzling anger against the white usurper, the total rejection of subjugation to the whiteman.

When you tell your supposed conqueror, ‘I am not your dog’, something changes.

You declare that your consciousness is not shackled by external manifestations of the power of the armed robber.

You defy the armed robber who now pretends to want peace.

When after a while Rhodes condescendingly says: “Let them speak, by whom and how were they made dogs,” Chief Somabulane speaks again:

“He drew a tragic picture of a happy wedding procession, lovely bride and a young man of standing.

Enter the local Native Commissioner who offers to entertain the wedding party at his station which he does.

But that night he sends for the maiden and exercises the right of ‘prima-noce’ and sends the weeping woman, maiden no longer to her husband in the morning.

She was a chief’s daughter.”

The chief (Somabulane) captures the depth of violation and trauma caused by the robbery of their land. AmaNdebele knew very well they could not live under these conditions.

It was anathema to accept whites among themselves.

It is a ploy by the whiteman to insist the Ndebele did not fight because they wanted to reverse the robbery of their land and wealth by the whiteman.

They had to suppress everything that revealed and celebrated the consciousness of the Ndebele in order to justify the armed robbery of their land.

They fought to deny that their land is really what was of prime importance to AmaNdebele.

Such distortions were meant to ensure that future generations would not be inspired by the courage and fortitude of their forefathers in rejecting the armed robbery of their heritage.

It meant that future generations would accept white rule because of this lie, that no-one ever cared about the land anyway, no-one laid claim to it and that their ancestors were as game in the forest, who lay no claim to the land they graze and inhabit.

It is treachery meant to rob people of their heritage, the collective consciousness of their people which has ensured their survival over generations.

Somabulane and the rest of the chiefs who were meeting with Rhodes knew they had defeated the whiteman.

They were meeting with Rhodes to strategise and weigh their options but they knew that ultimately they would have to get rid of the whiteman totally.

Tanser (1997) admitted the same about the conditions which forced Rhodes to call for Indabas:

“The long war of attrition which would be fought in the Matopos the nature of which favoured the Matabele and the guerilla warfare which would be long drawn out, and take the heavy toll of the white forces.Military deadlock had been reached.”

The war was also so costly financially and would impact negatively on the shares of the Chartered Company and that no development was possible without peace.

The Ndebele had driven the whiteman into a corner.

They had defeated the whiteman.

Rhodes was desperate for peace, but they chose the better option to wait until they could fight and defeat the whiteman more conclusively.

Their chance came in the Second Chimurenga as their grandchildren took the mantle.

They were conscious of who they were.

This consciousness carried their sons and daughters, grandsons and grand-daughters through to victory in 1979 and independence.

This was restoration of land to its owners which was inaugurated and celebrated on April 18 1980 and is celebrated by every Zimbabwean, every April 18 in perpetuity.