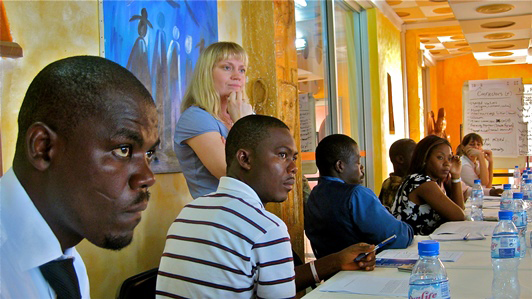 THE significance of education as a tool of regime change and a channel for promoting Western interests in Africa and the Middle East has been once again brought to the fore by notorious regime change agent George Soros who last week pledged over US$1 billion to fund a new university network to aid civil society and fight ‘authoritarian governments’.

In a speech at the recently held World Economic Forum in Davos, Switzerland, the Hungarian-born US billionaire who is well known for funding regime change said he will commit US$1 billion to start a global university to fight authoritarian governments and climate change, calling them ‘twin challenges that threaten the survival of our civilisation’.

Soros said his new project, called the Open Society University Network, would be an international platform for teaching and research adding that universities throughout the world would be able to join.

The university will be launched through a partnership of the Soros-backed Central European University and Bard College.

“As a long-term strategy our best hope lies in access to quality education, specifically an education that reinforces the autonomy of the individual by cultivating critical thinking and emphasising academic freedom,” Soros said.

He said the network was, ‘the most important project of my life’ and would build on the work of his Open Society Fund, which has invested billions of dollars into regime change projects.

This is not the first time Soros has used education as a regime change weapon, especially for Zimbabwe.

In 2003 Soros’ Open Society Initiative for Southern Africa (OSISA) established the Institute of Peace Leadership and Governance (IPLG) which, since then, has been churning out graduates whose skills are mainly relevant in the civil society and with it, the regime change agenda project.

Soros funds the ‘Peace Studies programme’ in local universities whose design and content is done by the United States Institute for Peace (USIP), an organisation that purports to preach peace while acting to the contrary.

Apart from the Peace Studies programme, OSISA has deployed pseudo academics from the civil society sector who specialise in publishing skewed articles for European and Asian journals based on propaganda material.

The pseudo academics, donning the garb of university teachers, engage in the crime of laundering propaganda into scholarship.

When it comes to the Open Society for Southern Africa’s agenda, Soros has decided to adopt a no-holds-barred approach to the regime change politick in Zimbabwe.

The director of this effort is a Zimbabwean called Siphosami Malunga.

Malunga is the executive director of the Open Society Initiative for Southern Africa (OSISA) based in Johannesburg, South Africa.

Malunga is the son of the late Sidney Donald Malunga, the then Member of Parliament for Makokoba.

From the time he finished his Law studies in 1994, Malunga’s CV is well decorated with various regime change accolades and programmes.

Between January 2001 and July 2003, Malunga was in East Timor as Trial Attorney in the Special Panel for Serious Crimes where he was trained in transitional justice; over trials of persons (including civilian, military and political leaders) for genocide, crimes against humanity, war crimes, and violations of the laws and customs of war.

In November 2003, he moved to Afghanistan to become UNDP programme manager on the Rebuilding the Justice System of Afghanistan Programme.

In 2007 he moved to Oslo, Norway to be governance and conflict advisor at the UNDP Oslo Governance Centre.

Other notable Zimbabweans who have worked with George Soros are Godfrey Kanyenze, Dr Reginald Matchaba-Hove and Isabella Matambanadzo.

This is in addition to the 350 Zimbabwean civil society groups called Crisis in Zimbabwe Coalition financed by Soros and the Open Society Initiative in Southern Africa.

Who is George Soros?

The highlights of Soros’s biography are well known.

Born to middle-class Jewish parents in Budapest in 1930 as György Schwartz, Soros – his father changed the family name in 1936 to avoid anti-Semitic discrimination.

After the Second World War, when the Nazi invaded Hungary, Soros and his family were forced to assume Christian identities and live under false names.

Miraculously, Soros and his family survived the war, escaping the fate suffered by more than two-thirds of Hungary’s Jews.

However, some records say Soros is a Nazi who turned in his fellow Jews to be murdered in German concentration camps and stole their wealth.

Feeling stifled in newly communist Hungary, in 1947 Soros immigrated to the UK, where he studied at the London School of Economics and got to know the Austrian-born philosopher Karl Popper, who became his greatest interlocutor and central intellectual influence.

George Soros has become notorious for funding regime change agendas in Africa and other parts of the world.

He works with both the National Endowment for Democracy (NED) of the United States and the British NED equivalent, the Westminster Foundation for Democracy (WFD).

The Open Society Initiative objective is, “to build and strengthen the values, practices and institutions of an open society throughout Southern Africa….to promote open markets and free enterprises where governments are pursuing programmes of economic indigenisation”.

In pursuit of these objectives the OSI says it has spent US$400 million annually in the last few years (Wikipedia).

Some of George Soros’ initiatives are ridiculous.

George Soros has many business interests in Africa — hence his involvement throughout the continent.

Zimbabwe is of special interest to Soros because of its rich minerals and other resources.

His regime change efforts are concentrated on Zimbabwe more than any other country in the region.

Chaitkin (undated) says Soros “got into the business of manipulating African governments in the 1990s when he was already heavily invested in British Imperial African plantations and mining”.

In Zimbabwe, Soros owns the Plantation and General Company, “chaired by Rhodesia-born Rupert Pennant Rea, a former deputy governor of the Bank of England, and a director, along with Lord Renwick, in the Rupert family Richemont group with assets in Zimbabwe and Russia.

“Through these holdings, Soros tried to take over the vast interests of Tiny Rowland in Lonrho Africa, the London and Rhodesia Mining and Land Corp.”

According to Chaitkin, George Soros’ current push to overthrow the Zimbabwean government was organised by British strategists working in conjunction with Zimbabwean white plantation owners between 2000 and 2005.

Further confirmation of Soros’ OSI being part of the NED is that Radio Free Europe/Radio Liberty which was once owned by the CIA was handed over to the Open Society Initiative in 1993.

It is strongly suspected that Soros reports to and takes orders from David Lowe the vice-president and international head of NED and NED’s point man in its regime change activities against Zimbabwe.

David Lowe has a long history of involvement in the politics of Southern Africa.

He is reported to have worked very closely with Jack Abramoff, his political partner, as part of an American-based spy network for the South African apartheid government.

Apart from funding non-governmental organisations (NGOs) and groups to promote the regime change agenda, George Soros has also been funding the MDC.

In April 2007, for example, the Open Society Initiative sponsored an MDC delegation led by the late Morgan Tsvangirai to Washington DC.

At that time SW Radio Africa which beamed from the UK, but was sponsored by the Office of Transitional Initiatives (OTI) of the US State Department, reported that the MDC delegation went to Washington DC, ‘to brief Western institutions like the Centre for Strategic and International Studies (CSIS) and the Woodrow Wilson Centre’.

The MDC officials listed above presented papers that sought to present a gloomy human rights situation in the country.

The briefing also appears to have been timed to influence proceedings at the EU-Africa meeting in Lisbon, Portugal, that year.

OSISA also funded Dr Gwatidzo of Doctors for Human Rights to fly to the United States to give an eyewitness account of the events of March 11 2007 to Congress.

On March 11 some MDC officials courted clashes with the police in a move calculated to present Government as a gross abuser of human rights and the MDC as the innocent victim of an oppressive system.

Dr Gwatidzo used the platform to exaggerate the extent of the injuries suffered by MDC officials during clashes with the police.

Soros has been associated with ‘big’ events in history.

He is infamous for currency trading practices.

In 1992 he is said to have made US$1 billion in one day by speculating against the British pound.

In 1997 Prime Minister Mahathir of Malaysia accused Soros of speculating against national currencies of the region leading to the Asian crisis.

In the 80s Soros was found guilty by a French court of insider trading.

He paid a huge fine against the judgment.

The collapse of the Soviet Union has been associated with Soros investments in the destabilisation of communism and because generally his objectives are similar to those of the CIA, Soros’ Open Society Initiative is strongly suspected to have ties with the CIA.

The Chinese government has also charged that the Soros Fund for the Reform and Opening of China had CIA connections (Julie Bajolle, October 2005).

Soros is a vulture profiting from death, from conflict and from human suffering.