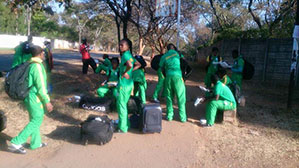 WHENEVER they don that yellow jersey, the Mighty Warriors strive to deliver a golden performance; even in green they are as sturdy as the stems of tobacco that we have become experts at producing.
When in action, one can never guess the trials and tribulations that that these girls, again and again, undergo.
One is forced to ask: Who do these girls belong to?
The recent ill-treatment of the Mighty Warriors after returning from the Rio Olympic Games in Brazil has sadly become nothing out of the extraordinary, sad to say it has become the norm.
Various stakeholders, including sports governing bodies have never really come through for the lassies.
Men’s soccer teams have received and continue to receive a lot of moral and financial support, but the Mighty Warriors struggle for any tournament.
The Mighty Warriors beat the Indomitable Lionesses of Cameroon to make their maiden appearance at the Rio Olympics.
While the authorities had time to prepare for the games, everything about the preparations, including their return from the games, was in shambles.
Although they were defeated heavily by the well-prepared and renowned women’s teams that included Germany, Canada and Australia, it is not a secret these girls are heroines in the eyes of their fans.
But they have not been treated as such.
We have very sad Mighty Warriors.
The Rio Olympics were an ultimate achievement and still recognition has not come their way.
“The nation will only remember and think of us when we next qualify for some other tournament, but before that, we are nonentities, we do not exist,” said a Mighty Warrior who spoke on condition of anonymity.
“We really do not matter, we are not anybody’s priority.”
Locally, how much do we even know about the individual players?
It had to take the British Broadcasting Corporation (BBC) for us to know the profiles of some of the players.
They found the story of Mavis Chirandu fascinating enough to accord it airtime.
Talking to yet another Mighty Warrior, the hurt, dejection and disappointment is palpable.
“Ours was an arduous journey to Rio as we faced one challenge after another,” she said.
“The only good time we had was in Rio because the Brazilians made us feel like real sportspersons participating at the highest level.
“But locally our talent and skills seem to mean nothing (at home).
“With support, we could be much better and I am sure we could develop into some of the best athletes on the continent.”
The players have soldiered on without too much complaining, it’s only when the situation has become untenable that they have threatened to boycott.
There was a time when the team was fed sadza accompanied by pumpkin leaves during camp.
“We have not complained that much because we love what we do,” said Mighty Warrior who refused to be named.
“We did not even complain about being put up at Bindura State University, but for a team camping for a major tournament, responsible authorities could have done more for us.
“We thought the day before departure for Rio, we would stay closer to the airport, that is in Harare, but imagine we were driven back to Bindura.”
It was in Brazil, she said, where they felt like stars.
“When we arrived in Rio, we were surprised to see Brazilian tour guides waiting for us and they made sure, going out of their way, that we were comfortable,” she said.
“Everything in Rio was good.
“Personally, I enjoyed my stay there; from the training facilities, accommodation, food and the people in general.”
With the superb conditions and support, particularly from Brazilians, the Mighty Warriors gave their all which was, however, not sufficient.
They lost all their games.
“Although we were beaten, we felt the Brazilians were 100 percent behind us and we felt like champions,” she said.
The Mighty Warriors lost 1-6 to Germany, 1-3 to Canada and 1-6 to Australia.
“I’ll forever cherish those moments,” said the Mighty Warrior.
It is understood each soccer player who appeared at the Olympic Games was supposed to get US$1 000 per match from FIFA.
The girls are yet to get the monies, in this case US$3 000 per player.
According to the Mighty Warriors, Samsung allegedly donated latest Samsung Edge 7 to every athlete who participated.
While other teams got theirs, the Zimbabwean girls are yet to benefit.
“When we got home, players from Bulawayo were given US$20 and those from Harare US$5 for transport to our respective destinations,” she said.
“Our reception was poor, we lost, we did not expect much but our travelling logistics were supposed to be dignified.
“Whoever is responsible for us could not even provide us with lunch until a well-wisher provided it.”
That is the reception that capped the journey from the Rio Olympics.
However, Zimbabwe Olympic Committee (ZOC) board member, Thabani Gonye, said ZOC had done all it could for the girls.
“As ZOC we are responsible for accommodation during camp and their stay at Olympics and we also handed them US$500 each for representing Zimbabwe at the Olympics,” said Gonye.
“The allowance was given to every participant who went to the games.
“Those who promised the girls anything must definitely deliver.”