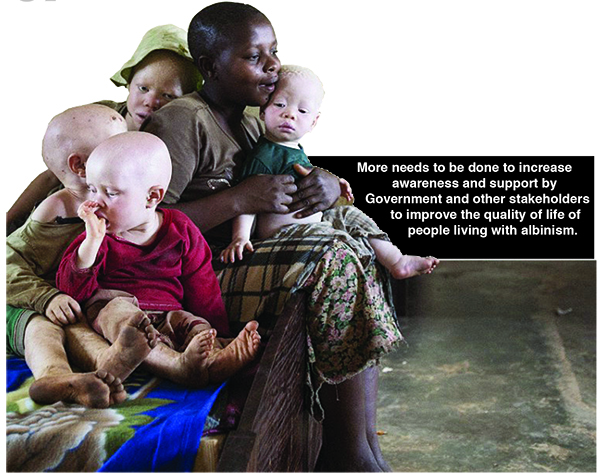 MEMORY MUNYORO, a mother of three children, two with albinism attests to the devastating effects of ignorance and prejudice.
“It was in 1988 at a clinic in Zaka, Masvingo,” she said.
“I had just given birth to my first born baby and I was in high spirits.
“However, my joy was short-lived as the midwives started spreading rumours that I had given birth to a coloured baby, insinuating I had slept around.
“The rumours affected me knowing I had done no such thing and when I left the clinic, no one recognised that the child had albinism and thus I was not counselled.”
However, Munyoro is one of the few fortunate women as her husband and family stood by her.
Her mother-in-law was familiar with the condition because in her family were people with albinism
And since it is hereditary, her grandchildren have albinism.
Munyoro said as a first time mother she would sometimes apply petroleum jelly on her child, Aldridge Munyoro now 27, and realise that he would develop blisters.
It was only after she had been advised to visit a dermatologist that she was taught the appropriate lotions to apply on her child’s skin.
She learnt how to take care of her child such that when baby number two, Adileth now 24 came, also with albinism, she knew how to take care of her.
Munyoro recounts how her children were tormented by being called ‘musope or murungudunhu’.
However, today Munyoro is a proud mother of a university graduate, Aldridge, who holds a degree in Social Work from Wits University (SA), while Adileth is pursuing a degree in Environmental Management at UNISA.
Her experience compelled her to join the Zimbabwe Albinism Association (ZIMAS) as a voluntary worker in 1998 where she is part of a women’s support group providing counselling and help to mothers who have children with albinism.
“Most men cannot stand the sight of having a child with albinism, so they dump their families and this has resulted in most albinos being destitutes because of lack of family support,” she said.
“Society still stigmatises people with albinism hence there is little support for them.”
Munyoro said more needs to be done to increase awareness and support by the Government and other stakeholders to improve the quality of life of people with albinism.
Albinism is an inherited genetic disorder in which the body fails to produce enough melanin, the pigment that is responsible for giving skin, hair and eyes their colour. A lack in melanin can lead to many serious health conditions of the skin such as lesions and skin cancer
Skin cancer is a serious health risk for persons with albinism as exposure to ultraviolet rays damages the skin, resulting in skin cancer that is often fatal. ZIMAS states that most of their members die of skin cancer.
People with albinism are supposed to use sunscreen lotions with a sun protection factor (SPF) of 30.
This normally costs no less than US$7 and depending on the area, a person needs an average of four to six bottles per month.
Apart from skin-related health concerns, persons with albinism are more likely to suffer from a range of eyesight problems like photophobia – a condition in which bright light hurts the eyes and short-sightedness.
Some African countries are worse in terms of their treatment of people living with Albinism.
Some believe albinism is the result of a curse from the spirits while others erroneously think Albino body parts are thought to bring good luck and prosperity.
In Tanzania, Democratic Republic of the Congo and Burundi, albinos are thought to contain ingredients that bring luck, fertility, wealth and ward off evil spirits.
In Tanzania, for example, traditional healers and witchdoctors have long considered the body parts of albinos as being essential to their magical recipes.
The general belief in Tanzania is that expensive concoctions made from albino limbs, genitals, hair and skin bring good luck, especially to those in business.
This has led to many albinos being killed.
However, in Tanzania, police have intensified arrests of people suspected of being involved in the murder of albinos.
Some people living with HIV and AIDS have been misinformed that having sexual intercourse with albinos cures the disease.
This has led to an increased number of people living with albinism being raped and infected.
While there are no official statistics of people living with albinism, ZIMAS estimates that 39 000 have the condition in Zimbabwe.
Currently ZIMAS membership stands at 10 000 because most people, particularly from the rural areas, are not members.
The albino community in Zimbabwe argues the Government still has a lot to do to lessen their plight.