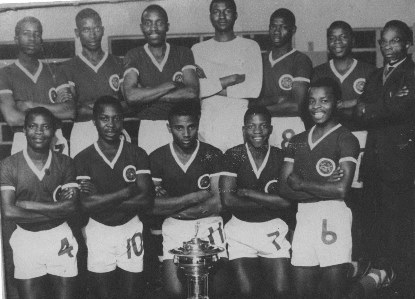 THE story of a struggling African sportsman before independence is incomplete without Dynamos Football Club.
Before independence, the world’s most loved game became a basis for African independence and political change to a large extend.
The formation of Dynamos FC was in response to the establishment of an all-white Salisbury Callies FC in 1962 that entertained no black player.
That same year two black teams Salisbury City and Salisbury United were disbanded and some players from the two formed the nucleus of the new team, Dynamos, in 1963.
Soccer was introduced in colonial Africa for different reasons while elitist sports like cricket, hockey, tennis and rugby remained a preserve of the white.
Analysts note that football was introduced at mission schools as a way to promote good behaviour, sobriety and cooperation among blacks while the elitist sports were available at whites only schools.
Teams like St Paul’s Musami who were the league champions in 1966, is one example of a missionary’s success in introducing the game at missions.
Mines and companies formed teams that were meant for blacks with a few incorporating white players like CAPS United, Rio Tinto, Mhangula and Metal Box, among others.
Dynamos after being formed in 1963, the same year the Zimbabwe African National Union (ZANU) was found, represented the aspirations of the povo who were under oppression.
Among the founding members of Dynamos were Patrick Dzvene, Obediah Sarupinda, Richard Chiminya, Nathan Maziti, Bernard Mariot, Josiah Akende, Alan Hlatwayo, Freddy Mkwesha, Ephraim Mpariwa, Jimmy Finch, Alois Meskano, Sam Dauya and Jairosi Banda.
Dynamos became popular within months as the impact of nationalism rose.
A victory over an all-white team was celebrated from inside.
That psyched the blacks and they believed they could fight the whites with success ven away from the football pitch. Problems were on the refereeing at that time.
No black referees were allowed and the whites saw this as a way of instilling white supremacy on blacks.
Biased refereeing was the order of the day as colour-bar played a part.
Boxing and athletics were also part of the sports that the blacks participated in without much hindrance as success was easily measured by ability.
In the African townships of Harare now Mbare and Highfield, boxing was a popular sport.
The likes of Langton ‘Schoolboy’ Tinago, who came from Gweru made it in the sport winning various Zimbabwean and Commonwealth titles between 1960 and 1980.
After independence a number of blacks made it in the game including, Proud Chinembiri, among others.
Problems were in the elitist sports where the remnants of colonialism are still present.
Cricket, hockey, tennis and rugby were limited to elitist schools where the whites enrolled.
Ellis and Ernest Cashmore in their book Making Sense of Sports note that cricket was deliberately not introduced to Africans as it represented civilisation of the white man.
“During the colonial era, cricket, one of the world’s oldest organised sports, was both a symbol of Britain’s imperial dominance and a conduit for civilisation. “The belief was that, if you teach subordinate groups of the empire rules, etiquette and proprieties of the gentlemen’s game, then you were helping civilise them out of their barbaric ways. For long, the administrative power of the sport, like that of the empire, was in the gasp of England.”
Participation of the blacks in the elitist sport was minimum during the colonial era worse off in cricket in Zimbabwe.
The game in the continent has two if not three recognised cricket playing nations South Africa which has few black players, Zimbabwe and Kenya whose game has gone down of late.
The Zimbabwean story is sad as it took more than 15 years after independence for a black player to be included in the national team.
Henry Olonga who learnt at elitist Plumtree High School was the first black to play for Zimbabwe in a Test match in 1995 before being corrupted by white racists.
From time to time, the flagship team was white dominated and making it into the national team was impossible for black players.
The whites controlled the running of the game making it impossible for hundreds of talented black players to be included.
The turn of the century saw a change in the game with a quota system being introduced on selection criteria.
White players contested that, including captain Heath Streak.
That was the same time the Land Reform Programme was introduced. A number of white players protested and left the team leaving vacancies for black players and a few whites.
In hockey, the country has little success in the game as the sport remained elitist from the days of colonialism.
In present day, only former Group A schools play the game.
In 1980, an all-white team represented Zimbabwe at the Moscow Olympics, evidence of sporting bottlenecks in colonial Zimbabwe.
Tennis and rugby have scored notable success as the two sporting disciplines are played even in the high-density areas.
Several tennis facilities were built in the high-density areas – though vandalised – but the uptake of the two games is better.
Black and white players form the national teams of the two disciplines, while the administration has the same composition. During the colonial era, a man’s ability was not important to participate in a certain game, but the colour.
However, independence brought freedom and changed all that.