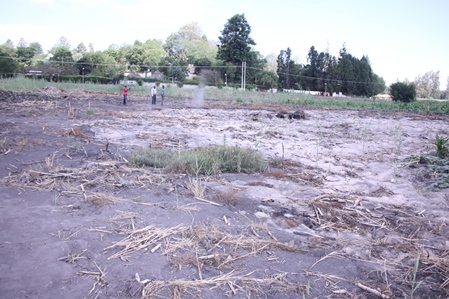 THE squatter camp situated between Borrowdale and Greystone Park (west of Stratford Drive and north of Charlecote Road) is located on a wetland.
It is probably one unique feature that could not only become an energy resource, but also pose a huge health hazard to those living around it.
The ‘peat fire’, as it is commonly known because of its features, which measures 0,1181 hectares on 21,7 hectares of wetland, has high underground organic content and is heavily aerated.
Fires are burning to a depth of 50 centimetres and the burnt area has whitish sandy clay soils.
The wetland soils vary from dark sandy clay soils to very dark clay soils widely believed to be ideal for good harvests once put under crop cultivation with maize, beans and sweet potatoes.
With a visible City of Harare warning sign that there is hot ground, one would not expect people to be living in the area.
To confirm the danger, random interviews carried by The Patriot confirmed that there have been various people in the area who got fire-related injuries.
Fungai Chiwawa, Benard Madzinga and Mai Fungai who live in the area said it usually smokes in the early morning hours and in the evening making it hard for people to breathe.
The fire, they said, is said to have been there for many years now, but seems to be shifting.
The holes and cracks in the ground seep some smoke and fire once the day temperatures cool and the small water pools that provide squatter families with water have since dried up.
The three said whirlwinds in the area can last up to 10 minutes and go up at least nine metres into the sky forming a heavy cloud of smoke.
Environmental Management Agency (EMA) information and publicity manager, Steady Kangata said the area known as a ‘peatland’, is a thick water-logged organic soil layer (peat) made up of dead and decaying plant material.
“Peat is formed from decayed vegetation in swamps,” he said.
“During our assessment, we observed that the fire site was characteristic of peats, it is rich in organic matter and the ground has a lot of deep cracks hence it is heavily aerated.
“This allows the fire once lit to slowly spread through the peat for a long time since oxygen which is a critical factor in the fire triangle will be available.
“We recommended that the fire be put out by water and a more detailed soil survey be done to quantify the organic content across the wetland.”
According to Wikipedia peat (turf) is an accumulation of partially decayed vegetation or organic matter that is unique to natural areas called peatlands or fires.
The peatland ecosystem is the most efficient carbon sink on the planet because peatland plants capture the carbon dioxide which is naturally released from the peat maintaining an equilibrium.
Since organic matter accumulates over thousands of years, peat deposits also provide records of past vegetation and climates stored in plant remains, particularly pollen.
Hence they allow humans to reconstruct past environments and changes in human land use.
A research paper published by United States Environmental Protection Agency (EPA) shows that peat wildfire smoke can increase risk of serious respiratory and cardiovascular effects.
The director of EPA’s environmental public health division, Wayne Cascio said: “peat fires burn at lower temperature, produce more smoke and generate chemicals that are more irritating to the eyes and airways.”
Such diseases as chronic obstructive pulmonary disease, asthma, pneumonia and bronchitis, and symptoms of heart failure will therefore be common in people living around these areas.
Since water or foam cannot effectively penetrate thick layers of organic material, peat fires are extremely difficult to fight, but can cause serious loss of property, destruction of forest acreage and loss of life.
Despite all this, the International Peat Society (IPS), says since the Second World War there has been a big change in attitudes towards the use of peat as an energy source and the role of peatlands as a natural resource.
The IPS says in the 1950s peat was still regarded as an important fuel in many countries in Europe and large development programmes were being undertaken in Ireland, Sweden, Germany, Denmark, Finland and in the member states of the then Soviet Union.
In Canada and in the USA, studies were conducted in the 1970s and 1980s to evaluate the use of peat as fuel.
The outcome of these studies was that peat is not competitive, owing to the availability of cheap oil, coal and natural gas in those countries.
Only in some areas in the midlands of Canada is peat used today on a minor scale as a local fuel.
In Canada and the USA, peat is used as growing media and today Canada is the leading country in the world in terms of volume of horticultural peat produced.
This has led to the fact that Canada is also one of the major players in the world community as far as environmental issues related to the use of peat and peatlands are concerned.
Efforts to develop the use of peat as fuel in Central Africa and South-East Asia have seen Burundi minor peat operations established with the aid of West European countries.
However, major environmental concerns regarding the use of energy peat are principally the same as those for other fuels.
Concerns about the adequacy of peat resources and the sustainability of their use has activated nature conservation bodies to increase the number of protected mires, and special mire conservation programmes have been developed in different countries.
What will then become of the Borrowdale wetland in Harare, particularly the families squatting there?
How far the peat fire will go still remains a mystery and it remains to be seen if relevant authorities will get equipment to suppress the peat fires.