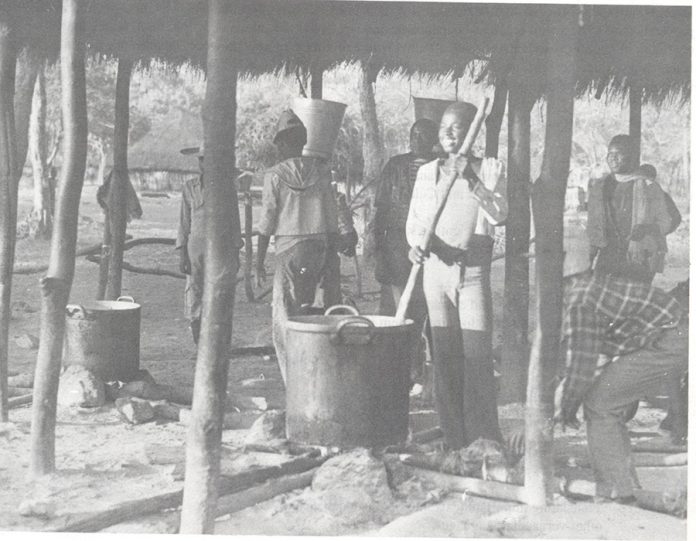 WHEN we landed at Matenje, it was just pristine forest, a piece of land gently sloping towards the Mavhudzi River. There were lots of trees, which were perfect for cover, and plenty of bamboo, which provided material for furniture.

Across the river was Mavhudzi Base One, a school that had been started for children from Chifombo, Zambia, and those who had found their way to the Tembwe Military Base.

Our camp then became Mavhudzi Two or Matenje Base, but the name that prevailed was Matenje Base.

We had to make it a home.

It was going to be our operations base from then on because this is where the party had decided we were going to be.

As I mentioned in a previous article titled ‘ZANU averted a massacre’, the commanders and the children were not armed although the top hierarchy of the camp command as well as other commanders were fully trained.

Our only protection was a FRELIMO commando stationed a kilometre-or-so from the camp.

In case of an attack, this was our resort.

This made the children very nervous.

This was the first time they had been encamped without protection from ZANLA forces.

They did not feel at peace.

These were children who had survived the Nyadzonia and Chimoio massacres.

The trauma was telling on them.

Sometimes when a land cruiser drove down the slope into the camp, it would sound like a bomber swooping down to attack.

It was not easy for them.

Some things that had been too harsh in their lives would come back and they would start screaming and running into the forest.

The task at hand was to build a new home.

The policy that was in place wherever the children settled in the camps in Mozambique was that which had been decided by Cde Sheba Tavarwisa and colleagues when they set up the first ZANU School at Chifombo in Zambia – the policy of self-reliance.

There was no detachment nor brigade of ZANU or FRELIMO that was requested to come and build a school for the children. The children, assisted by their commanders, put up the school.

They found the appropriate wood in the surrounding forest and built beautiful barracks and nicely thatched them.

From the bamboo, plentiful in the surrounding forest, they built their furniture (tables, desks and benches).

No-one slept on the floor.

They made their own beds from wood and mattresses from grass which were very comfortable.

It is the way we were.

The postos for the commanders were also built in this fashion. My posto was next to the crèche barrack.

I had my grass mattress which was quite comfortable.

Since we had no way of ironing our clothes, we folded them nicely and laid them between the base and the mattress and the next time we wore them, they were as neat as we would want them.

The barracks and postos were not fitted with doors, thus the doorways were not secured.

Each would have two-or-three doorways so that in case of an attack, one had maximum chances of escaping.

What would seem strange now, but was totally normal then, was to sleep in a camp with hundreds of others with no doors to your posto and still feel safe.

We built ablution blocks that were thatched all round but we all bathed at the river in the mornings and evenings. Mostly there was no soap, no vaseline nor lotion, but we bathed all the same and managed to feel fresh.

One thing I discovered was that first when you bath and there is no lotion nor vaseline of any kind, the skin cracks and pales, but with time, it begins to secrete its own oils and after sometime it looks normal as if you have applied some emoluments of some kind.

The hair, however, was a different story.

It did reflect the malnutrition; it would turn yellowish with no lustre, no life.

Our clothing came from donations from Scandinavian countries mostly.

For the most part, these were secondhand.  But once in a while, there was some brand new stuff. I will never forget the day I got a new blanket from the Party.

For clothing, things were mostly normal for us.

We could make do with the donations for the simple reason that no-one with an extra shirt, trousers or dress would hold on to it while another comrade went naked; it never happened.

If you had something you were not using that day and a comrade had nothing, you gave it to him/her; no-one enforced this, it was the ethos that was so deeply rooted in us, you could never undo that.

Food however was a different story; it was never enough.

We still depended on donations although at Matenje we made a huge garden.

The children worked very hard and we were able to harvest different kinds of vegetables.

However, the food was never enough.

Sometimes we would get donations of dry peas only, which would be boiled and mashed but there was no salt.

The taste was incorrigible but it quietened the pangs.

Sometimes we got boiled maize corn (mangai), no more than a handful for the day; other times a small tin of Norway sardines in edible oil and we would share the six small pieces of fish between the three of us and there would be nothing else, no sadza to go with the fish and that was the meal for the day.

To open the tin we would scrape the edges on a rock until it opened but the challenge was we would lose the edible oil which we could not afford to do.

Therefore, as soon as we had a little opening along one of the edges, we would sip all the edible oil and continue with the task of opening the tin.

It was easier when there was sadza even without relish of any kind.

We would comfort ourselves with the sadza.

On some days there would be nothing to eat.

We would strain our ears for any sound of lorries coming with supplies.

We would anxiously watch for smoke from the guzunya (kitchen) but there would be nothing.

But the malnutrition had its toll on the children.

They would develop scabies and gastro enteritis mainly from the river water.

We bathed in the river downstream, but drew our water for drinking and cooking upstream, but still it was not the ideal situation; but we had to ensconce.

After the first month at Matenje, I developed some measles; small watery ones between the fingers but thankfully, they did not spread to the rest of the body and they cleared within a short period of time.

We had a clinic manned by qualified medics, mostly trained in the camps.

We had a fair supply of medicines but still we lost comrades, mostly children, from malnutrition and disease.

It was the saddest thing.

One more mother who would be told: “Your child did not make it back.”

This broke my heart as we buried each child and sang, fist raised, facing west, in the direction of Zimbabwe: