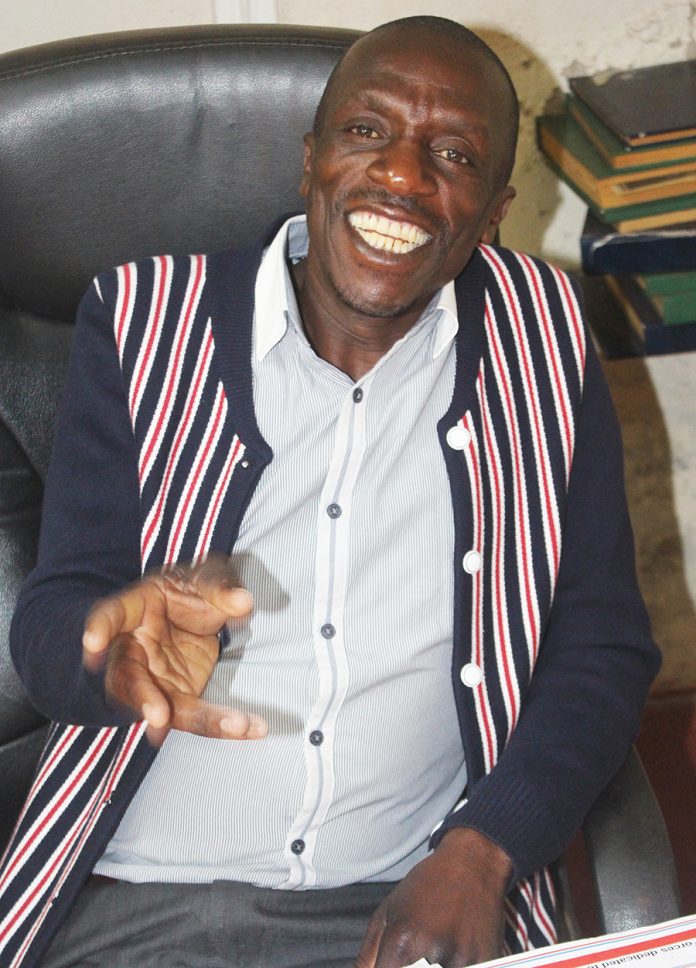 MOST yesteryear television viewers still vividly remember the Sun Jam advert in which a man on a bicycle with a Sun Jam tin chases after a bus to give the tin of jam back to the person who had left it behind at a bus stop.
The man on the bicycle is one of the talented actors from Mabvuku and probably one of the best to emerge from this country.
His antics were hilarious; the way he walked and talked left many in stitches.
That man is none other than Stewart Sakarombe and his face is synonymous with so many television dramas, local films, roadshows as well as short comedy plays and skits on various social media platforms.
The actor, whose parents hailed from Watsomba, Mutare, was born in Highfield, Harare, and grew up in Mabvuku where he received his education.
Patriot Arts recently caught up with Sakarombe, who is still acting in dramas.
“During my primary school days, we used to go to Mabvuku Hall to watch action films from Bruce Lee, James Bond and many others which were provided by Mandebvu and Nyamhanza. We would wish we were those revered actors zvekuti ndakatombominyuka gumbo ndichiteedzera Bruce Lee,” said Sakarombe.
“I wanted to be a musician because my mother led the SDA choir in Mabvuku and I used to appreciate her voice, but I changed my mind after my Grade 7 teacher beat me up when she found me singing in class with such a great voice but failing to take part in the school choir.”
His uncle, Mafion Kanyangarara, who used to do voice-overs on the action commercial radio drama, The Razor Man on Rhodesian Broadcasting Corporation now Radio Zimbabwe, also influenced him at an early age to appreciate drama.
“When I finished secondary school in the late 1980s, I joined the Mabvuku Catholic Drama Group which comprised youths within the church. I was not a member of the church but I saw it as a stepping stone to an acting career,” said Sakarombe.
“I later joined Mafara Arts which comprised John Chinosiyani, aka Mhekiya, and many others. Mafara Arts was directed by John Sibenke who was a teacher at Tafara 1 Primary School. Sibenke is well-known for penning the play My Uncle Grey Bhonzo and acting on Studio 263 as Shereni.
“He groomed many actors who went on to grace our local television and radio stations. At one stage, there were more than 13 drama groups which he used to help in Mabvuku.”
The groups resulted in the emergence of popular names like Kizito Gamaliel, Peter Kamupira and Lazarus Boora, aka Gringo, who grew up and later acted alongside Sakarombe.
Mackey ‘Sakamuzi’ Tickeys, Antony Tongai, Simon Shumba, aka Mutirowafanza, and Parraffin also passed through Sibenge’s hands in Mabvuku.
“In 1991, I made a breakthrough when I acted in the multiracial cast film And To My Nephew Moses… which serialised on television,” said Sakarombe.
It is in this film that Sakarombe managed to interact and take notes from established actors who boosted his confidence.
He later featured in another popular TV drama Ndezvemeso, penned by Thompson Kumbirai Tsodzo.
His first feature film as an actor was More Time, which also featured Prudence Katomeni-Mbofana and David Gwenzi.
By then, Sakarombe was a household name in the film industry such that corporates were hunting for him for advertisements.
One advert in which he unforgettably featured was the Sun Jam commercial shot at Musami Cross.
“I took a break from dramas and concentrated on industrial theatre (roadshows) and television adverts as they were paying more,” said Sakarombe.
“When I took part in dramas, I made sure they were commercial dramas like Mopani Junction, a series we did on Radio Zimbabwe.”
He later joined the Bulawayo side Amakhosi as both an arts administrator and actor for two years, working with Continueloving Mhlanga.
That was when he met the director of Mambokadzi Dancing Group Enisia Mashusha, when she was still with Amavitikazi Dancing Group.
When Mashusha decided to break away from Amavitikazi, it was Sakarombe who suggested the name Mambokadzi.
In 2006, Sakarombe joined Studio 263 as assistant director as well as playing the role of Detective Hamadziripi.
After acquiring vast experience in the industry, he teamed up with a colleague, Chatisai Butau, to form Mukai Drama Group which is used by several parastatals and companies in industrial theatre and marketing of brands and services.
“In order to survive in the acting industry, actors, like other artistes, have to be innovative by doing comedy skits and putting them on various social media platforms like YouTube and facebook and then we use the number of likes as a way of marketing our popularity to corporates,” said Sakarombe.
The group is presently synonymous with GMB functions.
The talented actor also featured in films that include Escape, Gameplan, Playing Warrior, The Team and Tirabhuru in which he acted as the cruel shop owner Vambe. He also took part in a BBC production, The Poacher.
The sky is the limit for Sakarombe who is currently penning two feature films as he wants to take advantage of the ongoing digitisation process.
“I want to call it quits after successfully completing these two projects, that is my wish,” said Sakarombe.
The artiste is blessed with two daughters, Sasha (24) and Sally (16).