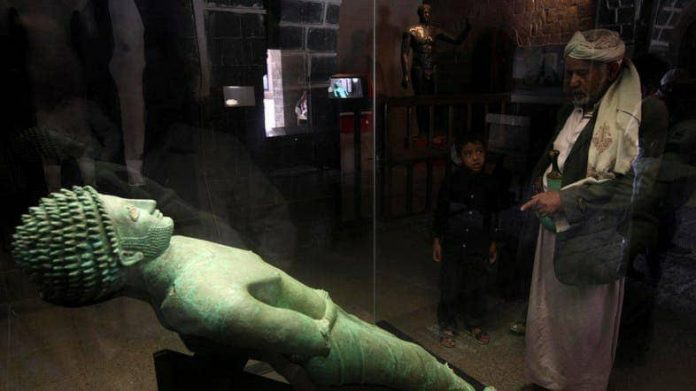 BLACKS have been largely robbed of their history and heritage as a measure to keep their potential down.

Thus making them subservient to newer races that currently occupy their lands.

Arabia was full of blacks, up until long after the time of Muhammad.

But with the growth of Islam and palaces like Mecca came the need for non Arabian empires to conquer this land.

With the coming of the Ottomans and later the Turks, Mecca now resembles a land of non black people who cover their bodies in cloth to fend from the sun’s heat.

The very word Arab now seems to have no connection to black people at all.

Yet the depictions of ancient Arabs were stone engravings of tall, shirtless black people with long locks and riding camels in the dessert.

Even long after this period of engraved drawings on metal surfaces, Arabians including Muhammad braided hair to keep it from retaining dust while crossing the dessert.

Only black people with kinky and curly hair can consider altering their hair in so many forms, especially in times of old.

For it does not come naturally to other races with straight and slippery hair.

One cannot dispute rock hard evidence in metal or stone.

Besides conceiving to the fact that all the ancient artefacts of Arabia, Egypt, Iran (Persia), Iraq (Babylon), Syria (Assyria) and Israel were depictions of black people, the time they were carved, molded or engraved predates the emergence of the contemporary races that reside in the above stated places.

No other race predates them, be it in Asia, Africa, Europe or America.

Simply put, the evidence suggests that black people solely occupied much of the earth for extended periods of time before the emergence of other races from their loins owing to mutations, climatic adaptation, skin whitening conditions like vitiligo and miscegenation.

Wherever these races went they would run into black heritage sites and artefacts.

In Europe the first inhabitants of places like England were early Bushmen who painted in caves. They wore locks and their women had pronounced hips and buttocks which they depicted in stone sculptures that are now called black Venuses.

The same took place in Greece where African clay pots, rock paintings and sculptures of blacks (Ethiops) make up their earliest national relics.

The very ancestor of the Greeks and Macedonians, and the father of the southern European race, including the Latin, was a black man and thus the ancient Greeks greatly revered blacks calling them ethiops meaning burnt face.

The people of Mesopotamia were no different.

This evidence can be found in Israelite stone engraved art which carries depictions of their captivity in the hands of Babylonians and Assyrians.

The artefacts are very old, stretching back to as long as 700 BCE.

The Israelites look unrefined much like the blacks who wear locks contemporarily and are called Rastafarians probably because some of them, particularly the musicians yielding instruments were Nasserites.

In the stone drawings, both the captors and the captives are black, though the Hebrew people seem slightly taller.

This confirms that the Shemites with exception to the red and hairy race of Edom were an Afro Asiatic people and resembled Hamitic groups like the Egyptians.

So if one speaks of Shemitic features, they ought to refer to those that they see in such ancient Hebraic art, not those of Caucasoid peoples which had no place in that region in times of old.

In Yemen, there were life size bronze sculptures made depicting a Judaic group which entered Arabia (Sheba) to settle permanently in the time of King Solomon.

These Israelites entered via Ethiopia and were eventually stationed in Saba (Yemen). Their depictions are identical to those of the Israelites that were being held captive by Assyrians as discussed earlier.

This Israel – Saba connection was an exportation of Hebrew people, culture, monuments and symbols.

These would stretch into Ethiopia to found places like Axum, and all the way to Southern Africa were they sailed to since their days back in Israel to procure gold, hardwood and wild animals among other things.

In Saba they built Sabaean style temples with a typical fashion of making a large encirclement with high walls made of stone bricks procured from the rocks beneath and around the construction site.

Other rocks would be used as natural pillars and foundations that would be coupled with the man made structures.

These included stairs, walls and conical towers that are called minarets in Arabic. There are even older conical towers in Yemen which were made of burnt clay.

There are numerous of these ancient monuments in Yemen, including the Thula and Kawkaban ruins.

Crossing into Africa, we find Sabaean style temples in Mapungubwe and Great Zimbabwe.

Besides this we have other Sabaean traits such as evidence of terrace farming in Nyanga, Sabaean inscriptions in the Machema walls of Mapungubwe, and the descendants of these Judaic Sabaeans called vaShavi (vaRemba).

No whiteman had entered this region because they were still in their dark ages.

Moors (blacks) were in Europe at this time, again dominating whites in terms of sophistication.

The brick laying style of Saba and Zimbabwe was introduced to Europe by these Moors, only with the added use of mortar in cementing bricks together and plastering.

This is how the modern style brick construction came to be. Although today, people think it was whites who came up with it.

Evidence that it was blacks who were behind all the civilisations of old can especially be found in south-east Asia were the same builders travelled east by sea.

These blacks built stone structures with conical towers in places like Angkor Taw of Cambodia, Barubador in Indonesia and numerous other ancient monuments.

Besides this, they carried depictions of the builders and individuals they were commemorating the stone monuments to.

These gigantic sculptures of stone, at times the size of a mountain, depicted black people with all the full facial features  like big eyes, large nostrils and thick lips that other races lack.

There were also numerous miniature and life size stone and metal sculptures that depicted these blacks with bantu lock and a conical tower symbol above their heads.

It is my hope that with this information, people will have a new perception of the world of old. One that was inhabited exclusively by blacks, who pioneered and founded the trends of culture, religion and civilisation.

With such knowledge Africans should not look down on indigenous knowledge, ancestral roots and traditional customs and values.

These must be regarded sacred and ought to only be upgraded rather than down trodden by modern world trends.

To the blacks who are descendants of these great men of old we say, let this information strengthen your belief in yourself and your race.

Knowing what great things you accomplished in the past unlocks this potential, thus the purpose of this article.