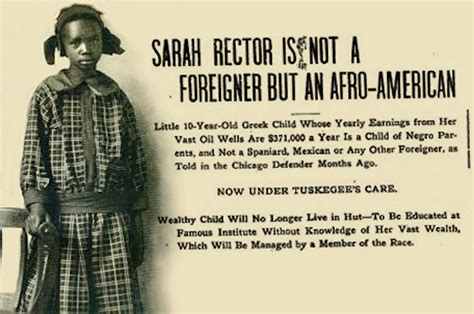 ON January 15 1914, a rather strange headline appeared in The Kansas City Star: ‘Oil made pickaninny rich’:
“Oklahoma girl with US$15 000 a month gets many proposals – four white men in Germany want to marry the negro child that they might share her fortune.”
That rich Oklahoma girl was Sarah Rector – an African-American and a member of the Muskogee (Creek) Nation, best known for being the ‘richest coloured girl in the world.’
Born in Indian Territory on March 3 1902, to Joseph and Rose Rector, Sarah received a land allotment like all those who were members of the Creek Nation when Oklahoma became a state in 1907. That land allotment would later make Sarah one of the first African-American, female millionaires in the US.
Sarah’s family was entitled to land allotments under the Treaty of 1866 made by the US with the Five Civilised Tribes. However, these lands granted to former slaves were usually considered inferior, infertile, rocky lands of poorer agricultural quality, with fertile land being reserved for white settlers.
Another problem Sarah’s family faced was the US$30 annual property tax on her parcel and at one point her father wanted to sell the land because he could not afford to pay the US$30, but luckily for Sarah, the Muskogee County Court denied his petition.
He decided it would be best to lease Sarah’s parcel to the Standard Oil Company. As it turned out, he made the right decision and, in 1913, independent oil driller B.B. Jones produced a ‘gusher’ that brought in 2 500 barrels a day. Little Sarah now received an income of US$300 per day (over US$7 000 in today’s money) and her guardianship was switched from her parents to a whiteman named T.J. Porter, who personally knew Sarah’s family.
Sarah’s parcel would later become part of the famed Cushing-Drumright Oil Field.
Many new wells were also productive and in October 1913, when Sarah was only 12-year-old, she received royalties of US$11 567 (over US$284 000 in today’s money).
The news of Sarah’s wealth quickly spread worldwide and she received numerous requests for loans, money gifts and, as we mentioned above, she even received marriage proposals from four Germans.
In the years that followed, Sarah made the headlines in the newspapers throughout the US, and the Oklahoma Legislature declared her to be a white person due to her wealth.
By the time she turned 18, Sarah was already a millionaire and together with her family, she moved to Kansas City, Missouri, where she purchased a house on 12th Street.
The house is still there and it is known as the Rector House. She got married in Kansas and had three sons, Kenneth, Jr., Leonard and Clarence.
Sarah knew how to enjoy her wealth and she loved spending money on clothes and cars. It would appear that she was a bit of an adrenaline junky as she was often ticketed by the police of the city for speeding.
Sarah died at the age of 65 on July 22 1967.
She was buried in Taft Cemetery, Oklahoma. — Source: thevintagenews.com