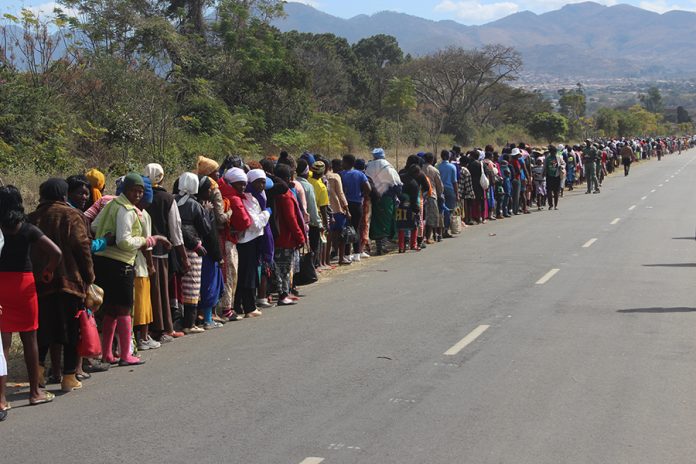 ZANU PF has faced a plethora of challenges which almost brought it to its knees.
Yet history has shown that people pushed to the bottom of the pit can rise to chart an upward course to recovery again.
On Friday last week, a new chapter was opened to navigate the future in a different manner.
The hymn has always been that of ‘peace begins with me, peace begins with you, and peace begins with all of us.’
For most, it is very easy to say yet so difficult to walk the talk.
But not for President Emmerson Mnangagwa who embraces all, even those who sought to destroy him.
For the President, it is imperative to reacquaint the nation with what unites us, more than what divides us.
The era of hate speech is being replaced by that of unity, peace and stability that will guard the sustainability of the current recovery path.
In Mutare, last Friday, a hatchet was buried with the G40 faction that almost destroyed the Party.
“Let’s bury the hatchet,” said President Mnangagwa, addressing a sea of people who thronged the Mutare Aerodrome open space.
Said President Mnangagwa:
“ZANU PF accepts everyone. I sat down with the Party leadership and we discussed issues on where we have come from. The culture of saying bad things about each other is in the past. We want to move forward as one. ZANU PF does not fit in one man’s pocket or one woman’s handbag, but we can all fit in ZANU PF.”
The Eastern Highlands landscape was painted white as thousands of Party supporters braced the chilly weather donning the Party regalia.
Queues snaked as far as four kilometres from Mutare Teachers College to the aerodrome as people impatiently waited their turn to the open space.
This was the damascene moment for the opposition parties as they saw a sea of people flocking to the open space.
Not only is the Party embracing its enemies, President Mnangagwa is embracing the whole world, as the captain of the ship.
Zimbabwe is clear on the direction to take.
President Mnangagwa has managed to restore the country’s dignity through his re-engagement efforts to normalise relations with all nations.
Said President Mnangagwa:
“The past 20 years Zimbabwe was isolated because sanctions were imposed on this country.The Commonwealth did not want us to go ahead with land reform but as ZANU PF, we chose to go ahead with it so that our people can get their land. That programme is behind us, we have our land.”
Inroads have also been made on the political front as democratic space has been expanded for all.
The number of invitations to foreign observers to our July 30 harmonised elections is unprecedented.
The number of presidential contestants is unprecedented, and so is the peaceful environment with just three days before the big day.
All the candidates in the presidential race are new; all 23 of them.
Said President Mnangagwa:
“We brought democracy to the Party. We brought democratic space in the country. We now have 133 political parties in the country but ZANU PF is everywhere and it has one message of unity. In the forthcoming elections, 55 political parties are contesting and 23 have presidential candidates.”
President Mnangagwa has been consistent since the day of his inauguration last November, that he wants a peaceful, credible, transparent, free and fair election.
He has tried to be very accommodating to his political rivals.
Despite these inroads, there is always that one crybaby who cares more about his bruised ego than the peace and harmony obtaining in the country now.
He wants to usurp the functions of the Zimbabwe Electoral Commission (ZEC).
“There is MDC Alliance led by (Neslon) Chamisa and MDC-T led by (Thokozani) Khupe but Alliance is the only party complaining. ZEC was not formed by ZANU PF. ZEC is constituted by Parliament. Chamisa was the chairperson of the committee that appointed ZEC. ZEC does not take orders from anyone. ZEC is an independent commission. No political party should give instructions to ZEC. We expect ZEC to follow the law and comply with the Electoral Act which governs its operations,” said President Mnangagwa.
Surprisingly, all the senior lawyers in the MDC Alliance hierarchy have been making irritating and vexatious demands around the voters’ roll, ballot paper, including quality, printing, transportation, storage and safekeeping.
President Mnangagwa castigated all elements who seek to reverse the gains made so far.
Corruption will no longer be tolerated and those fingered in corrupt activities will face justice.
As the new dispensation’s anti-corruption dragnet spreads, former Minister of Energy and Power Development Dr Samuel Undenge was on the same day sentenced to four years in prison after he was found guilty of criminal abuse of office.
He will serve an effective two and half years after he handpicked a public relations company for the Zimbabwe Power Company (ZPC) without going to tender.
ZPC went on to pay US$12 000 to Fruitful Communications, owned by Psychology Maziwisa and Oscar Pambuka.
His sentencing marked the first high-profile conviction since the coming in of the new dispensation.
The message was clear, President Mnangagwa does not tolerate corruption.
Said President Mnangagwa
“Corruption disturbs the country’s growth. It needs to be addressed. Zimbabwe is now mature. In addition, the Land Commission is going around the country to regularise the land distribution. Those with many farms will be left with one and those with big farms we will downsize them.”