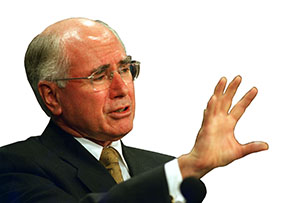 IN May 2007, John Howard, the then Australian Prime Minister ordered the Australian national cricket team not to visit Zimbabwe in a tour scheduled for September of that year.
The order came at the height of simmering diplomatic relations between Zimbabwe and the West.
The Australian government cited President Robert Mugabe as the reason why the team would not visit the Southern African nation.
Doing so would boost Mugabe’s regime, they argued.
Such was Australia’s desperation to please Britain, itself a key player in the anti-Zimbabwe project that Howard said they were prepared to pay the US$2 million fine to the International Cricket Council (ICC) for cancelling the tour.
“We don’t do this lightly, but we are convinced that for the tour to go ahead, there will be an enormous propaganda boost to the Mugabe regime,” Howard said.
“The Mugabe regime is behaving like the Gestapo towards its political opponents.
“The living standards in the country are probably the lowest of any in the world, you have an absolutely unbelievable rate of inflation.
“I have no doubt that if this tour goes ahead, it will be an enormous boost to this grubby dictator.”
And seven years later, Australia are visiting Zimbabwe and President Mugabe is still in charge.
Australia will be coming to Zimbabwe this August.
Australia last toured Zimbabwe in 2004 when they played three one-day internationals.
The visit by Australia is indeed a surprise.
It is a surprise as Mugabe’s stance, since then, has not changed one iota.
The Mugabe Zimbabwe had seven years ago is exactly the Mugabe Zimbabwe has today.
Of the many messages that the visit is sending, the clearest one is that Morgan Tsvangirai now belongs to the political dustbins.
When the tour was cancelled, Tsvangirai was the darling of the West that believed their project, the MDC, would remove President Mugabe from power.
If concerns by Australia were genuine, then they would now not be coming.
They are only coming because their weapon of choice against Mugabe, Tsvangirai is not just blunt, but broken.
The Australians would like to make the world believe that things have changed for ‘better’ in the country.
Regime change in the country spearheaded by Tsvangirai has failed dismally.
President Mugabe and ZANU PF are still in power so one hopes that it has begun to sink into Western countries that Zimbabwean affairs are dealt with by Zimbabweans.
The West stands to lose by not engaging Zimbabwe, period.
Zimbabwe did not suffer any major losses when Australia cancelled its tour to the country.
The Look East Policy intensified as Europe and her allies chose not to deal with Zimbabwe.
During that period the country partnered countries such as China and Russia in mining operations especially exploitation of diamonds.
And Australia would be foolhardy to continue ‘snubbing’ Zimbabwe; it stands to lose more than we do.
It is an open secret that the West is facing a resource crisis.
Australia is not doing the country any favours by visiting.
Nothing has changed, just that Tsvangirai was exposed for the charlatan that he is and that he will not rule as the people have no faith in him.
Truth is that Australia is visiting because the West is adopting a new strategy in dealing with Zimbabwe.
Truth is that the Aussies are visiting because the country has nothing but good to offer.
The Kangaroos will be leaping to the sunny Zimbabwe for it is a beautiful and hospitable nation where they will have fun.
It must be known that Zimbabwe and Australia enjoyed a mutual relationship; the two countries are former British colonies.
Australian Prime Minister Malcolm Fraser was instrumental in convincing the then British Prime Minister Margaret Thatcher to withhold British recognition of the Smith-led government of Zimbabwe-Rhodesia.
Meanwhile, South Africa will tour Zimbabwe and are expected to arrive on August 5 for a month-long tour that will end with a tri-angular one-day international series including Australia.
The Proteas’ tour will start with a Test match at Harare Sports Club on August 9 before action shifts to Bulawayo in the three ODI matches on 17, 19 and 21.
The tri-angular series will start on August 25 between hosts and Australia at Harare Sports Club.
The last time Zimbabwe won against Australia was in an ICC World Cup T20 match at Newlands in South Africa on September 12, 2007.
Zimbabwe won by five wickets.