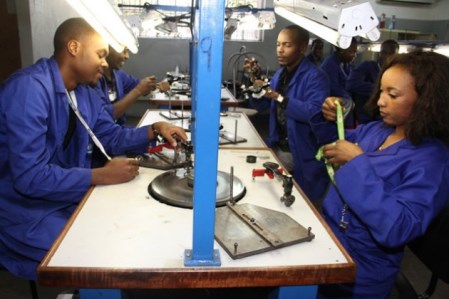 THE Government has reviewed downwards licence fees levied on diamond cutters and polishers from US$100 000 annually to US$20 000 for a period of 10 years as a way of creating an enabling operating environment for players within the processing value chain of diamonds, a Cabinet Minister has said.
Briefing the media this week on mineral beneficiation conference scheduled for Victoria Falls next week, Minister of Mines and Mining Development, Walter Chidhakwa said the move would encourage more players to venture into beneficiation of the country’s gems.
“Diamond cutters and polishers and those in the jewellery industry came here, we had fruitful debate and we agreed to address some of the issues that they raised, chief among them being to reduce the licence tariffs,” said Minister Chidhakwa.
“We have addressed the issue that has been inhibiting beneficiation in the diamond industry.
“This will pave way for those in the cutting and polishing sector to start their operations and ensure beneficiation of the diamond industry.”
As a result of the high fees, the diamond cutting and polishing industry has collapsed with more than 70 firms in the industry closing shop over the past few years, a development that goes against Government’s policy to support value addition in the mining sector.
In 2011, licence fees for diamond cutting and polishing were pegged at US$20 000 per annum with at least 29 companies licensed, but some were, however, cancelled the same year following allegations of misconduct.
In 2012, the fees significantly rose by 400 percent to US$100 000 per annum resulting in a sharp decline in licensed operators from 29 to nine while in 2013 the number dropped to just one.
Minister Chidhakwa noted that value addition to natural resources is the fastest way to trigger the economy so that revenue realised in value-added products can benefit other critical service sectors.
As part of enhancing beneficiation and value addition, Minister Chidhakwa said there are plans to set up a Zimbabwe diamond exchange by July this year.
“We will be selling our diamonds on the Shanghai Diamond Exchange, the Dubai Diamond Exchange as well as the Botswana Diamond Exchange,” he said.
“This will also be good as we prepare to establish our own Zimbabwe Diamond Exchange.
“Discussions to establish the Zimbabwe Diamond Exchange had already begun and we hope to establish it by July this year.”
Minister Chidhakwa said setting up a domestic diamond exchange would not only bring infrastructure development, but create employment and raise the country’s profile in diamond producing and manufacturing.
Zimbabwe conducted its first ever diamond auction in Antwerp, Belgium in December last year after the European Union (EU) lifted sanctions on the Zimbabwe Mining Development Corporation (ZMDC) in September last year.
About 300 000 carats of diamonds were sold, generating US$10,7 million of which US$1,6 million was collected by the treasury as mining royalties.
The second sale of Zimbabwe diamonds in Europe is closing today at the world’s diamond trading hub of Antwerp.
The diamonds have been under the hammer from February 12.
Minister Chidhakwa also urged the private sector, Government officials, regional and international research experts to attend the two-day mining beneficiation conference.
The conference, he said, will provide an opportunity to articulate how the country can unlock opportunity in the mining sector and maximise the sector’s contribution to the socio-economic development of the country through value adding and beneficiation.
The mining beneficiation conference slated for February 27-28 will run under the theme, ‘Beneficiation: Maximising value from the mining sector in Zimbabwe’.
Minister Chidhakwa said the conference will establish the roadmap for the implementation of Zim-ASSET, promote a regional hub of mineral beneficiation and optimisation of the mining taxation regime.