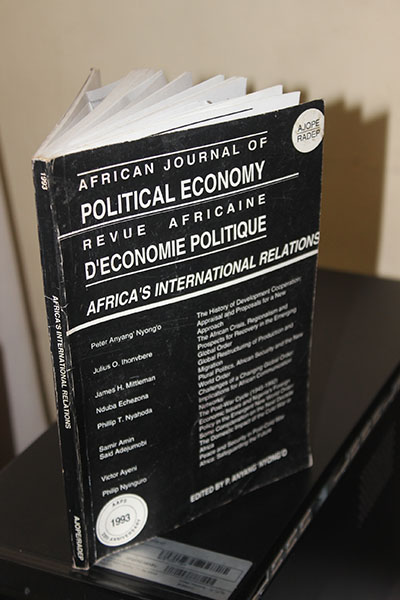 FOLLOWING the Berlin Conference of 1884 to 1885 which regulated colonisation and trade in Africa during the New Imperialism period, the partitioning of Africa began.
It was the time Europeans imposed themselves as chief architects of Africa’s affairs.
Africa became divided.
That marked the beginning of the looting of Africa’s resources by Europeans.
Years that followed were characterised by uprisings and armed struggles as Africans sought to regain their lost heritage.
Independence came, much to the delight of Africans. On the other hand, Europeans were not too pleased.
Their golden goose had been snatched away.
Strategies were put in place by Europeans so they could continue milking Africa.
Today, the West still sees itself as the world’s ‘big brother’ and will do anything to dictate events in Africa.
The journal titled African Journal of Political Economy: Africa’s International Relations, edited by P Anyang’ Nyong’o, carries papers interrogating issues of how Africa can utilise its position in the world and leverage its resources for its development.
Part of the foreword reads: “(The journal is) a critique of development co-operation as it is practised today with respect to Africa; the African crisis itself as it expresses itself in both the economic and political spheres; issues of peace and security; the implications of the changing global order.”
In a paper titled, ‘Plural Politics, African Security and the New Order’, Nduba Echezona advocates Africa to stand its ground against world ‘bullies.’
“Africans must resolve that they cannot continue to be treated as pawns in the chess board game of world politics by whichever group of powers emerges ascendant in the hierarchy of the global power equation,” writes Echezona.
“This can be achieved by the development of an African consciousness. African ideas would then be able to meet global ideas half way.”
The West has continually taken advantage of Africa through peddling lies about her well-being, in the process demoralising her people.
Terms such as ‘developing world’ and ‘Dark Continent’ have been coined in an effort to cast doubt on the continent’s potential.
The media has been used to drive this agenda. All this has resulted in Africans not being aware of their full potential.
“With the growth of mass communication techniques, the interdependence of global communities to ideas from different national societies have become a norm,” writes Echezona.
“However, if one sector of the global community is solely the receptor of ideas from elsewhere and does not generate its own ideas, it might become a source and does not generate its own ideas, it might become a source of colonisation and re-colonisation.”
In a paper titled, ‘Peace and Security in Post-Cold War Africa: Safeguarding the Future’ Phillip Nyinguro highlights the need for peace to promote economic development.
“It has been observed above that economic development is one of the everlasting guarantees of peace and security,” writes Nyinguro.
“It is through development that conditions which perpetuate insecurity are minimised.
“Thus, there is a direct relationship between a lack of development and insecurity.
“When African states became independent, the colonial powers withdrew, but only formally; they continued to perpetuate insecurity and threaten peace on the continent both overtly and covertly.”
It is this peace in Africa, whites have continued to disturb in-order for them to continue siphoning the continent’s resources.
Europe has played a leading role in instigating violence in Third World countries.
Following the implementation of the regime change agenda in Zimbabwe, numerous demonstrations and riots have been staged by Western-sponsored entities.
In Somalia, civil strife has been ongoing for decades with political analysts contending the West maintains instability in Somalia in order for them to control Somali ports which are central to the world.
A fighting group, Al Shabaab, has been arguing that Somalis must control their resources which the West is looting with reckless abandon.
In a paper titled, ‘The African Crisis, Regionalism and Prospects for Recovery in the Emerging Global Order’, Julius Ihonvebere calls on Africans to find their place in the world despite being overlooked by the so called super powers.
“Africa and Africans are in very deep trouble. In current debates and policy meetings, Africa is hardly mentioned or included in any serious discussion of the so-called new world order,” argues Ihonvebere.