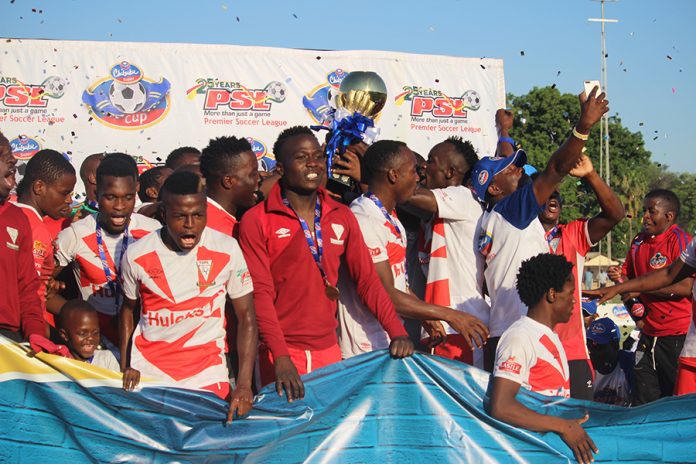 THERE is something about well-funded football teams that seems to have a negating effect on coaches.
Talk of the turnover of coaches at Spanish giants Real Madrid, English premiership powerhouse Chelsea FC or Triangle United FC, then you get a picture of this sad scenario.
Triangle is a formidable side by any measure.
They have a solid structure backing the team.
On any day, they can dismantle their opponents with relative ease.
Yet silverware is all that is lacking.
Renowned coaches Kelvin Kaindu, David ‘Yogi’ Mandigora, Biggie Zuze and Taku Shariwa have all come and coached Triangle FC in the Lowveld but until last Saturday, their trophy cabinet has been woefully empty.
The quartet tried their luck at the ‘Sugar Sugar Boys’, as Triangle are affectionately known in soccer circles, but failed to make an impact.
Zambian gaffer Kaindu, who took charge of Highlanders and How Mine, failed to make Triangle a formidable side despite a season of promise in 2015.
The team later ran out of steam as the season progressed.
Kaindu had been appointed technical director towards the end of the 2014 season before taking over as head coach the following year.
After the departure of the Zambian, former Dynamos coach Mandigora joined into the fray for the 2016 soccer season.
He only lasted a season after failing to prove his mettle.
The club did not renew his one-year contract.
Then came the former Harare City coach, Taurai Mangwiro, at the beginning of the 2017 season at the Lowveld side.
His impact was felt in his maiden season after making it in the top four.
This season has been a great one for the sugar manufacturers as they have bagged the Chibuku Super Cup and are poised for a top four finish again if they beat Nichrut or Chicken Inn in the remaining fixtures.
“What we have is a united team of players, officials, the sponsors and the community at large, pulling in one direction and that is very key. Sometimes we do not get the best of results but the people have kept on rallying behind the team and it is what has taken us this far,” said an elated Mangwiro last Saturday at Gibbo Stadium.
Mangwiro made history as the first coach to win the Chibuku Super Cup twice since its return in 2014.
He won it at Harare City.
By winning the Chibuku Super Cup, Triangle will make a maiden appearance in the continental clubs competition, the Confederation Cup, next year.
It will be a big achievement for the sugar cane growing town to host teams from Africa.
Since their formation in 1972, this year becomes an epitome of achievements in the top flight they joined six years ago. It might be a year when they have more than one player on the soccer stars calendar in Nhamo Lameck and Phineas Bhamusi.
The duo has been instrumental in the team’s performance this year.
In an interview with Patriot Sport last year in November after the soccer stars selection, Lameck bemoaned their geographical location as impeding on their visibility from key stakeholders in the selection panel.
“I was expecting to be on the calendar also but what they have done is a reflection of what they saw. I think our home is far from journalists and if you see, at Dynamos, they play in Harare where there are many journalists who see them (sic),” said the Triangle forward.
The forward put up a good show during the match though he was unlucky not to score.
Captain Ralph Kawondera headed home a Russell Madamombe cross to put his side ahead in the 58th minute.
Then man-of-the-match, Bhamusi, got the decisive goal in the 89th minute to seal the sweetness for the Sugar Sugar Boys.
Harare City had pushed all men forward, searching for an equaliser, before they were caught on the break by speedy merchant Bhamusi.
The former CAPS United winger outpaced Raymond Uchena to cut a low cross into the box, but that was blocked by Uchena.
Bhamusi got a second bite of the cherry and slotted it home from inside the box, denying Harare City their third Chibuku Super Cup.
Triangle looked hungrier for goals than the visitors who had to sleep in Masvingo after failing to secure accommodation in the small town of Chiredzi.
The ‘Sugar Sugar Boys’ dominated throughout the first half though it was an end-to-end game.
It was one of the best matches of the season, especially in the second half.
There was a good exhibition of talent that kept the packed stadium on its feet.
Fans did not disappoint as they came in their numbers to rally behind their team and boys from their community.
Lameck is one of their own, who grew up in the town.
For winning the Chibuku Super Cup, Triangle pocketed US$75 000 while Harare City earned US$50 000 for their efforts.
FC Platinum won the inaugural Chibuku Super Cup in 2014, beating Harare City at Mandava while Harare City won it the following year.
Ngezi Platinum Stars then won it in 2016 before Harare City retained it in 2017.
Mangwiro believes they will put up a good show in the Confederation Cup as they have ample time to prepare.
It will be his third time to guide a team in the African safari.
He was in the African safari with Monomotapa and Harare City before.