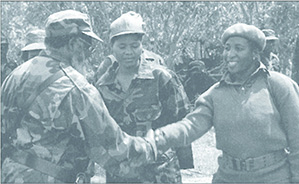 AT the Berlin Conference in 1884 Africa was divided between various European nations.
Namibia became a German colony the same year in 1884 under the rule of Otto von Bismarck.
As Heinrich Wilkes, a German historian has noted, the colonisation of Namibia was done, “by means of purchase and /or theft.
“The Germans gradually gained control of the central and southern parts of the territory that is now Namibia.”
They controlled an area called Angra Pequena in 1884.
This was one of the first incidents of the early scramble for Africa.
Over the next 100 years the people of Namibia were to suffer some of the cruelest experiences of modern colonial history, first at the hands of the Germans and subsequently under the rule of South Africa.
Around 1896, there were about 2 000 Germans working as traders and farmers in the region.
In 1897, rinderpest or cattle plague attacked the livestock.
The Herero were forced to sell their cattle to the Germans who had already started to arrive in numbers.
A conflict started as the Herero’s land was also taken away by force.
In 1904 the Herero and Nama people launched a rebellion against German colonial rule and fought hard to reclaim their land.
Around 150 Germans were killed in the Herero uprising.
To fight the resistance, Germany sent Lieutenant-General Lothar von Trotha to be the Supreme Commander of South-West Africa.
He arrived with 14 000 reinforcement troops.
Although the fighting had almost stopped and the Herero and Nama people were ready to start negotiations, von Troth was determined to prove his power by killing the African people.
Upon arrival in Namibia, General Lothar von Trotha ordered the soldiers to wipe out the entire tribe.
Today, such an act of massacre is recognised as the 20th century’s first genocide.
On October 2 1904, Trotha gave a speech in which he said, “Within the German boundaries, every Herero, whether found armed or unarmed, with or without cattle, will be shot.
“I shall not accept women and children.
“I shall order shots to be fired at them.
“I believe that the nation as such should be annihilated, or, if this was not possible by tactical measures, should be expelled from the country.”
After the Battle of Waterberg in August 1904, the killing of survivors began and others were driven into the Kalahari Desert.
Von Trotha then built a 200-mile fence to seal off the desert and leave the Herero and Nama to die of thirst and starvation.
Some of the Herero were rounded up in prison camps and among them were members of the Nama tribe.
They died from malnutrition and severe weather conditions.
Many others were beheaded and after their deaths, their skulls were taken to Germany for so-called ‘scientific’ experiments.
In a book titled Worse than War, written by Daniel Goldhagen, Jan Kubas, who accompanied the German soldiers, wrote: “They killed thousands and thousands of women and children along the roadsides.
“They bayoneted them and hit them to death with the butt ends of their guns. They were lying exhausted and harmless along the roads, and as the soldiers passed, they simply slaughtered them in cold blood.”
When news of the massacres reached Germany there was a national outcry, but Kaiser Wilhelm I refused to withdraw the extermination order.
Out of the 80 000 Hereros who lived in Namibia when the uprising began, only 15 000 were left.
According to the Namibian Government Ministry of Information, German attitudes at the time, “foreshadow those used by the Nazis to justify their ambitions for territorial expansion and the Holocaust, such as the crusade for so-called ‘Lebensraum’ — or living space.”
In 1915, after being defeated by the troops of the Union of South Africa, Germany surrendered.
Then Namibia was occupied by British-South African troops and in 1920 the area was put under South African administration by the League of Nations.
The Namibians were then subjected to years of apartheid similar to that which black South Africans endured.
Namibia potentially became a fifth province of South Africa.
Then many Germans started to leave Namibia, but few remained.
After a long struggle for independence, there were elections in 1989 and South West African People’s Organisation (SWAPO) won 57 percent of the vote.
The party’s leader, Sam Nujoma, became the president of Namibia in 1991.
He pursued a policy of reconciliation with the white settlers.
In 2011, skulls of Herero people that had been taken back to Germany after the genocide for medical research were returned to Namibia.
Three years ago the German Foreign Minister Frank-Walter Steinmeier, stated that, “the war of destruction in Namibia from 1904 to 1908 was a war crime and genocide.”
Since Steinmeier was an opposition leader at the time, nobody in Parliament wanted to hear the motion so it was not passed.
Finally, in July 2015, Germany recognised that genocide was committed in colonial Namibia.
Parliament speaker Norbert Lammert wrote in an article for German newspaper Die Zeit and noted that the massacre of the Herero when measured by today’s standards of international law was an act of genocide.
Today, Namibia is the only African country that has a daily German newspaper and those who remained have maintained the German language and culture.
This physical and cultural presence is a symbol of a historical past showing that Germans wanted to make Namibia their country, but in the end, they failed.