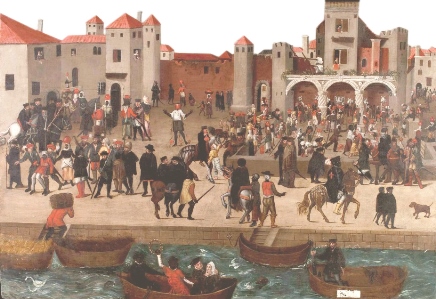 THE Moors were the founders of the first universities in Europe and the rest of the world.
The first European university was founded in Spain around the 13th century CE. However, there had already been institutions of higher learning which had been set up in Damascus (Syria) and Babylon (Iraq) before the Moors established themselves in Europe in 711 CE.
There were also universities in Egypt and Mali (Timbuktu).
The Moors reintroduced subjects like poetry and scripture to Europe because the Europeans had long outlawed the Bible and burned down books with precious knowledge.
For example, the Greeks around 400 BCE already knew of institutions of higher learning in Egypt, but after they took over the known world, they translated all the books they found there into Greek and destroyed the original scripts.
They also renamed the great library of Egypt, ‘Alexandria’.
The objective of these barbaric acts particularly the destruction of the original text to retain the Greek translation was part of a grand strategy to steal African intellectual property.
This is how the Europeans were able to perpetuate the lie that civilisation started in Europe.
The institutions of higher learning in ancient Egypt were degraded when the Greeks took over.
They did not see value even in basic education.
During the period of white domination, education had become a luxury that only the wealthy among both the blacks and whites could access.
When the Moors took over parts of Europe, education became a cultural attribute. The Moors established institutions of learning which were not only for the rich, but also benefitted the common people.
The Moors became the dominant power in Europe for almost 800 years, but their dominance started to wane.
Their decline was due to internal differences and wars among themselves.
In the beginning, the Moors were an unstoppable force because they were united in their cause.
However, when in power, there were several issues that led the Moors to fight against each other.
Miscegenation was a controversial issue which was a major source of disputes because some Moors, particularly the ones from Sub-Saharan Africa, could not tolerate that practice.
On the other hand, the Moors from Central Asia and North Africa regularly had children with their white slaves and concubines.
There was also the issue of how many wives a man could marry.
According to Prophet Muhammad, Muslims could marry up to four wives if they were able take care of them.
The other condition was that the wives had to be Muslims.
In Europe, some Moors had as many as 20 wives and as many concubines who did not necessarily have to be Muslims.
It was these conflicts which led to the internal divisions that led to the subsequent demise of the Moors.
The biggest beneficiaries of the Moorish civilisation were Spain and Portugal because these were the nations at the southern tip of Europe.
These were the Moorish strongholds and from there, the Moors would enter other parts of Europe.
The Moors also held a large part of southern France.
The white inhabitants of Portugal and Spain had access to Moorish schools.
All the universities that were built in Europe at that time had curricula and literature that were based on Moorish school of thought.
The Moors taught and wrote about navigation, mathematics and astronomy.
The fields enabled the Moors to travel around the world with great accuracy of direction.
The Moors possessed compasses and also had boat making materials which made their ships strong yet flexible.
These included hard wood, hemp rope and hemp sails from Africa.
The Italians would go to Spain and Portugal for their higher education.
The white students of the black Moors would acquire precious knowledge which they eventually used to exploit the known world after the fall of the Moors in 1492. It is not surprising that the first white nation to emerge as an enlightened people was Portugal.
Because of Portugal’s proximity to Africa, Moorish influence was strongest in that part of Europe.
Spain too.
When Columbus sailed to America, it was these two nations which aided him along with the Roman Catholic Church in Italy.
The Jews had no nation as yet and their Sephardic branch could be found among the nations of southern Europe.
Christopher Columbus was a Sephardic Jew with Italian and later Spanish nationality.
On his first trip to the Americas, Columbus was accompanied by five Jewish moranos (mixed race) who were forced to convert to Catholicism.
The lands of America were initially divided among the nations of Portugal, Spain and Italy.
The people who reside in southern America are thus known as Latinos because they are from these Latin speaking nations.
One notable Portuguese scholar who acquired Moorish education on navigation and ship travel was known as ‘Prince Henry the Navigator’.
Prince Henry was a student of the Moors and the Portuguese remember him as the man who made it possible for them to sail around the world.
Until that time, the Europeans had been around the Mediterranean Sea, afraid to venture further into the world that was unknown to them.