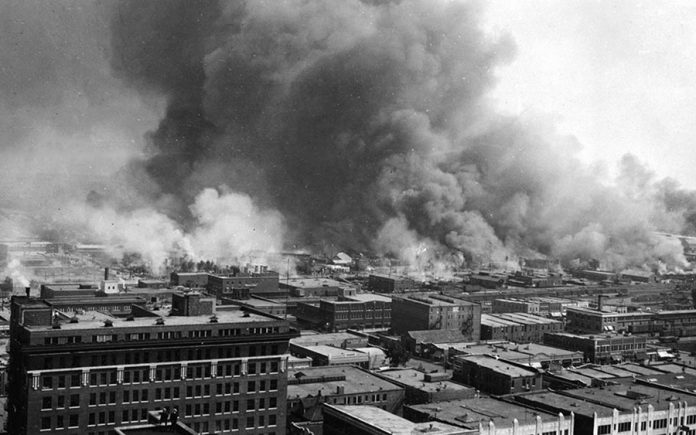 Some whites may deny it, but the work of their hands against the development of black communities speaks for themselves.

This week, we shall look at an extreme case of white envy and revolt against black progress.

There was a community named ‘Little Africa’ in Tulsa, Oklahoma, US.

It was so named because it was a collection of suburbs inhabited exclusively by blacks.

Among them was Greenwood Avenue, a business district which was dubbed Black Wall Street; the Negro Metropolis of the south-west.

Blacks, mostly of a born-free generation, were behind this booming economy.

They were their own employers and employees.

Whites, particularly southerners, were drastically less affluent since the abolition of slavery in the late 1800s.

They watched as the blacks developed their neighbourhoods and grew wealthy.

Finding employment was difficult after the so-called First World War.

Meanwhile, they witnessed blacks walking proudly in extravagant dressing and tasting the fruits of luxury.

Blacks from other states would come to places like Greenwood for employment and business opportunities.

By 1900, the era of black lynchings by whites who were bitter about the abolition of slavery had phased out.

This was until the infamous white propaganda film called Birth of a Nation which was overly derogatory towards blacks was played in cinemas across the US in 1915.

This movie called for white organisation against blacks who they depicted as a problem in the nation.

They were portrayed as diluters of American culture and corruptors of the white race.

The extremist group called Ku Klux Klan (KKK) was praised in the film.

As a result, whites began organising themselves against blacks in places like Tulsa.

They would routinely march in signature white cone-shaped hood-masks and gowns.

Blacks would watch from a distance as these white terrorists openly organised against them.

Soon after the re-emergence of the KKK, lynchings in Tulsa and other states of the US began.

Most incidences were isolated, with about two blacks being unjustly lynched a week.

The whites would set torches and crosses ablaze, burning most victims after hanging, stabbing and shooting them to death.

They would also cut off limbs to keep as souvenirs.

They cowardly hid their faces and would gang up on unsuspecting blacks for minuscule reasons which never once warranted the punishment of torture and death.

The authorities, particularly the Mayor and police force of Tulsa, did nothing to identify and apprehend the white culprits.

The police would routinely clear the roads to facilitate the smooth marching of KKK members.

It is therefore not farfetched to assume some of them and other authorities were among these masked terrorists.

On May 31 1921, a black shoeshine boy called Dick Rowland entered an elevator on his way to a hotel lavatory.

As the elevator was going up, he lost his balance and briefly held on to the white female elevator operator’s clothing to avoid falling.

Sarah Page, the operator, screamed as she had been startled, leading the black labourer to flee in fear of being accused of sexual assault.

He was pursued and arrested.

Without being charged or tried, the Tulsa Tribune daily afternoon newspaper was already accusing this blackman of rape.

At least two articles were calling for whites to organise themselves around the station for the lynching of this black man.

Whites headed for the station, armed with guns they retained from the war.

Some blacks took up arms, and though largely outnumbered, they bravely stood against the white mob trying to apprehend the wrongfully accused.

A squabble took place and an initial gunshot was fired which led both sides to open fire; what followed was mayhem.

The whites, after killing the blacks at the station, began undertaking a full fledged racial attack on any and every blackman they laid eyes on.

They walked, rode horses and drove to the black communities of Tulsa and raided every house they entered before setting it ablaze.

Nothing of value was left as the main cause of the operation was white jealousy over black wealth.

Pianos, furniture, jewellery, curtains and plush clothing, among other things, were taken out of the possession of blacks and placed in white homes.

White women, accompanied by their men, carried shopping bags and would systematically loot the houses of blacks who, by that time, would have fled to safety.

The ones found still inside were beaten and would be found scorched after the houses had been burned down.

The blacks who worked for whites in the white segregated areas along with black war veterans on the side of southerners during the civil war were not immune to this act of ‘ethnic cleansing’.

They dressed in their uniforms and war fatigues to, hopefully, be exempted from the killings, but were likewise murdered in cold blood.

Blackmen, women and children ran towards the hills as they were getting shot at from every direction.

Some women, who were bathing when the trouble began, fled with their young — naked!

Pregnant women gave birth prematurely and would flee with their bloody bodies and crying newborns.

Airplanes carrying bombs and men with rifles were deployed.

Aerial bombs were dropped against black citizens of the US by local white authorities and none came to their rescue.

The tragic fate that would befall nations like Lebanon at the hand of the US and Israel, a good 60-plus years later, befell Tulsa’s ‘Little Africa’ on this gloomy day.

By the end of the ordeal, all of what used to be ‘Little Africa’ was reduced to ashes.

More than 300 blacks were murdered and the survivors were adversely disenfranchised.

Black bodies were packed into any truck in site and speedily buried in numerous and dispersed unmarked mass graves carrying about four bodies each.

The 35 blocks that were formerly black residences carried the stench of burnt human flesh.

Afterwards, what used to be segregated land for blacks was quickly sold to whites as new land for development.

When the Tulsan blacks tried to buy back their land, they were given a condition that every building to be constructed in the area must be fire resistant.

With the disenfranchisement of blacks after this racial massacre, few, if any, blacks could afford to set up such fireproof structures.

This condition was solely set up to hinder blacks from purchasing and re-developing the area.

Insurance claims were not covered as no clause could have specified the events that took place.

The remaining prominent blacks were subtly pushed out of Tulsa by white competitors.

All that was left were ruins of what used to be a glorious black settlement.

Black Wall Street never again recovered its former glory and, to this day, no black community in the US has independently achieved such social and economic progress.

Dick, the accused blackman was never officially charged for rape.

He was set free after Sarah, the supposed victim of sexual assault, cleared the false accusations.

In today’s Tulsa, extrajudicial killings of unarmed blacks, like Terrence Clutch, by police authorities continue in like manner.

Why, then, do whites have to deny when they are accused of suppressing the social and economic development of blacks and their communities!