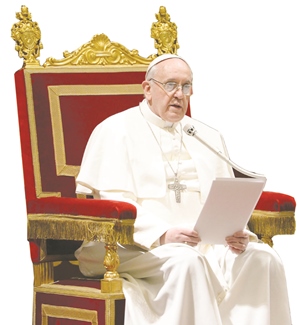 Recently at the Vatican

THE Roman Catholic Church, with about 1,2 billion followers worldwide, has its fare share of controversies.
Its headquarters is at the Vatican and on Sunday, about one million pilgrims and 24 Heads of State and Government converged at St Peter’s Square, Vatican, for the canonisation of Pope John Paul II (1920-2005) and Pope John XXIII (1881-1963).
Canonisation means declaring a deceased to be a saint and it was the first time ever for two Popes to be canonised on the same day, while Pope John Paul II became the fastest Pope to be canonised in modern history.
He died nine years ago while Pope John XXIII died 51 years ago.
“He has been canonised too quickly,” was the general feeling among other Catholics.
For one to be canonised in the Catholic Church, he must have performed at least two miracles and lived a ‘holy’ life.
Pope John Paul II is said to have healed two women, one with Parkinson’s disease and another with brain aneurysm, while Pope John XXIII has no proven miracles, but is largely praised for ‘transforming’ the Catholic Church during his tenure.
Pope Francis is said to have waived the miracles requirement hence the double canonisation on Sunday.
There were however, embarrassing scenes days before the historic event that left the Catholic Church exposed.
Groups representing people claiming to be victims of sex abuse held a candle-lit vigil at the Vatican, protesting against Pope Francis’ decision to canonise the two Popes.
They held pictures of children alleged to have been abused by priests, claiming that Pope John Paul II in particular, did not do enough to wipe out the scandal that emerged towards the end of his pontification and which has hung over the church ever since.
Despite the fact that he was popular and viewed as a conservative, Pope John Paul II is criticised for being reluctant in dealing with the sexual abuse cases during his era.
In an open letter published on the website of the survivor’s network, Survivors Network of those Abused by Priests (SNAP), many victims alleged that Pope John Paul II ignored ‘clergy sexual crimes’.
“At worst, he perpetuated and approved them,” the statement said.
“For him now to be given the highest honour in the Church rubs even more salt into the already deep and still fresh wounds of thousands of struggling victims and millions of betrayed Catholics and victims.”
Although earlier this month, Pope Francis apologised for the scandal, asking for forgiveness for the ‘evil’ damage done to the children targeted by the priests, pundits contend that the Roman Catholic Church is still at crossroads when it comes to the issue of sexual abuse and homosexuality.
On the other hand, Pope John XXIII, also known as the ‘Good Pope’ who reigned from 1958 to 1963 is largely criticised by conservatives as being ‘liberal’, having permitted reforms unpopular with some Catholics.
For example, he initiated the use of modern music, opened the way for challenges to Vatican Authority which alienated some traditionalists and ended the use of Latin at Mass.
Critics argue that he should not have been canonised because unlike Pope John Paul II, he has no proven miracles.
In Rome, a Catholic who refused to be named said Mass was always done in Latin, but Pope John XXIII in the 60s made changes to the effect that Mass be done in various languages in order to accommodate the growing number of Catholics worldwide.
“He (Pope John XXIII) was willing to compromise the Catholic Church by allowing certain things against our principles and values, so how can he be canonised?” he said.
“He concentrated on mordenising the Roman Catholic Church and in the process ignored some fundamentals.
“I think Pope Francis is bending the rules by canonising him.”
In justifying the double canonisation, Pope Francis said the two were courageous and, ‘not ashamed of the flesh of Christ’.
“Let us not forget that it is the saints who give direction and growth to the church,” Pope Francis said.
“These (Pope John Paul II and Pope John XXIII) were two men of courage, filled with the parrhesia of the Holy Spirit, and they bore witness before the Church and the world to God’s good and mercy.
“They were priests, bishops and Popes of the 20th century.
“They lived through the tragic events of that century, but they were not overwhelmed by them.”
A member of the Catholic Church from Zimbabwe who travelled to the Vatican for the ceremony said the move by Pope Francis to canonise two Popes on the same day was to unite the Catholic Church considering that the two Popes are widely seen as representing contrasting faces of the Catholic Church.
He said Pope Francis deliberately did so in order to lure people to the Church because its followers have been dwindling over the years.
“To clean up a mess you have to start from somewhere and that is what the Catholic Church through Pope Francis is trying to do,” he said.
Commenting on the double canonisation, Guillemette Chavalier from France is quoted in an online publication as saying, “It is a great joy, an immense joy, because there is happiness everywhere and this is not an empty happiness.”
If there is true happiness everywhere as Chavalier says, then the Catholic Church will continue to grow as an institution despite the string of sex abuse and financial scandals, while Pope Francis will go down in the history of the Catholic Church as a great strategist and ‘unifier’.
Catholic means ‘global’ or ‘all-embracing’ and if the gathering at St Peter’s Square on Sunday is anything to go by, then the controversy surrounding the canonisation did nothing to keep away the Catholic faithfuls.
President Robert Mugabe, a devoted Catholic himself led the Zimbabwean delegation that travelled to the Vatican on Sunday.
He was accompanied by Amai Grace Mugabe, Finance Minister, Cde Patrick Chinamasa, Permanent Secretary in the Ministry of Media, Information and Broadcast Services, George Charamba and some senior government officials.