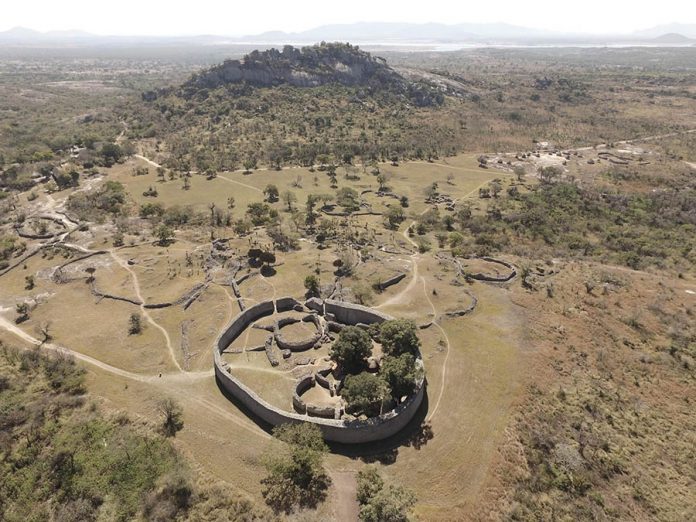 BEFORE the arrival of Europeans, the Kongo/Congo, in the west, and Great Zimbabwe, in the south-east, of the African continent offered two different trading models.

In the west, prior to the late 15th Century, there was no Trans-Atlantic trade, although there was commerce up and down the coast.

However, Great Zimbabwe, by contrast, through its management of gold production, was at the centre of an immense trade network that extended east across the Indian Ocean, though the Persian Gulf, to India and even stretched as far as China.

It was not until the 18th Century that east-west trade routes on the continent were followed through by single caravans.

Evidence shows that before that, goods and products could make their way across great distances, but only through a chain of transactions, involving many different traders.

An interesting example of this is the discovery in the Great Zimbabwe site of five double-ironed gongs.

These were manufactured in Katanga Province, southern part of modern-day Democratic Republic of the Congo (DRC).

Located, as they were, in the lower basin of the River Kongo, The BaKongo, as they were originally known, traded copper and iron for salt, food and raffia textiles.

Within a few years of the Portuguese arriving in the estuary of the River Congo, the BaKongo were trading with them.

From the beginning, slaves were an important aspect of that trade; the Portuguese also imported copper, silver, ivory and peppers.

In turn, the BaKongo people were interested in textiles, horses and crafted goods, which they wanted from the Portuguese; in particular, those crafted goods made of metal.

They also wanted to acquire skills — the skills of masons and carpenters — to build European style buildings and, in order to communicate directly with Europe, they also wished to acquire education and literacy.

The rulers of the Kongo, initially through manikongo (or king), Nzinga a Nkuwu, demonstrated a strong attraction to Christianity which the Portuguese had brought with them.

Trade between the two kingdoms became rapidly dominated by slaves.

The relationship between the two kings (of Kongo and Portugal), which had started out as one of equals, rapidly became unequal.

Portugal was importing slaves to satisfy a seemingly bottomless demand for manpower in Latin America.

This resulted in the abhorrent growth of slave trade, as happened at Great Zimbabwe.  So much so that by the end of the 16th Century, an annual average of 5 000 to 10 000 slaves were leaving Luanda for Brazil.

Increasingly Kongo’s alliance with Portugal benefitted only the Portuguese.

By the second half of the 17th Century, the Portuguese stopped launching any further military conquests, and while they continued to benefit from the slave trade, they began to lose control of the trade networks that bought and sold the slaves.

In the first half of the 19th Century, following the abolition, by the British, of the Slave Trade in West Africa, a number of Portuguese and Brazilian traders experienced their final flush of prosperity.  However, the demand for slaves from Southern Africa surged in the Americas.

This trade continued in concert with the Arab trade in slaves, until the British closed the slave market in Zanzibar in 1873.

In the 17th Century, aside from the Dutch, British and French, a host of other communities and groups tapped into the trade networks.

They began to appear on the scene both on the East and West of the African Continent.  Increasingly, these traders acted independently of both the Portuguese Crown and the main traders based in Lisbon.

Among the many independent groups were the Portuguese pombeiros, who travelled deep into western-central Africa in the 16th Century; initially acting on behalf of the Portuguese traders on the coast.

These groups also included the Yaka and Imbangala, who, although of different origins, were equally adept at making a living off other communities; ruthlessly pillaging crops and cattle, as well as slaves.

With the defeat of the Kongo in 1665, the Vili, located north of the Kongo Estuary, took on a greater commercial role, regularly travelling 800km to Kasanje, a new powerful broker state bordering on the Lunda Kingdom.

The same destination attracted the Ambaquista, a community of traders of African-European descent, who lived in the Cuanza Valley, south of Luanda.

The slave trade, under the auspices of Portugal, ruined the economic and political stability of the Kongo.

Ultimately it ruined Portugal too, as this small European kingdom let itself float in the destructive slip-stream of profit, without pausing to invest.

In the 19th Century, the cruelty of the slave trade was later echoed in Central Africa, by the regime of forced labour imposed by the Belgians in the rubber plantations they set up.

By the late 18th Century, long distance trade routes began to be established across the African continent.

In 1850, Ovimbundu traders, from the centre of modern-day Angola, had reached the Lamba of Northern Rhodesia.

In 1856, King Msiri, the Nyamwezi trader-king, established his base in Katanga, in what is the southern part of Democratic Republic of the Congo today and sent out trading caravans both to the western and eastern coasts of Africa.

In the late 15th Century, the commercial scene on the Indian Ocean coast, where the Arabs had been trading with the Swahili coastal people for centuries before the arrival of the Portuguese, was very different from the Atlantic Ocean seaboard.

Arab goods traded from the Swahili coastal people, mainly spices, went East through the Persian Gulf, India and on to the Far East.

When the Portuguese arrived in the late 15th Century, their principle aim was to capture the gold routes that drove the slave trade; but failed.

At the end of the 17th Century, having bullied the sultans of the East African coast for the previous two centuries, the Portuguese found themselves overwhelmed by the Arabs of Omani.  However, a Portuguese commercial presence was to remain on the Indian Ocean coast.

At the same time, the prazeiro, a mixed-race group, established prazos in the Zambezi Valley and set themselves up as traders in ivory and slaves. The Portuguese eventually found themselves pushed off the Zimbabwe Plateau in 1694.