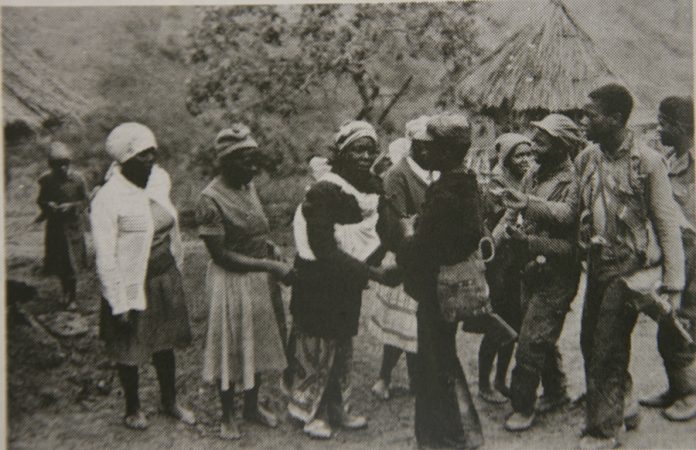 The story of Cde Timson Shiri,
aka Cde Peter Nyoni

OUR rural home is in Gokwe South District, in the Midlands Province.
It is situated on the Midlands and Matabeleland North Provinces ‘border’.
Just a few metres from our homestead, in Matabeleland North Province, was a Rhodesian Camp at Kanyandavu (BH10), Lupane District.
The camp, which operated under the cover name of ‘Tsetse Control Centre’ (TCC), was home to several Rhodesian Government officials.
All of them operated under cover of tsetse-fly control officers but were in fact members of Rhodesia’s Special Branch, intelligence officers and Criminal Investigation Department officers.
All they did, under the guise of ridding our area of the supposed tsetse-fly, was spy on our activities in an effort to thwart the efforts of the freedom fighters.
On both sides, information was critical in successful execution of the war.
These spies fed Rhodie soldiers with information about our daily activities.
I was a war collaborator.
And I am proud to state that our support was key to the success of the freedom fighters.
These spies had been sent to frustrate our activities.
It was no secret that we fed, clothed and supplied guerillas with intel.
Those of us who were unfortunate to be caught either disappeared or were imprisoned without charge.
However, we had developed an efficient network of mujibhas and chimbwidos who could not be easily detected, even by a so-called efficient spy system.
Right under their noses, we supported the guerillas.
We supplied them with food and clothing and the Rhodies were none the wiser.
However, the ‘tsetse-fly’ camp made life unnecessarily difficult.
It had to be dealt with.
Plans were set in motion to destroy the camp.
This was in 1978.
The war was at its peak and the Rhodesians were on their back-foot.
The Chimurenga spirit had tightly gripped us.
We remained committed to serving the liberation struggle.
In 1978, around May, the guerillas descended on the TCC. The sun was setting.
We were at that time rounding up the cattle for penning and we normally crossed the boundary line into Lupane District and on this day we were near the TCC.
We were herding our cattle as usual in the forest near the TCC.
We were telling each other stories and playing games.
Out of the blue, we herd gunshots and a huge explosion at the TCC.
The explosion and gunshots were followed by thick black smoke and dust.
We did not need to be told that all hell had broken loose.
A huge fire engulfed the camp.
The Rhodesians were caught napping.
It was a devastating surprise attack.
The attack had been well-researched, planned and co-ordinated, judging from its results.
The Rhodesians thought they were safe as they identified themselves as tsetse-fly controllers.
They thought the comrades believed their cover story.
The whole camp was burnt down.
The Rhodesians who tried to escape the inferno were shot dead by the comrades who had surrounded the camp.
From our vantage point, it seemed all the colonialists in the camp did not make it.
It was a total annihilation at the colonialists’ camp.
It was a sad day for the Rhodesians but a good day in the office for guerillas and the villagers who had lost their relatives as a result of the activities of these spies.
To this day, the ruins of the camp are still visible at the site.
From that day, all ‘tsetse-fly control programmes’ were suspended.
The Rhodesians never returned.
These are some of the attacks that made it clear to the Rhodies that they were fighting a losing battle.
That night, nobody in our village slept indoors, fearing revenge attacks.
We all slept in the forest; Rhodesians were known to take out their anger on innocent civillians.
We did not take chances with our lives.
A few weeks after the attack, our sabhuku, Chaoma, was abducted at night from his homestead. He was suspected to be the mastermind of the attack at the TCC.
He was never accounted for to this day.
Compiled by Tobias Manyuchi