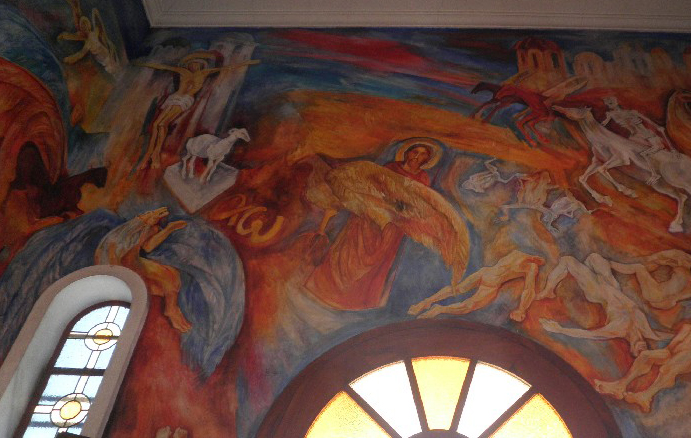 IN a singular effort, Helen Lieros advanced the old Byzantine traditions in her mural paintings in the Mozambique Greek Orthodox Cathedral which merges African and Greek imagery with Byzantine iconoclasm.

She completed the work in a period spanning 10 years.

The murals in the cathedral, 10m across and eight metres high, are a marvel to behold.

Lieros’ lucidity, technical proficiency and the easy grace of her compositions far surpass some of the clichéd and somewhat static art I have seen in European cathedrals.

There is an urgent vitality and Afrocentric edge to her work.

Her art is very different in character and overwhelmingly powerful in its syncretism.

The harmony and heroic manner that characterises her work testify to her self-assurance and a perfectionism one can only associate with a divine calling and years of experience.

Lieros’ work exudes a formidable sense of latent power, so tangible and vibrant as if one can hear and touch it.

The colour alone achieves a depth of luminous intensity and permanence that rests in the mind’s eye and memory of the viewer.

The colours of the universe, in her work, pour out of the heavens through the tormented skies with shafts of fiery light, evoking the enduring classicism of El Greco (Domenikos Theotokopoulos), of Toledo (1541-1614), noted for his elongated human forms and dramatic use of colour, influenced by icon paintings in Crete.

The artist’s frescos focus with powerful compassionate intensity on the human suffering and tragedy in the biblical verses of the Greek Orthodox Church.

In a surge of colour and a burst of energy, Lieros evokes the heroic spectacle of biblical chapters and characters which converge and swirl over the 25m-high walls – an undertaking of immense magnitude for any artist.

Lieros’ murals exude an African vitality, aligned with the grace and grandeur of hellenistic antiquity.

Her nebulously painted cerulean cosmos swirls in the background of these biblical characters from Genesis to the Apocalypse.

Biblical characters are juxtaposed with the elements of fire, earth, wind and water, bathed in a vortex of sun-drenched African skies, which alights the writing in the Bible back to life in its original primordial African setting.

At the age of 15, Lieros studied art and music; she specialised in piano compositional studies. This early grounding in classical music and art reflects in the symbolic lyricism of her mural painting.

In 1959, at the age of 18, Lieros was awarded a scholarship to study art in Geneva, Switzerland.

A second scholarship was awarded to her to study mural painting in Florence, Italy, where she specialised in Bueno Fresco – a system devised by Michelangelo di Lodovico Buonarroti Simoni (commonly known as Michelangelo), whereby one paints on dry wall plaster.

In the early 1960s, she further studied Fresco Secco in Italy; the technique she honed in later years to apply to her mural undertaking in Maputo, Mozambique.

In 1965, Lieros returned home when Ian Smith had declared UDI and sanctions were imposed on Rhodesia.

Together with her husband, she fraternised and encouraged artists from all walks of life at a time when the colour-bar was an institution and such fraternisation was illegal and frowned upon.

At Independence, she celebrated the freedom of Zimbabwe in a metaphoric painting that juxtaposed religion with politics entitled The Rise of the Jongwe.

The understated painting with an African crucifix in the background and a cockerel in the foreground alluded to Zimbabwe’s sacrifice for freedom, for which she won the President’s Award of Honour for consistent artistic excellence and outstanding dedication to the development of visual arts in Zimbabwe.

Lieros’ style relates to contemporary works due to its dramatic use of line and tone with convincingly realised multi-dimensional, sculptural, biblical figures.

The astonishing foreshortenings of biblical figures are set stark in a receding perspective that illustrates an ingenious technical manipulation of pictorial space.

Her febrile style brilliantly reflects the atmosphere of intense religious zeal and meditation.

Here, she employs an eerie, radiant sepulchral lighting which imbues her work with a dramatic urgency.

As one beholds the frescos in the Greek Cathedral in Maputo, one can almost hear the paint sing in the billowing swirls and whirls of colour and gesture.

Lieros, who has been a professional artist for 52 years, joins the ranks of great historical religious painters; taking a step closer to the giants of world art with her concrete expressions of new religious and cultural solidarities between the Greek communities in Zimbabwe, Mozambique and Athens.

She has left an indelible and venerable mark on the African soil.