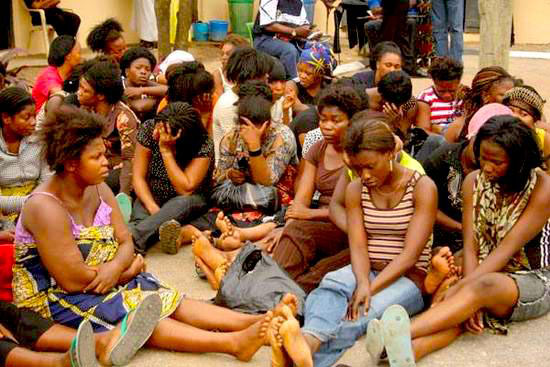 THOUSANDS of women from Africa are victims of human trafficking every year.

Whether they are willing or unwilling victims is a story for another day, but the sad truth is that human trafficking has emerged as a practice symbolising traits of modern day slavery.

Today, many African women cross the Mediterranean Sea with the hope of bettering their lives, only to face unimaginable horrors in Europe, Asia and the Middle East.

These women are exploited by employers who offer low wages while for many it is the nightmare of being forced into sex slavery.

Sadly, just like many African slaves of the Transatlantic Slave Trade who never made it back home, so do the modern day slaves — some are killed after being exploited.

The book under review this week narrates the plight of the girl-child as a victim of human trafficking.

In the book On Black Sisters Street, the writer, Chika Unigwe, narrates a sad story of the life of four girls who become victims of human trafficking and sex slavery.

Her story is about escape, disintegration, poverty, human trafficking, regret and exploitation.

The writer does well in using four women characters to tell different, but similar, stories of children of Africa who migrate to Europe only to face difficulties and struggles of surviving in a foreign land.

Despite escaping war, persecution and poverty, many face a more difficult life in Europe worse than conditions back in Africa.

Unigwe makes use of characters bound by similarities of escaping Africa to Europe in search of a better future.

The irony is that, Europe, which is supposed to be a safe haven to them, provides too harsh an environment that turns them into prostitutes or sex slaves.

For the women, love is out of question; theirs is a life of forced sexual encounters that do not even benefit or transform their lives for the better.

Women are treated as an investment for the family as shown by the character Sisi.

Girls are considered the way out of poverty; Sisi’s education is not meant to improve herself but benefit the family.

In other words, Sisi is the solution to ending her parents’ poverty:

“… she knew she could not stand another year in Lagos. Not like this .I must escape,” writes Unigwe.

After many applications to known and unknown companies without a response, Sisi meets Dele, a man who shows her treasures she could get on Zwartezustersstraat, posing naked for money.

“Every month I send gals to Europe. Antwerp. Milan. Madrid… Every month, four gals. Sometimes five or more. You be fine gal now. Abi, see your backside, kai! Who talk say na dat Jennifer Lopez get the finest nyansh? Make dem come here, come see your assets! As for those melons wey you carry for chest, omo, how you no go fin’ work?” the writer quotes Dele, a human trafficker.

“I dey get girls everywhere. Italy. Spain.I fit get you inside Belgium. Antwerp. I get plenty connections there. Plenty, plenty!”

Another of Unigwe’s characters is Ama, a victim of sexual assault, who decides to escape her home through Dele who introduces her to the black sisters in Antwerp who operate on Zwartezustersstraat.

Alek (Joyce) is another character who faces worse trauma after fleeing the horrors of civil war.

Alek loses her parents and is raped by the militia who invade their home, but upon arrival on Black Sisters’ Street, more horror awaits her in the form of sexual abuse.

Describing the new life of these women in Belgium, the writer narrates: “Ama, Joyce, and Efe — were at that very moment preparing for work, rushing in and out of the bathroom, swelling its walls with their expectations: that tonight they would do well; that the men who came would be a multitude; that they would not be too demanding. And more than that, that they would be generous.”

Sad about Unigwe’s characters is that they represent a number of African women who have disappeared in the cities of Europe, not because they want to do so but as a result of being duped by traffickers.

In On Black Sisters Street, the writer clearly shows that despite coming from different parts of Africa, their fate is the same.

“…Thrown together by a conspiracy of fate and a loud man called Dele, they are bound in a sort of unobstructive friendship, comfortable with whatever little they know of one another, asking no questions unless they are prompted to, sharing deep laughter and music in their sitting room, making light of the life that has taught them to make the most of the trump card that God has wedged in between their legs, dissecting the men who come to them,” Unigwe writes.

On Black Sisters Street gives voice to thousands of sex slaves who have been trafficked from the continent.