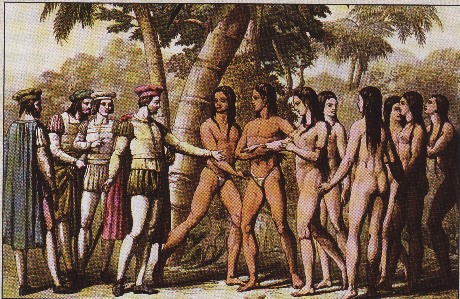 THE world has been exposed to a great historical lie about the founding and settlement of the lands now known as the Americas.
We are made to believe that Christopher Columbus found America by mistake and after that, the Europeans went to inhabit the new world that had been discovered by Columbus.
The truth is that the original inhabitants of the Americas were black people who were known as the mound/ pyramid builders because they built many mounds and pyramids which can still be found today and some of them predate the pyramids of Egypt.
Around 1000 BCE, there were groups of black people which regularly sailed to the lands of America and started some of the greatest ancient civilisations known to man.
These were the Mayan civilisations which are known to have made tremendous achievements in architecture, astrology and agriculture.
They arrived in the Americas in the 5th epoch of their time and they had a kingship which traced itself back to God.
They considered themselves a chosen people and were awaiting the day of the coming of their Lord.
It was in anticipation of this day that they had a keen interest in the stars.
The high pyramids they built were vantage points to view the stars in clarity looking for signs that would tell them exactly when their Lord would arrive.
These blacks left a book called the Popovu which tells of their story.
Their Lord was symbolised by the dragon and the man who would manifest himself as their saviour was depicted as a dragon.
They called Him Kukulcan which meant the feathered serpent (Dragon) and their lives were centred on waiting for the day of his coming which was in the distant future.
They warned their descendants to always stay mindful of that day.
The Mayans made complex calendars which would run for thousands of years and would subsequently end on the supposed day of the Lord.
After some studies, archeologists and astrologers managed to decipher the date in question and it was assessed to be the last month of 2012.
A lot of people feared the meaning of such a date which was expected so eagerly by many people.
Many were convinced it meant the end of the world and when 2012 passed without an incident, there was great relief.
The Mayans were a branch of the sons of Solomon who settled in those lands around 1000 BCE.
The Popovu, which was their book of scripture, is similar in content to the book of Enoch which was found in Saba (Yemen).
These blacks were the kings and priests of all the inhabitants of ancient America and they are depicted as giant black people with kinky hair and even dreadlocks. They also have gigantic stone carved colossal heads all over America that are called Olmec heads.
These heads are strictly African in phenotype with large flat noses, big eyes and each having seven locks of hair.
When Columbus arrived in America he found these people in power with a great civilisation and population.
They communicated with them in Hebrew.
He also found their history and religion intact and brought back the report that he ran into the people of the Queen of Sheba.
Columbus had been in search for gold and these were the possessors of the precious guanine and they were clearly in his way.
On his return to Spain, he got the instruction and aid to wipe these black people out by way of killing them.
On his first voyage, Columbus was not supported financially by Queen Isabella of Spain because at that point his plan seemed a little fuzzy.
He tried unsuccessfully to sell the idea of investing in the West as opposed to the popular East not only to Isabella of Spain but also to the King of Portugal. Eventually Columbus’ first voyage was sponsored by a man named Louie de Santiago to the tune of 17 000 dockets (5 000 Pounds).
When Columbus returned he brought the news that he had found the new world and with gold deposits, but the land was under the control of the people of the Queen of Sheba.
Because of their earlier experiences with the Moors in Southern Europe the whites resolved to exterminate the blacks in the Americas.
So the next time he came in 1495, Columbus went straight for the slaughter of those blacks and thousands of Arawak native men, women and children.
The men were beheaded and the heads were thrust on spears and left to decompose into a shell.
On this voyage Columbus managed to get away with 1 500 Arawak women.
These were black people getting killed in their land because they were in the way of great profits for Columbus and the young monarchs of Spain.
The skull and bones symbols you see on those European flags on pirate ships in movies are depictions of this slaughter.
Columbus and his men were called the conquistadors and they did more than just take the lives of the indigenous blacks.
They covered the pyramids they ran into with mud so that vegetation would grow over them in time.
They hid the Olmec heads underground and removed the serpent/ dragon symbols on many of the stone monuments.
Columbus brought the guanine gold from the Americas to Europe and upset the gold market.
Even West Africa gold was outshone by the American gold for several years after that.
Columbus named the new world ‘America’ after Amalek, the biblical ancestor of the Greeks (which makes up the root of the fake Jews).