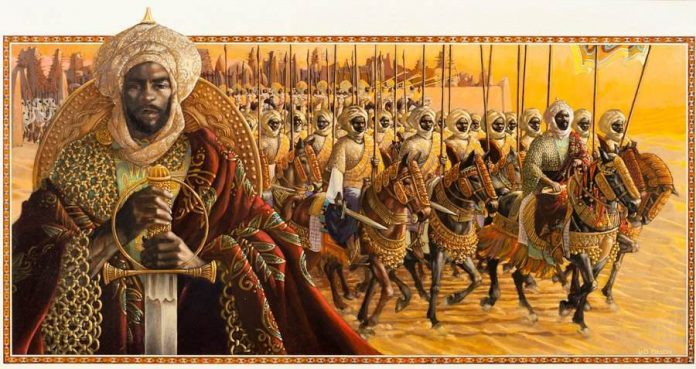 IT is generally assumed that the movement of Africans into Europe, in significantly large numbers and into positions of real power, did not occur until the Muslim invasion of Spain in 711 AD.

In AI-Makkary’s History of the Mohammedan Dynasties in Spain, however, we learn of a great drought that afflicted Spain about three thousand years ago, a catastrophe that was fol­lowed not long afterwards by an invasion from Africa.

This, of course, had nothing to do with the medieval Moors, with which this book is primarily concerned, but it is worth noting here because it actually established an ancient African dynasty in Spain, a fact that is omitted from the official histories.

The drought that devastated Spain, however, is described by a number of Spanish historians.

Pedro de Medina in Libra de las Grandezas de Espana, published in Seville in 1549, dates the drought at 1070 BC. Ibn-1-Khattib AI­Makkary (in his major historical work, translated by Pascual de Gayangos 1 ) describes it in some detail.

It is AI-Makkary, also, who informs us of how, Africans banished from North Africa by an African king against whom they revolted, entered Spain and took control of that country.

The leader of the Africans is recorded as Batrikus. What his original name was, we do not know but it survives as Batrikus in the Latin of the Romans because it was the Romans who defeated these Africans 157 years later.

These Africans first set anchor at a place on the western shore of Spain and settled at Cadiz. Advancing into the interior of the country, they spread themselves about; extended their settlements, built cities and towns and increased their numbers through marriage.

They settled in that part of the country between the place of their landing in the west, and the country of the Franks in the east, and appointed kings to rule over them and administer their affairs.

They fixed their capital at Talikah (Italica), a city now in ruins, which once belonged to the district of Isbilah, which is the modern Seville. But, after a period of 157 seven years, during which eleven kings of the African race reigned over Andalus, they were annihilated by the Romans, who invaded and conquered the country.

The second major intrusion of an African army into Spain before the Moors occurs sometime around 700 BC during the period of the 25th dynasty in Egypt, when the Ethiopian Taharka was a young general, but before he had been ceded the throne by his uncle Shabataka.

It is this same Taharka (referred to in early Spanish chronicles as Tarraco) who led a garrison into Spain and invaded it during this period.

We have a clear and indisputable reference to this in a manuscript by Florian de Ocampo Cronica General published in Medina del Campo in 1553.

The name of the invading general is given as Tarraco.

He is not only identified as head of the Ethopian army but the reference is more specific: It says he was later to become a King of Egypt.

The name, the period, the historical fact of his generalship and his later kingship of Egypt, his Ethiopian origin and the wide-ranging trade and exploration of the Ethiopian in this period, all attest to the validity of this reference.

But most persuasive of all is the fact that cartouches of the Upper Egyptian kings of this period have been found in Spain.

Evidence of such cartouches may be found in the Journal of the Epigraphic Society (Vol 7, No. 171-April 1979).

The cartouche of Shishonq, a Libyan King, was found in Tomb 16, Almunecar, Spain. The Libyans ruled with the support of Nubian armies from the 22nd to the 24th dynasties and were overthrown by the Nubians in the 25th.

The fact that Africans from the north had been intruding into southern Europe from very early times should not come as a great surprise, for the straits that separate the two continents can be crossed by the simplest boats in a matter of hours.

The proximity of the borders of Europe and Africa and the evidence of the African phenotype among many southern Europeans led Napoleon to remark that: “Africa begins at the Pyrenees.”

Many historians, however, make clear-cut distinctions between the early North Africans and the Africans of the Sahara.

They contend that the Africans who made contact and left their mark on Europe should not be confused with the sub-Saharan African type.

They see these people as Euro-Africans (another version of the ‘brown Mediterranean race’ myth used to account for the genius of ancient Egypt).

Since many North Africans in modern times seem to fit into this theoretical construct; it has worked very well to confuse and confound the definition of their ethnicity.

Some of our contributors, although well grounded in their particular areas of expertise, are vague about the origins of the North African tribes and the complex of historical factors that have transformed the cultural and physical configuration of these people.

This has compelled me to use my editorial mandate and overview to bring what I hope is a more decisive clarity to this matter.

The people whom the classical Greek and Roman authors called Berber were mainly black and affiliated with the then contemporary peoples of the East African area.

The word ‘Berber’ was used in fact to refer to peoples of the Red Sea area in Africa, as well as North Africans.

It was an ancient belief that the nomads dwelling in the deserts of Arabia were the same peoples whose ancestors had, in earlier times, roamed the deserts of East Africa.

It was such populations that largely comprised the Moorish people, called Moors (from the Greek maures, the Roman maurus for ‘dark’) because of the attribute of blackness which sharply distinguished them from the bulk of the European people.

However, the inhabitants of present-day North Africa are considered ethnically and culturally distinct from people dwelling south of the Sahara.

This is only so today because of the considerable influx of European types during the white slave trade and their later movement in positions of dominance after the defeat of the Moors.

The 700 years, during which the Moors dominated the Iberian Peninsula, was an era in which many Europeans came into North Africa in states of servitude. The Muslims brought millions of European slaves over to the North African ports of Sale, Tangier, Algiers, Tunis, Tripoli, Fez and Marrakesh and some of the northern Egyptian towns. One very famous Sultan, Mulai Ismail of Meknes, in Morocco, had as many as 25 000 Euro­pean slaves who participated in the building of his colossal stables. The Sudanese were also taken into slavery but before the 15th Century, not as many as the whites.

These Europeans began to modify, through inter-marriage, the earlier black inhabitants of North Africa.

This is what eventually made so many North Africans appear different from the sub-Saharan Africans.