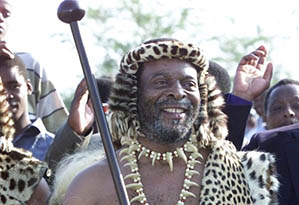 IT seems the Zulu King loves controversy.
In March this year Goodwill Zwelithini made some comments against fellow Africans, which caused xenophobic attacks in South Africa and claimed the lives of fellow Africans; something condemned by most African leaders.
He had said: “We request that all foreigners should take their baggage and be sent back.”
And this time he is in the media again for all the wrong reasons; praising apartheid and white minority rule in South Africa.
Praising apartheid, the ‘motor-mouth’ king said of the new SA: “…the economy that we are now burning down. You do not want to build on what you had inherited. You are going to find yourselves on the wrong side of history…I am surprised that all presidents who have been in the so-called democracy occupied apartheid buildings where they make all these laws that are oppressing us. But you on the ground are burning everything that you found here. You don’t want to use them (buildings), you say this is apartheid infrastructure. Your leaders are occupying buildings where apartheid laws were made to oppress you…The Afrikaners respected me. I don’t know how it happened that the Afrikaners respect me so much” (The Mercury, 7 December 2015).
I wonder how Nelson Mandela, Steve Biko, Chris Hani and the other South African heroes who fought hard to free South Africans from the boers, would be feeling if they were here today. They are probably turning in their graves.
And those children who were murdered by boers in Soweto in 1976 for demonstrating against oppressive apartheid laws; I wonder if the king remembers them at all.
However, a spokesman for the Zulu royal household, Prince Thulani, denied that King Zwelithini praised apartheid.
Talking to News24, the Prince said: “He said he was born in 1948 and he had lived through apartheid and he knew the good and the bad of the system. He said there were good and bad things that were done during apartheid and he was reflecting [on] some of those issues. The King also speaks out when there is good and bad in the democratic government because it too is not perfect. The King never spoke about the economy. He did, however, tell people that they need to stop destroying infrastructure; it doesn’t matter when it was built. That is not promoting apartheid.”
On boers respecting him, the Prince said: “He also said that they respected him because he could not be bought, he stood firm in what he believed in.”
While most South Africans (blacks) still harbour painful memories of apartheid, the King would have been one of the beneficiaries of apartheid; as the desperate boers used kings and chiefs to further their policy of separate development through the creation of Bantustans or Homelands under the Bantu Self-Government Act.
The idea was to remove black people from “white South Africa”. The kings were given self-governing powers in their quasi-independent states. In 1970, the boers enacted the  Black Homelands Citizenship Act , “which formally designated all black South Africans as citizens of the homelands, even if they lived in “white South Africa”, and cancelled their South African citizenship.”
Whatever the King said, I think he has a short memory to praise white minority rule in South Africa; in whatever context? Many people died in South Africa because of colonial injustices.
Many people are still dying in South Africa because of some of these colonial injustices, some which will take centuries to correct.
The King is now known for saying things that he will later deny, stating that he was misquoted.
In March, after inciting violence, he denied that he had said foreigners should pack their bags and go.
It’s only a matter of time before he is in the press again, uttering some nonsense, and the Prince will once more issue out another denial statement, saying the King was misquoted.
However, readers of BBC Africa, where the King’s comments were posted, were not impressed. Below are some of their comments.
Hans Ulrich (commenting on BBC Africa): “Why is this man crucified for the truth while South Africans on daily basis boast of how SA is developed, when in fact it was built by apartheid government. It’s true it’s apartheid government that made South Africa what it is.”
Yassin Chilimba (Commenting on BBC Africa): “This Zulu king is a handful; last time he was in news for fuelling xenophobia attack and he pretended to be noble and now he has something he can’t chew and some foolish say the king said nothing.”(sic)
Mesha Muwanga (Also commenting on BBC Africa): “I just pray for the day South Africans can be free and respected in their own country…not treated as second class.” (sic)