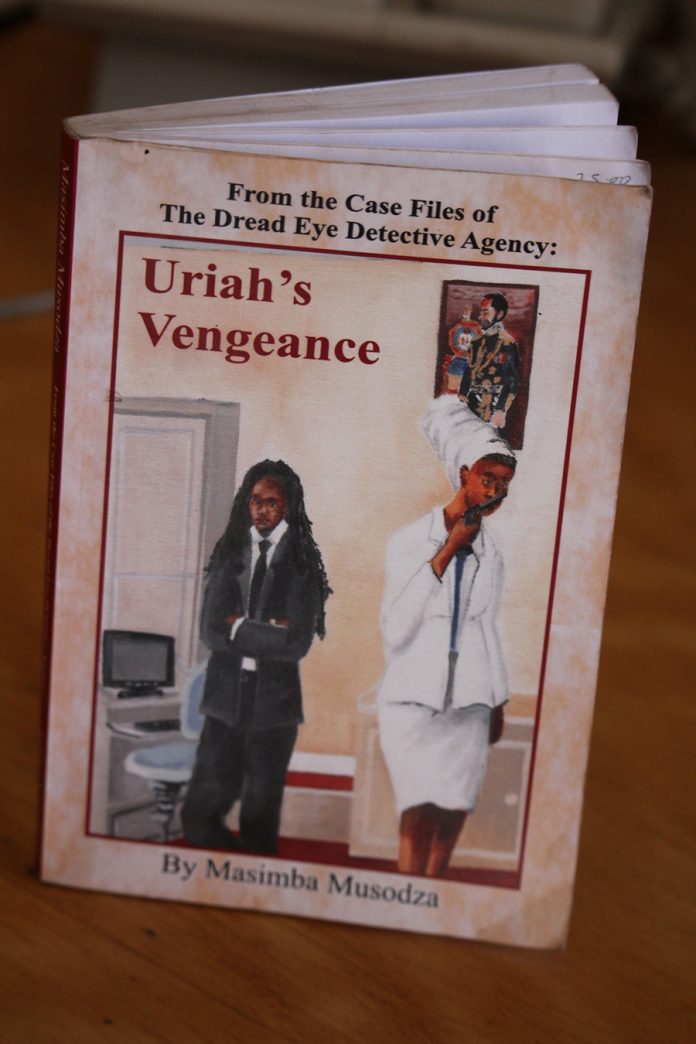 DIFFERENT stories are shared among listeners and readers through different platforms but the book remains a powerful medium for storytelling.
It is through the book that writers have found a useful platform for discussing social, economic and political issues.
Of significance is the compelling and pervasive fact that a writer draws on the liberty of telling a story from his/her own perspective.
It remains the duty of the reader to appreciate or denounce the story that has been shared, but famous writer Chinua Achebe once said:
“If you do not like someone’s story, write your own.”
Under review this week is the book titled, From the Case Files of The Dread Eye Detective Agency: Uriah’s Vengeance by a Zimbabwean author, Masimba Musodza.
Musodza presents the story of two siblings, private detectives, hired to protect a wealthy businessman from a potential extortionist.
As the story unfolds, the businessman is brutally murdered and it is through the quest to find his killer that clues obtained point to a mission for revenge that dates back to Zimbabwe’s war of independence.
Although the book’s focus is on crime fiction, the liberation struggle of Zimbabwe is also a focal point of the story.
It is portrayed in a perspective that brings out the issue of betrayal that some comrades experienced during the liberation struggle and after independence.
Musodza is pointing out that although the liberation struggle was a war of independence, some comrades did not live by the code of conduct and ethos of the war (Nzira Dzemasoja).
His writing questions the contribution of such comrades who behaved contrary to the ideals of the liberation struggle.
In Uriah’s Vengeance, much focus is on the aftermath of the war which is influenced by events that transpired during the war.
“I am the Uriah who was sent to the heat of battle so that the King could take possession of my wife,” Musodza quotes one of the characters.
The writer brings out the idea that although the main agenda for the liberation struggle was to gain independence, issues like taking each other’s girlfriends highlights betrayal of some comrades.
“As the war heated, Karize went from attempted fondling and suggestive remarks to clear declarations that he wanted my Alicia and we should capitulate to his demands or face the consequences,” writes Musodza.
Musodza subtly points out that ideals of the liberation struggle were distorted with the emergence of comrades who became rich, greedy and forgot those they shared the trenches with.
“‘Oh, yes, I am a war veteran!’ the old man said proudly. ‘But what do I have to show for it? It’s like what that Chinodya fellow said in his novel, Harvest of Thorns. The only ones who have something to show for it are the apostate politicians and the thugs now doing shameful things to the very people they liberated from Ian Smith’s boot’,” writes Musodza.
Though his story is anchored on crime fiction, Uriah’s Vengeance brings to the fore hidden truths and betrayal.
In a way, Uriah’s Vengeance is a story that questions selective independence.
“We had a country with an African name; we could now use the same toilets as the whites, but when I looked around, I saw that it was blacks who were still suffering, harassed and killed even,” Musodza writes.
The writer brings out the pain of those betrayed yet he ridicules the weaknesses within the administration of the blackman.
He questions the flawed administration in the police force and points out how it should adapt to changing times in a liberated Zimbabwe.
He points out the weaknesses of the black administration that concentrates more on making money without regard to the future.
“Economic fundis howled and gibbered in the papers ,on television and the internet; false prophets foreseeing false profits in economic waters that continued to be fouled by the political monster spawned by the incumbent , ideologically bankrupt regime and the widespread belief at home and abroad that Zimbabwe was a basket case by any standard,” writes Musodza.
Numerous issues that Musodza brings to attention ridicule those who survived the war while lauding those who concentrated on pursuing their own interests.
Uriah’s Vengeance provides both an entertaining and gloomy perspective of a writer who tries to connect the past and present by giving insights into Zimbabwe’s war of independence.