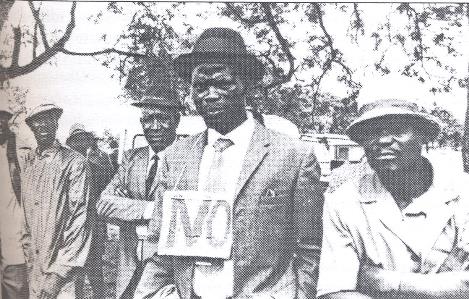 THE Pearce Commission of 1972 was an attempt by both the British and Ian Smith to legitimise Rhodesia’s Unilateral Declaration of Independence.
The commission was also responsible for the emergence of Bishop Abel Muzorewa into the politics of the day.
The nationalist leaders had been jailed and they tasked Bishop Abel Muzorewa to campaign for a ‘No’ vote.
In 1970, Rhodesia under Ian Smith became a Republic with a new ultra-right constitution that further strained the relationship between London and Salisbury. The election of the Conservative party in Britain under Edward Heath as Prime Minister in 1970 brought renewed impetus to find ‘a sensible solution’ to the Rhodesian problem.
In November 1970, Heath sent Douglas-Home to Salisbury to negotiate a political settlement to resolve the Rhodesian crisis. Home arrived in Salisbury and hammered out and signed a pact with Smith to gradually increase African representation in parliament. Because the blacks were not involved in the negotiations, the terms of the agreement had to be put to them for acceptability.
The Pearce Commission was an outreach conducted by British Judge Lord Pearce to test the acceptability of the November 24, 1971 Constitutional Settlement signed between Smith and Douglas-Home.
Once the terms were accepted, they would be incorporated into the Rhodesian constitution before the British finally granted the colony its independence. Lord Pearce came to Rhodesia and went on an outreach programme across the country to find out the views of the people regarding the settlement proposals.
The settlement proposals were:
A Rhodesian declaration guaranteeing individual rights and freedoms including access to High Court for complaints.
An independent commission to study racial discrimination and make recommendations to the Rhodesian government.
A Rhodesian promise not to evict Africans from certain white-designated areas pending a report by the Discrimination Commission.
A declaration of Rhodesian intention to progress towards ending discrimination
A $12 million annual British grant for 10 years for economic and educational development in African areas to be matched by Rhodesia with money additional to present planned expenditure.
A new African voters’ roll with lower franchise qualifications with a provision that when the number of African voters rise to six percent of the European voters, Africans will be given two more seats in Rhodesian Parliament that had 50 seats reserved for whites and eight reserved for blacks. This process of incremental addition of black seats would continue until there is parity. Then a poll for all Europeans and Africans will decide whether more seats should be created. And then majority rule for the Africans would come.
At that time, it was estimated that the population was five million Africans and 250 000 whites. Under the proposal, it would take over 60 years for parity to be reached in parliament. Therefore theoretically, African majority rule would only come after the year 2040.
In the 1970 Republican constitution one had to have an annual income of $1 800 or more for the past two years or immovable property worth $3 600 or more and four years of secondary education to qualify to vote for the 50 reserved white seats.
On the other hand, an African had to earn an annual income of $600 or have immovable property worth $1 200 or more and have completed two years of secondary education to vote for the eight reserved seats for the blacks.
In addition, there were eight seats elected by an electoral college of African tribal chiefs.
In total there were 66 seats under the constitution.
Before the arrival of the Pearce Commission, an independent body, the African National Council was formed under Bishop Muzorewa on December 16, 1971 as a temporary body to oppose the settlement terms. The jailed nationalists had advised the formation of this body to oppose the proposals.
Later, Bishop Muzorewa, basking in the popularity he had gained during the Pearce Commission, would refuse to leave politics and went on to form a political party, the United African National Council (UANC).
Lord Pearce and his team arrived in Salisbury in December 1971.
An acceptance of the constitutional settlement by especially blacks would earn Smith’s government legitimacy and independence.
Pearce and his team embarked on an outreach across Rhodesia and found out that the majority was in opposition of the proposed settlement. The outcome of the report was published on May 23, 1973. It was a deafening NO.
The British Government accepted the findings, the ‘No’vote- and announced that the existing economic sanctions would remain.
After the publication of the Pearce Commission report, the US Senate voted against the re-imposition of trade embargo on chrome coming from Rhodesia. While under sanctions, trade on the commodity continued.
Douglas-Home then declared that anything pertaining to Rhodesia had to come from Rhodesians themselves as all proposals had failed.
But the blacks had long abandoned the route of negotiations and were already fine-tuning the route of armed confrontation. Within months after the reverberating NO to the Pearce Commission, the north east of the country would explode into an armed confrontation between the Rhodesian forces and nationalist guerrillas. On December 21, 1972, the late General Solomon Mujuru and others fired the first shots of the final push of the Second Chimurenga at Altena farm in Centenary.
Next week, we shall look at other efforts by the nationalists outside the country to form a united front to fight the Rhodesians: the formation of FROLIZI.