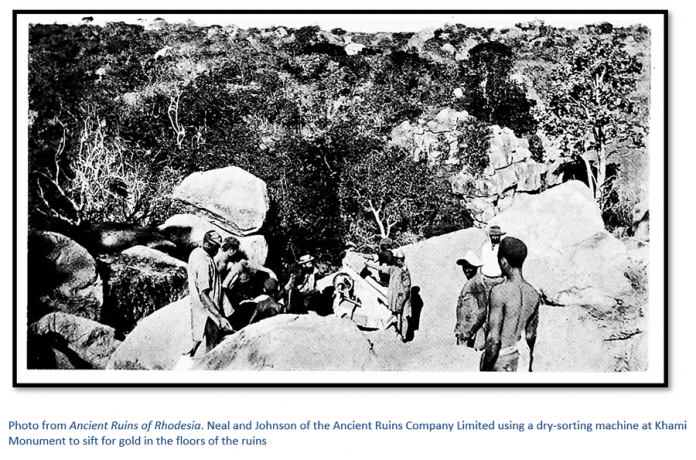 ARCHAEOLOGY was once the domain of settler-colonisers who examined excavated archeological finds, artefacts and African edifices with voyeuristic curiosity.

As a result, most former colonies are faced with the task of having to re-discover and search for their national records in overseas archival and archaeological records.

Following the colonial conquest, many European archaeologists were deployed to study the people and their habitats as well as excavate indigenous sacred sites, iron age sites and ancient mine workings.

The Pioneer Column, under Cecil John Rhodes, also included archaeologists, particularly hand-picked by him to unearth our tangible heritage buried in the ground over the millennia.

Many of the sites excavated were revered shrines for the indigenous people.

The flawed opinions, notions and assumptions of indigenous Zimbabwean people shaped their erroneous opinions of us, often attributing indigenous excellence/expertise to foreign traders, such as Persian Phoenicians and Arabs, among others, which facilitated their domination of our cultures, religions and way of life.

In 1895, a company known as Rhodesia Ancient Ruins Company Limited was formed, with exclusive rights to ‘explore and work for treasure’ at all iron age stone wall ruins between the Zambezi and Limpopo rivers, with the exception of Great Zimbabwe.

The company was established after almost 25kg of gold had been found at Danangombe (Dhlo Dhlo) and Mundie burial sites, in the hope that other ruins in the country would prove to be equally lucrative.

The company directors came to be known as ‘Blanket Prospectors’ because they travelled from village to village giving blankets to local indigenous people as rewards to reveal the whereabouts of other indigenous Iron Age sites or ancient mine workings.

As a result, licences to explore ruins were issued to other colonial prospectors and, in the process of plundering the ruins, considerable valuable evidence concerning indigenous archaeological history was destroyed.

In 1900, once the damage was brought to the attention of the British South African Company (BSAC), the Rhodesia Ancient Ruins Company Limited ceased to operate.

Later, in 1902, Neal, together with R.N. Hall, published an account of their illegal exploits in which 140 ruins were recorded.

Given that most academic references to Zimbabwean archaeology are perceived and recorded by white settlers or foreign researchers, a great deal of indigenous content has been lost in their hypotheses and assumptions.

Archaeology is the study of ancient societies by scientific analysis of material remains of man’s cultures.

Until the late 1970s, very few African scholars undertook archaeological research; it remained the domain of white settlers until post-independence in 1980, when the Department of History at the University of Zimbabwe added archaeology to their undergraduate course in 1984.

Today, Zimbabwe still remains a largely unplumbed land; its history is said to have begun here with the arrival of life, nearly 300 million years ago, when primitive algae began growing on the highveld.

Fragments of these strands of protoplasm were imprisoned as fossils in blocks of limestone, as evidenced near Turk Mine where they can still be seen.

One hundred million years later, a changing milieu favoured the development of more specialised forms of vegetable life which included some of the oldest surviving plant species in the world today.

Then, about 175 million years ago, the environment altered again and reptiles dominated the earth.

They continued to do so for the next 100 million years-or-so when dinosaurs of all shapes and sizes roamed the area which then became known as Zimbabwe.

A fossilised footprint was left by one of these creatures, in an area of sand south-west of Bulawayo; its petrified bones were recovered nearby.

This creature, compared to its larger relatives that lived near Kariba and whose bones have also been recovered, stood at approximately one-and-a-half metres high.

It’s Kariba cousin weighed up to 50 tonnes, as evidenced by the fossilised remains of these reptiles on view at the Harare Museum.

At about this time, sand blown in from the Kalahari covered most of Zimbabwe and turned the area into a seemingly irreclaimable desert.

In time, nature relented; abundant rains fell and more sophisticated forms of animal life began to appear on the veld.  Among them were man-apes that left abundant skeletal remains across the area of Limpopo.

Around 100 000 years ago, they began to fashion tools by chipping pebbles which were left behind in prodigious numbers for archaeologists to discover and classify.

Stimulated by circumstance, about 50 000 years before Christ, these primitive Stone Age men began to manufacture pear-shaped stone artifact, termed hand-axes, which were also widely dispersed throughout Zimbabwe, especially along  the lines of the old river beds which marked the ancient swamps into which these primitive men drove their game before surrounding and killing it.

The fundamental invention of the bow and arrow led to an improved technique of stone-flaking which allowed the manufacture of tiny barbs and points from quarts and other rocks, used for arming spears and arrows.

These were the culturally more developed Bushmen hunter-gatherers who have been identified with both the late Stone Age microlithic industry of Zimbabwe and the vast numbers of cave paintings that are among the foremost cultural wonders of the country.

These rock art paintings that we see today throughout the country provide us with visual testament of the country’s past and represent the creative results of a long tradition.