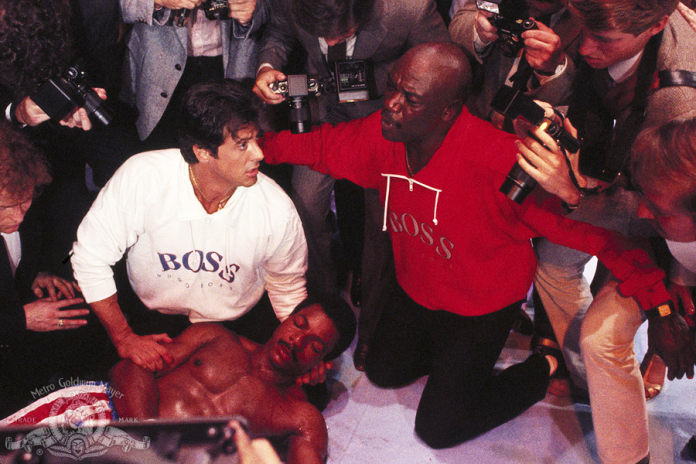 SOMETIME in July 1979, Roger Ebert walked into a movie house with Muhammed Ali and family.

They were going to watch the movie Rocky 2 and Ali was going to play critic – “Starring Apollo Creed as Muhammed Ali,” Ali had joked.

In his article Watching Rocky 2 with Muhammad Ali, The Pulitzer Prize-winning film critic Ebert would go on to explain how Ali, after watching Apollo talk in the opening scene, went on to say: “That’s me, all right. Apollo sounds like me. Insulting the opponent in the press, to get him psyched out. That’s me exactly.”

The excitement in Ali’s voice and tone, as penned down by Ebert, was unmistakable such that when he asked Ali if there was any way that the character of Rocky could have been inspired by Ali, Ali outrightly rejects the assumption saying: “No way. Rocky doesn’t act nothing like me. Apollo Creed, the way he dances, the way he jabs, the way he talks…That’s me.”

As the world would gradually learn, indeed, the fictional character of Creed was inspired by Muhammed Ali after Sylvester Stallone watched the Ali/Wepner fight in which Ali defended his heavyweight title against little known Chuck Wepner around whom the character ‘Rocky’ was built.

The fight went on for the full 15 rounds in which Wepner managed to floor Ali in the 9th round (for only the third time in Ali’s life in spite of the many fights he’d fought).

Despite putting up the fight of his life, Wepner finally gets knocked out in the 15th round and Ali retains his title.

In Rocky 1, Creed, like Ali, defeats unknown local boxer in the 15th round.

However, Rocky 2 is a different ballgame.

Rocky defeats Creed, the great heavyweight champion of the world.

Ali commented that it was a great movie and after Ebert asked what he thought of how the fight turned out — meaning how Rocky had overcome the great heavyweight champion of the world, Creed.

Ali responded by saying something so profound one would be forced to think he was taking it a bit too personal but if you asked me, I would say he was spot on – this is typical of America.

He said it would be against America’s teachings for the blackman to come out superior: “I have been so great in boxing they had to create an image like Rocky; a white image on the screen to counteract my image in the ring. America has to have its images no matter where it gets them — Jesus, Wonder Woman, Tarzan and Rocky.”

Paranoia — another would say — to which I would respond by reminding the reader that Ali practiced his trade during a defining period in America’s history in which the country was fraught with in-house rioting due to racial injustices faced across American communities by blacks.

Those were the days Cassius Marcellus Clay Jr changed his name to Muhammed Ali, the days of Malcom X, Martin Luther King Jr, John F. Kennedy and Vietnam; an era every African-American who cares to know more about his/her roots cannot ignore; a period of fearless men and women who put their lives on the line for the right to be recognised as equal to their white counterparts.

Now, if someone were to say that Ali was being grumpy in his response to Ebert’s question, I would ask that someone how he/she would have felt and reacted in Ali’s shoes.

Hollywood had just replaced the real champ who was black with an image of a white champion they all (white America) longed to see, far being as it were from the truth – but like Ali purported, though not in those words – that’s just America being America – It must have its images.

How great it must feel now, that, almost 40 years after the first Rocky movie, Martin Luther King Jr’s Washington DC speech of August 28 1963 where he says: “I have a dream that my four children will one day live in a nation where they will not be judged by the colour of their skin but by the content of their character,” is being realised.

Coogler is fast rising as an African-American film director who stylishly has a sixth sense in wooing his audience into making them fall in love with his characterisation and portrayal of black heroes in his movies.

He knows when to throw in that limp associated with the way black people (who are full of themselves) walk (kakubhamba), the usual swag or way of talking that has somehow made African-Americans seem like they speak their own language, a different kind of English with an unapologetic accent that is sometimes hard to catch and yet flawless you can’t help but fall in love with his characters.

Sitting here, I am thinking, this is exactly what Ali would have preferred to watch in that private screening with his family and Ebert back in 1979.

“America has to have its images,” he’d said, fully aware, of course, of the power behind images and what they build in the human psyche in order to shape or disfigure our day-to-day lives.

And now, Coogler has done exactly that, by borrowing or so to speak from Ali’s “I am the real Apollo Creed” quote, Coogler has managed to pen a storyline that resurrects Creed from the grave in the form of his son, Adonis Creed, thereby creating a platform through which the greatness and blackness of the true heavyweight champ, Ali, is remembered and given its rightful place through his son.

I am sure Ali is giving a thumbs up right now as Creed 2 has not disappointed either, grossing over US$214 million worldwide when it opened up to cinemas in November last year.

At least this time the champ seems to have gotten his melanin back even though it’s 30 somewhat years late.

But the question still remains: Has America reached that point of maturity where we can now confirm that, indeed, the words of King Jr are being fulfilled and coming alive?

In those days of King, it was unheard of that a young black film-maker could land such a role in Hollywood such that now it seems like a huge step towards achieving a goal African Americans have been yearning for for over 400 hundred years but still racial slurs and marginalisation continue to rock America,even from the country’s highest office.