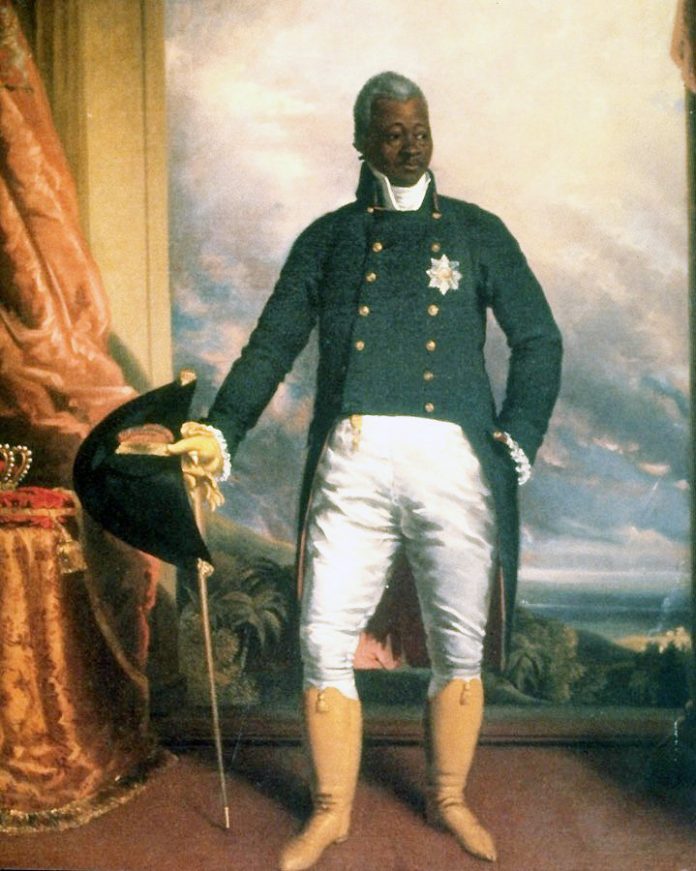 Born Henri Christophe in Granada on October 6 1767, his roots can be traced to West Africa where his parents had been captured as slaves.

At the age of 12, Christophe ran away from home to become a servant of a French naval officer.

His master later sold him to a former slave who had been freed named Coidovic, who operated a hotel in Cap Francois named Hotel de la Courrone.

Christophe worked in the hotel as a waiter and billard maker.

By 1798, due to his hard work and determination, Christophe had managed to save enough money from tips to buy not only his freedom, but also to marry Coidovic’s daughter.

When the fight against the English broke out, Christophe enlisted as a soldier and his service put him under the spotlight.

During Toussaint’s regime, he was promoted and served as Governor of Cap Francois.

Following the abduction of Toussaint by the French, Christophe began to despise the French to the extent that he changed his name from Henri to Henry.

It was at this point Christophe vowed he was ‘determined to change the language from bad French to English… and annihilate every trace of the Frenchman’.

At the age of 39, Christophe rose to power and took over the reins from Emperor Dessalines.

For the first four years of his rule, he was content with just being the mere president of the country.

It was also during this period he issued a decree changing the name of Cap Francois to Cape Henry.

In 1811, Christophe proclaimed himself the King of Haiti.

Oliver Ransford, in the book The Slave Trade; The Story of Transatlantic Slavery, describes King Christophe’s rise to power and rule as one that was remarkable.

“Here was a Negro ruling an affluent and partly Westernised state, and it was no wonder that men from all quarters of the globe watched intently to discover the sort of a job he would make of it,” he writes.

“What they saw was a queer mixture of good and bad-mostly-good but the reign was spiced with such odd and exotic flavours that we can easily understand why Haiti-watchers of the time often found themselves wondering whether they were observing an episode from real life or a fairy pantomime.

But this man also exhibited facets of character which had rarely been associated with Negroes.

He was possessed of enormous enthusiasms; his mind was crowded with thought processes which ranged far further than those of his Negro contemporaries; most important of all Henry Christophe was the first real Negro patriot, the earliest man to make his people pride themselves on their stock.”

First on the agenda, after assuming power, King Christophe aimed at restoring Haiti’s prosperity and to ‘make her strong enough to resist any more French attempts to reimpose their authority’.

To achieve this, King Christophe had to ensure peace prevailed in all sectors and this resulted in the establishment of valid statute law termed ‘Code Henry.’

Code Henry, though modelled on the Code Napoleon, was a monument to the king’s remarkable capacity of hard work.

President of the Royal Society, Sir Joseph Banks, described the code as: “Worthy to be written in letters of gold; nothing that I have seen which was written for the same purposes by whitemen is worthy to be compared with it.”

The emphasis of King Christophe’s domestic policy was hinged on education and on the inculcation of self-respect.

“My fellow citizens must be made capable by education,” King Christophe told Europeans.

“Enjoying the Constitution I intend for them… I think we shall be able to prove that we are capable of thinking of ourselves.”

These remarks by King Christophe made an impression on Europeans, with one of his European visitors describing him as, “…the only man I think in the world who could have been given trial to whether Africans have the same capacities as whitemen.”

Another description by one of King Christophe’s visitors which is more concerned with his character, says that he “ …appears to be a man possessing strong powers of mind attended with strong passions.”

Following the fall of Napoleon in 1814, King Christophe intensified the need to gain British support for his regime.

Ransford writes: “To this end he entered into a long and tedious correspondence with the English Abolitionists: his letters all demonstrated the most praiseworthy liberal sentiments.”

On August 15 1820, King Christophe suffered a severe epileptic seizure while attending mass at Lemonade and was in a coma for three days.

When he regained consciousness, the royal physician Duncan Stewart realised the King’s right side had been totally paralysed from the neck down.

King Christophe was moved to San Souci for further treatment but there was no improvement.

King Christophe rejected the idea of setting up a provisional Government to rule in his absence.

However, as the rumours of the King’s slow recovery leaked, there was panic.

Work in the plantations slowed down and finally stopped.

A royal regiment stationed at Marc and Duke of Marmalade was sent off to crush the uprisings.

However, the commander in chief of the regiment had been earlier disgraced by King Christophe, so he took the opportunity to seek his revenge by joining the rebels.

On October 7 1820, King Christophe learnt about what the commander-in-chief had done and he sent out other troops to fight the rebels.

On October 8 1820, Prince Joachim, who was in charge of the assigned troops, encountered 4 000 rebels just outside San Souci and his troops gave up and joined the rebels.

This spelt doom for King Christophe.

His dream of emancipating his people wholly was coming to an end.

With all hope lost, King Christophe loaded a pistol with a golden bullet, put it to his head and pulled the trigger.