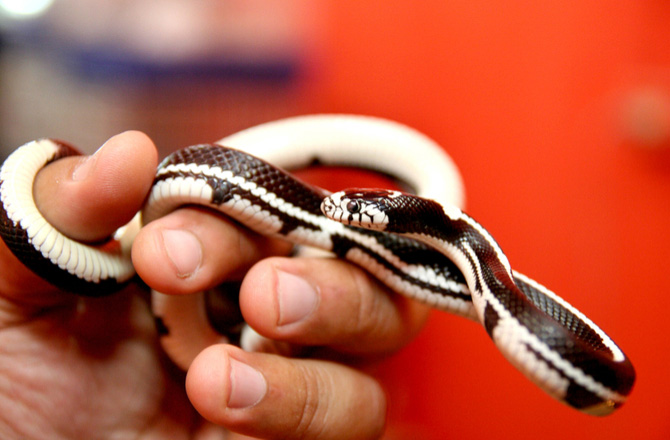 HERPETOMOLOGIST Ben Vermeulen claims snake repellents and so-called snake repelling plants are more myth than reality driven by the need to make a quick buck.
The so-called repellents are on the increase as the number of snakes in urban areas is rising.
In the Bible and African traditional culture, the snake is associated with evil.
While most snakes are not ‘poisonous’, they can still cause injury through bacterial infection and bleeding, due to the anticoagulant in snake saliva.
Snakes are fast, hard to kill, wild when injured and strike after they appear dead. So when these uninvited guests come into our homes, one needs to be well-informed to be safe.
Speaking to The Patriot, Vermeulen, who has handled snakes for more than four decades, said snakes could be kept away by doing basic things such as maintaining a clean and uncluttered environment.
“In my 44 years of experience with snakes, I have noticed a trend, in the last seven years, of the reptiles migrating into the urban areas from the farms because of the great explosion in towns. This is largely because of the chicken rearing business which has led to an increase in the rat population which is hunted by snakes,” said Vermeulen.
“People need to keep the rat population down to minimise the snakes’ food source so that they move on.
“Unkempt gardens, piling of rubbish and a lot of clutter make good hiding places for snakes. We only see five percent of snakes during daylight. The rest come out at night under the cover of darkness because this is when they prey on animals that come out for food at night.
“There is a myth about plants which keep snakes away and chemicals such as snake repellents, these do not work. There are people selling these and are simply making money out of the ignorance of others.”
Vermeulen, who keeps four snakes which he uses for lecture purposes in schools and for interest groups, said snakes had to be handled with care.
Having survived nine snake bites that saw him lose a finger, he said a snake could never be tamed.
“This cut finger always reminds me that you never cut corners when handling snakes and it is not good to be over confident,” he said.
“Snakes are fast, although they have limited thinking. They have a small brain which they use for finding food, defense, warmth and protection. You can never tame a snake, it just gets used to being handled a lot.”
Associated with Zimbabwe National Society for the Prevention of Cruelty to Animals and National Parks, Vermeulen also teaches people how to handle and identify snakes.
Vermeulen plans, if resources are secured, to establish a reptile sanctuary.
At least US$100 000 is required to set up such a sanctuary.
His eldest daughter, Shireen, has followed her father’s passion and is in the same trade in South Africa.
Meanwhile, the illegal trade in snake skins is on the increase threatening the survival of some species that include the python.
Researchers say the growing demand for handbags and other fashion items in Europe is fuelling the illegal trade.
Snake skin trade is so poorly regulated that it is extremely difficult to establish the true source of the skins.
The snake-skin business is extremely lucrative. It is estimated that half a million python skins are exported annually from South East Asia in a trade worth US$1bn (£625m) a year.