Home Old_Posts The Slave Trade: How much do you think you know? 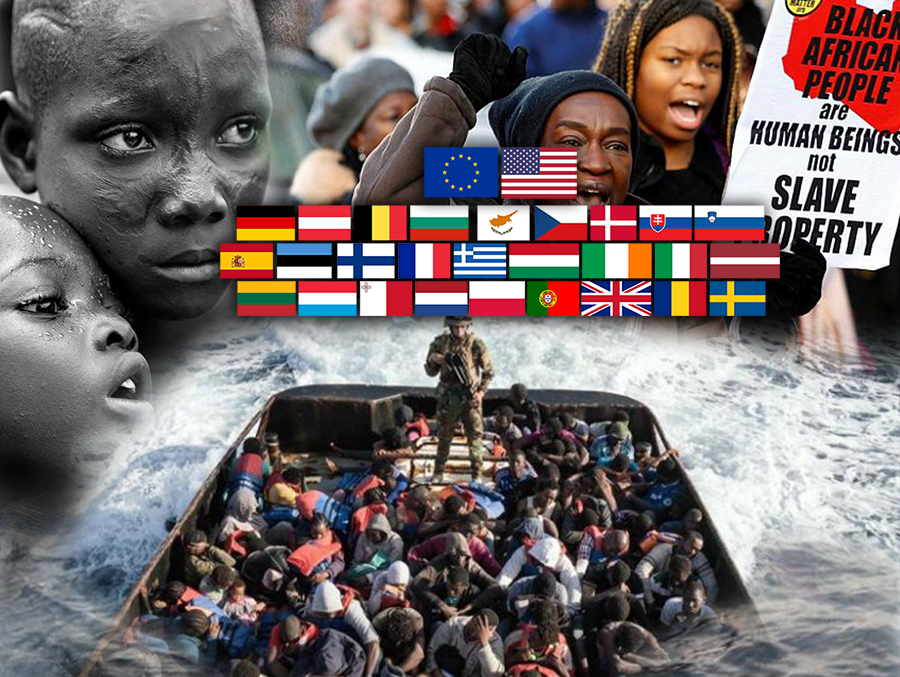 MANY people know that Africans, way back in history, suffered the indignity of being forcibly trans-located from their continent to be sold like goats and sheep in foreign lands.

The motive was commercial but the cruelty that characterised the enterprise suggests that colour consciousness, prejudice and xenophobia had a lot to do with it.

Most also know that the Arabs were the harbingers of the despicable trade as far back as the 7th Century and that Western Europeans joined the infamous trade in the 15th Century.

Perhaps, what most people do not know about the slave trade is that a lot of our problems in Africa have their roots in the trade.

For instance, the black people’s inferiority complex has deep roots in the slave trade.

Many Africans also do not appear to know that it was slave labour that produced the sugar, tobacco and cotton which created the wealth that made Western Europe and America ‘the First World’ economies they boast.

Filling this knowledge gap in our understanding of the slave trade will not only empower Africans in their struggle to develop their economies, but will also provide answers to a lot of the questions Africans have about the whiteman’s behaviour in our countries.

It all started in 1444 when a Portuguese captain brought an army and landed on the West African coast (known as Guinea at the time) and raided a coastal village kidnapping 272 men, women and children whom he took back to Portugal to sell on the Lagos market as chattels.

From then on, the Trans-Atlantic slave trade went viral, to the extent that virtually the whole Western Europe got involved in the lucrative trade.

It is possible that, at the beginning, some Portuguese had guilty conscience about enslaving Africans.

That guilt, however, was promptly assuaged by the Catholic Church which actually authorised and blessed the slave trade through a Papal Bull issued by Pope Nicholas V who encouraged the West Europeans to “…attack, subject and reduce to perpetual slavery the Saracens, Pagans and other enemies of Christ southwards from Cape Bojador and including the coast of Guinea.”

Once the moral issues were dispensed with by the Catholic Church’s decree, millions and millions of Africans were shipped across the Atlantic to work on plantations in the West Indies and on the mainland of South and North America.

Many more millions of these Africans died on the way and several more lived very short lives due to disease and the harsh and hostile conditions of living on the plantations.

At one point, for instance, it was calculated that 800 000 slaves had been shipped from Africa to Jamaica, but only 350 000 were physically present on the island. The rest had perished.

The Guardian newspaper of Britain provides some useful statistics in respect of the wealth the British alone made out of the Slave Trade. By the 18th Century, a fifth of the British elite had made their fortune through slavery: The British made £4 trillion in unpaid labour alone; the British alone, shipped around three million West Africans to the Americas; more than 10 million slaves, in total, died during the slave trade; much of the Britain we know today was built on slavery, including ports, cities and canals; 20 million pounds (£2 billion today) was paid by the British to compensate slave owners on abolition of slavery. No compensation has been made to the slaves themselves or to Africa.

The depth of inhumanity that characterised slavery and the slave trade makes conscious Africans sick to the core.

For instance, the barbarism and vulnerability the women slaves had to endure is literally difficult to read about.

If, however, a whiteman from the next plantation raped a slave, he would be charged, not with the crime of rape but a felony called trespassing.

After the abuse, the whiteman’s wife would have her turn to administer punishment on the poor African woman who had absolutely no choice in the matter.

Instead, there was always a man with an axe to chop off the arm.

Whippings and other forms of physical punishment were the order of the day on the plantations.

The breeding of slaves was one of the most dehumanising crimes committed by the whiteman on black people, ever.

It was adopted to complement the numbers from Africa in order to boost profits.

Under this programme, one slave woman was reported to have given birth to 41 children by age 41.

In Virginia, a plantation owner and slave breeder boasted that one of his slaves had given birth to 10 children in 20 years while another gave birth to nine children in nine years.

Also in Virginia, members of the Presbyterian Church bought two slave women for breeding and by 1835 the project had generated 71 slaves who were sold to the church’s great profit.

Protestant ministers in North America are reported to have owned 66 000 slaves while the Episcopal Bishop Falk alone owned 400.

As I read through the concluding pages of a book on the slave trade from which I gleaned the nauseating facts in the foregoing paragraphs, I began to see parallels

between the strategies used by the whiteman to subjugate the blackman during the three phases of the slave trade, the colonial period and the post-independence era.

The objective has remained commercial and the strategies have remained the same, only being modified to suit changed circumstances.

In fact, one cannot escape the conclusion that, while the slave trade might have officially ended in the 19th Century, slavery continued into the colonial era and is still upon us in the post-independence era.

Western Europeans with their kith and kin in the Americas have employed even more sophisticated strategies to continue the enslavement of the African.

Because of the importance we attach to the understanding of what happened during the slave trade, at The Patriot, we have reached the bold assessment that if one attempts to interpret the imperialist shenanigans of the current era without drawing lessons from the Slave Trade era, one risks getting lost in the jungle of information on ‘democracy and good governance’ generated by the same enemy to lead us astray and prevent an accurate interpretation of his real intentions.

Relations between Western Europe and Africa were defined during the four and half centuries of the Trans-Atlantic Slave Trade.

In that relationship, the whiteman is the rider while the blackman is the horse.

There has been no change to this relationship as far as the whiteman is concerned.

And, if Africans have to break free from the whiteman’s prison, being conversant with the strategies that sustained the Slave Trade should be the starting point.

As such, we think all Africans must know, in detail, what happened during the over 500 years of the Slave Trade to acquire sufficient skills of interpreting the present.

Questions of today have answers in the Slave Trade.

Why, for example, staff at the Kuwaiti Embassy in 2017 did not consider it criminal and undiplomatic behaviour to recruit many Zimbabwean women to distribute them to various homes in their country to serve as sex slaves. The answer lies in the Slave Trade.

In politics, ZANU PF and all the former liberation movements of southern Africa are undesirable elements/entities which are either under Western sanctions or are facing the prospect of such sanctions being imposed on them.

Their ‘crime’ is espousing pro-people policies while controlling ‘The Persian Gulf of Minerals’.

The West wants them removed from power just as much as the Ibos, during the Slave Trade, were not preferred as slaves and were sold cheaply for being ‘foul feeders’ and “…their tendency towards suicide.”

Equally, the slaves from the Congo and Angola were not preferred and were sold cheaply because they were considered ‘unintelligent’.

Meanwhile, the slaves from the Gold Coast were believed to be good domestics and, therefore, fetched more money.

With a view to putting together a viable body of literature on the Slave Trade, The Patriot will shortly introduce a serial column on slavery which will run for months, if not years.

The column will first interrogate both the European and the Arab slave trades.

Articles on slavery of the colonial era will come next.

It is hoped that by the time we come to the neo-colonial era, which is the present, Zimbabweans will be sufficiently equipped to identify the real enemy, his quislings and his strategies.