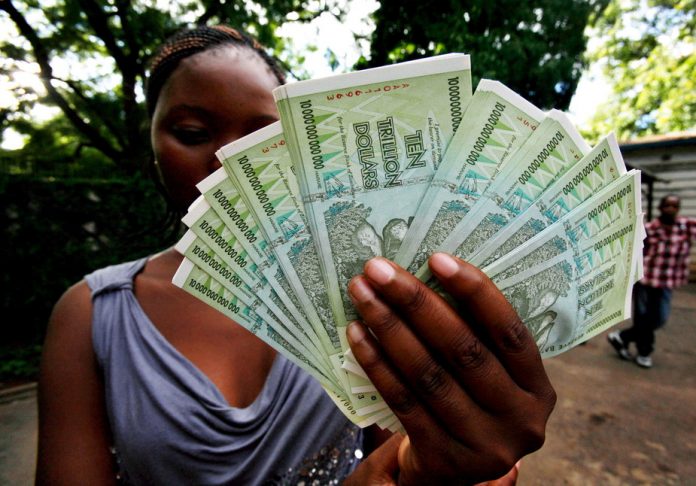 By the year 2003, inflation had risen to 500 percent, peaking to hyperinflation figures by 2007, with prices rising more than 50 percent every month, writes Dr Felix Muchemwa in his book The Struggle for Land in Zimbabwe (1890-2010) that The Patriot is serialising

BY July 19 2002, the Zimbabwe dollar had depreciated by more than 160 percent against the US dollar on the parallel market, and inflation stood at 144,2 percent (Zimbabwe Independent, Nov 15 2002, p.B1).
By the end of 2003, it was well over 500 percent.
Meanwhile, it was widely known in financial circles that the Minister of Finance, Dr Simba Makoni, had made it clear to the Cabinet that the Zimbabwe dollar was highly over-valued and that Zimbabwe should normalise its extremely tense relationship with international financial institutions, in particular, with the IMF, in order to get emergency balance of payment support for the local economy.
Together with the Reserve Bank Governor, Dr Tsumba, Makoni had, in mid-July 2002, proceeded to highly recommend the devaluation of the Zimbabwe dollar to the Zimbabwe Cabinet Committee on Finance and Economic Affairs, chaired by President Robert Mugabe. (Fingaz, July 4-10 2002, p.1)
On the other hand, the Zimbabwe Cabinet, in particular its chairman, Cde Mugabe, was too well aware that the IMF had, from 1999 to 2002, imposed sanctions on Zimbabwe due to the Land Reform Programme and was also insisting on the devaluation of the Zimbabwe dollar as a condition for the disbursement of the balance of payment support. (Fingaz, October 30 2002, p.6)
Most Cabinet members were also equally aware that Zimbabwe was under financial and economic sanctions intended to depreciate the Zim dollar, the very point underlined by ZDERA Sections 4 (C) (i) and (ii) and 4 (D) (i) and (ii) whose objective was a total reversal and disbandment of Zimbabwe’s compulsory Land Acquisition and Land Reform Programme. (ZDERA, December 21 2001)
The Zimbabwean Cabinet, in particular its chairman, could therefore not understand how a Finance Minister and a Reserve Bank of Zimbabwe Governor, with full copies of the ZDERA sanctions documents on their desks could ever recommend the devaluation of the Zim dollar, which in any case was already being devalued almost every second by ZDERA (2001).
It was, therefore, not surprising that when President Mugabe opened the third session of the Fifth Parliament of Zimbabwe in August 2002, he used extremely strong words against the devaluation of the Zimbabwe dollar.
He said: “Devaluation (of the Zim dollar) is dead” and he went on further to say that those who advocated devaluation ‘were saboteurs and enemies of the state’. (Zimind, August 9 2002, p.16)
President Mugabe proceeded to form a new ‘War Cabinet’, and Dr Makoni was not included.
Instead, his portfolio was taken over by Dr Hebert Murerwa. And, the biggest challenge confronting the ‘War Cabinet’ was ‘inflation’ due to the declining foreign currency inflows and the dwindling gold reserves which would otherwise stabilise the Zimbabwe dollar.
By the year 2003, inflation had risen to 500 percent (Richardson, p.542), peaking to hyperinflationary figures by 2007, with prices rising more than 50 percent every month. (Scoones et al, 2010: p.26)
The trend continued through 2007 and towards the end of 2008, it peaked at 231 000 000 percent. (Chimhowu, 2009)
The hyperinflation wiped out any value of any cash in hand for all levels of workers and any savings deposited in banks.
Cash transactions became more and more difficult, including the purchase of foreign currency.
Products became scarce amidst mushrooming black markets and, barter deals became more common. (Scoones et al, 2010: p.26)
Suprisingly, Zimbabwe’s GDP declined by only 40 percent between 2000 and 2008. (Blacking and Sachikonye, 2008)
In 2008, the UNDP gave a completely deliberate false report when it asserted that:
“Zimbabwe’s inflation is fundamentally caused by excess Government expenditure, financed by the printing of money in an economy with real GDP that has been declining for the last 10 years. Money supply growth has been completely decoupled from economic growth and the inevitable result being continued and accelerating inflation.” (UNDP Report, 2008)
The UNDP Report should have clearly stated that, for 10 years since 1998, Zimbabwe had been under financial sanctions and, therefore, had no source of foreign currency to stabilise its domestic currency, the Zim dollar, which remained the only currency to run the entire Zimbabwean economy without any foreign currency inflows.
The situation was made worse by the American sanctions law, ZDERA of December 21 2001. Foreign imports were hard hit, in particular, fuel, raw materials for industry, drugs for HIV and AIDS, cancer, anaesthetic drugs, medical equipment and even water treatment tablets.
Foreign currency inflows had declined from US$480,3 million in 1999 to US$49,3 million by 2006. Consequently, foreign exchange reserves had declined from US$830 million (three months import cover in 1996) to less than one month import cover by the year 2006.
The attendant foreign exchange shortages severely constrained Zimbabwe’s capacity to meet its foreign payment obligations and finance critical imports such as industrial raw materials, medical drugs and equipment, grain and other food imports in times of drought, as well as fuel and electricity. That way, loan repayment arrears amounting to US$109 million in 1999 had by 2006 increased to US$2,5 billion and to over US$7,5 billion by 2011.
In urban areas, water became scarce.
For the first time in Zimbabwe’s history, Harare had cholera and typhoid outbreaks because water treatment tablets could not be imported since Danish International Development Agency (DANIDA) had imposed sanctions on Zimbabwe for its compulsory land acquisition for the resettlement of peasant Africans.
Swedish International Development Cooperation Agency (SIDA) had also cut its donor funds to the Ministry of Education and some essential projects like printing of Braille books for the blind or visually challenged had come to a sudden halt in 1999. (Gono, 2007)