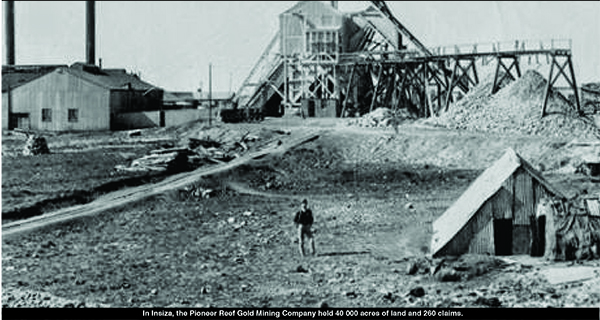 Mining districts were flooded with young European prospectors, some as young as 23 years, coming from all over the world including cities like Bristol, Glasgow, Birmingham, London and Bedford in the United Kingdom, writes Dr Felix Muchemwa in his book The Struggle For Land in Zimbabwe (1890 – 2010) that The Patriot is serialising.

THERE was Sir John Willoughby who held half of the Umzingwane District (Palmer,1977:p.42) and virtually the whole of the Gwelo (Gweru) District, all amounting to over 2 000 land claims. (Stigger,1971: p.23)
Part of the 8 850 cattle allocated to Sir Willoughby in December 1895 at the final distribution of Ndebele cattle was held in that land. (Stigger,1976: p.49)
Matabeleland Chief Native Commissioner Johan Colenbrander’s Matabeleland Development Company Ltd, which was floated in London in December 1894, also had a large land-holding in the Essexvale area, with thousands of Ndebele ‘loot’ cattle.
Other syndicated companies were the Consolidated Belingwe Development Company in Belingwe with 897 mining claims and 150 square miles of land, of which only 9 000 acres were under cultivation.
In Insiza, the Pioneer Reef Gold Mining Company held 42 000 acres of land and 260 mining claims.
In Selukwe, the Moonie Creek Development Company held 40 000 acres of land and 173 mining claims.
In Gwanda, the Gwanda Gold Prospecting Company held 20 000 gold claims and the Gwanda Syndicates Ltd, held 275 mining claims. (Rhodesia, August 1898, Vol. 2, p. 232)
And then, of course, Cecil John Rhodes held the entire District of Matopo Hills by December 1893.
Africans in the Matopo Hills were physically moved out to give way to Rhodes since, in its final report, the Land Commission of 1894, had recommended that, for security reasons, no native reserves would be created out of Matopo Hills.
This also meant the Ndebele people were to be prohibited from re-entering Matopo Hills after surrender at the end of the war in April 1894. (Nelson, 1975: p. 21)
Before the conquest of Matabeleland, Ndebele settlements were spread around the land.
Only the nature of land fashioned their design and formations, but Colenbrander, the first ‘Chief Native Commissioner’ in Matabeleland ignored this when after conquest, between December 1893 and September 1894, he got busy breaking the settlements down into mere ‘locations’ on European farms. (Stigger, 1976: p.45)
By June 1895, at least six administrative districts had been created out of the Ndebele settlements and European farms.
The districts included Bulawayo, Gwanda, Belingwe (inclusive of Battlefields block of farms), Mangwe, Umzingwane and Insiza. (Stigger, 1976: p.48)
By March 1896, Bubi, Gwelo, Selukwe, Bulalima and Matopo had been added to the existing districts.
The districts were administered by young assistant native commissioners (ANC) recruited from inexperienced young fortune hunters who had not succeeded in any type of occupation.
Some, like Bonar Armstrong ‘only a boy’ (under 21 years) were extremely too young to take such administrative responsibility.
It was ‘unlikely that any ANC was more than 30. (Stigger, 1976: p.51) and, they were attracted more by farms and extremely high salaries than by the call of duty and profession.
The high salaries came solely from cattle sales from the Matabeleland Stock Farm Vote which formed the British South Africa Company (BSAC)’s only source of funds for the company’s administration.
By March 1896, the uninterrupted erosion of Ndebele cattle holdings by the Chartered Company’s dependency on the livestock for revenue could be linked to the uprising. (Stigger,1980: pp.39-40).
It was only after 1899 that the BSAC turned to land sales as a source of administrative funds. (Stigger, 1971: p.14)
By 1895, the eve of the First Chimurenga, there was a boom in mining, farming and trade in all Matabeleland districts.
In less than two years after the conquest of Matabeleland, Bulawayo’s population had shot up from zero to over 3 000 Europeans (Kay, 1970: p.41) the vast majority of whom were traders.
By August 1894, the rapidly expanding city had been electrified and boasted over 100 general stores, three banks, 12 hotels, three newspapers, 26 share brokers and nine solicitors. (Phimister, 1988: p.10)
The traders, many of whom were also farmers were not only confined to the city. Many thronged the highways to Salisbury and Mafeking and many more roamed the countryside, in particular Ndebele villages, seeking barter trade, food and women.
And, most of the ‘farmers’, store-keepers or traders did not always buy food from their African neighbours.
Sometimes they stole it from those neighbours. (Palmer P, 1977: p.40)
The other big activity on the eve of the First Chimurenga was gold prospecting, mining and panning which had started almost immediately after conquest in April 1894. (Stigger, 1976: p.47)
The hope for the ‘Second Rand’ that had failed in Mashonaland had suddenly been resuscitated by the conquest of Matabeleland.
Mining districts were quickly registered north of Bulawayo around Wankie (Hwange), Bubi and Sebungu.
In the south, Gwanda, Belingwe, Tuli, Mangwe and Bulilima had also been established and registered by March 1896. (Rhodesia, 20 August 1898, p. 260)
These mining districts were flooded with young European prospectors, some as young as 23 years, coming from all over the world including cities like Bristol, Glasgow, Birmingham, London and Bedford in the United Kingdom.
Some came from even as far afield as Melborne in Australia, Rotterdam in Holland, and from Denmark, Ireland and America.
Gold syndicates, among them the Matabele Gold Reef, the Gwanda Gold Prospecting Company and the Gwanda Syndicated Ltd were also established in various mining districts.
Various Gold Reefs including ‘Ancient Reefs’, Nelly Reef and Celtic Reef were also registered in the Filabusi Mining District and mines such as the Hammond’s Mines in the Gwelo Mining District and the Webster Mine in the Bubi District were also operational by March 1896. (Grey, Reports, p. 46 – 50).
While European settler farmers in Mashonaland lacked capital and stock to start any meaningful farming before the conquest of Matabeleland, the contrary was true for the settlers in Matabeleland.
Until the outbreak of rinderpest disease in early 1896, their lack could have been in anything else, but livestock and land. (Stigger,1976: p.15)
‘Loot’ cattle made cattle ranching the easiest way to start a farm in Matabeleland. It was also the most effective way of taming the wild African land.
In fact, many European settler farmers, particularly ex-volunteers, had adopted cattle ranching as early as April 1894 when a dividend was declared for the volunteers. (Stigger, 1980)
Acting on the recommendation of the Land Commission of 1894, cattle inspectors were deployed to mobilise cattle throughout Matabeleland.
Land inspectors as well as native commissioners also had their cattle collection powers gazetted in the Government Gazette of December 7 1894, BSAC Government Notice No. 4 1894.