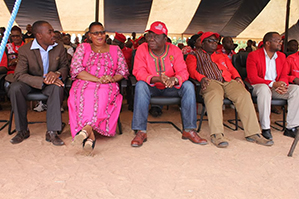 WHEN it is said by politicians it is called politicking, but when it is said by ordinary people it is then considered as the truth.
People are talking.
Be it in commuter omnibuses, beerhalls, church gatherings and any other public gatherings, the talk is about the demise of the MDC-T.
Some are very disappointed and very angry as they had faith in the party, but many are singing the ‘But we told you!’ hymn.
The disappointment and anger is not about MDC-T’s inability to beat ZANU PF in the July 2013 elections, but in the party’s lack of vision and no ideology.
Following its defeat in the July 2013 elections, everything went haywire: disorder intensified, violence deepened and desperation set in. People are beginning to see Morgan Tsvangirai and his party for what they really are.
They posted various comments on facebook and news sites.
Ntandokamdali Sibanda: “The MDC-T made its mark in the early days of its dispensation, and at one moment, we thought it was a sincere institution. “Unfortunately, since its formation, the MDC-T has been nothing, but a pack of wild dogs, only eager to bite anything within its territory.
“Last weekend surely marked the end of the MDC-T establishment.”
Ingrid Chimusoro: “Infighting intensifies in MDC because they are all after money.
“They do not have Zimbabwe at heart.
“We know that all things come to an end, but hey it was too soon for MDC.”
Evermore Kudura: “This is surely the end of the MDC-T.
“When The Patriot newspaper first wrote about the demise of the MDC-T in 2011, it was hard to believe it.
“Takangoti ayiwawo vemapepanhau vanongorotomoka munoti MDC ingaparare here?
“Maitaura semune mushonga mumukanwa.”
Tinashe Chimombe Musunda: “MDC-T is a confused house.
“These guys have shown they are not politically mature.
“Chamisa is a bootlicker chanting praise song to his battered leader of a century who hides under the finger of democracy while he is undemocratic.
“To Tsvangirai and his team, democracy means freedom of speech, democracy means people have a right to choose their leader and hold their leader accountable for their policies and their conduct in office.”
Paul Mushata: “Ndokuparara kwazvo vafana munoda kukura musoro.
“Come 2018, Zimbabwe will be a One Party State thanks to the crumbling of the MDC-T.
“ZANU PF ndiyo yoga inezvido zvevanhu.”
Succeed Kwetini: “Vachaspliter kanokwana kashanu yobva yafa MDC.
“Kufa kuparara zvekuita history.”
Reason Moyo: “This is the end of the MDC.
“Those clamouring for expulsions and suspension of others should know that MDC is not a single person, but a collection of individuals with their own loyal support bases.
“Removing any one of these individuals will leave the party poorer in terms of support.
“Removing an individual like Mangoma is the end of it all.”
Lilian Musara: “Like we have been saying all along, ‘the end for Tsvangirai is here’.
“Once the West abandons you, you are done for.
“Waiti zvinoguma nei ko Tsvangirai?
Senzeni Sibanda: Lalisithi kuzaphetha ngani?
“Mina ngavela ngatsho ekuqaleni ukuthi iMDC ayila lapho ezafika khona. “Sasithi nxa sikhulume lithi laba abamlomo ongahlalwa yimpukane.
“Nakonke selisilwa lodwa lithethisana liyangisana emphakathini.
“Hleka mtakaMdawini.”
Fungai Nyati: “Some people are saying it is the work of the CIO, ZANU PF and Mugabe.
“Let us call a spade a spade.
“The violence happening in the MDC-T is wrong.
“Let us not tell lies and blame it all on ZANU PF.
“Majaira kunyeperana nanaBaba Jukwa, takavhurika kare.”
Tendai Munyoro: “This MDC-T is always confusing.
“In 2005, they misled people into believing that Welshman Ncube was being used by ZANU PF, now Mangoma and Biti vatengwa neZANU PF.
“Last year they lied to the world that ZANU PF rigged the elections.
“When will Tsvangirai learn to say the truth as it is?
“Where on earth have we seen a party named after someone’s name?
“MDC-Tsvangirai?
“That is why the end of your political career became the end of the party.”