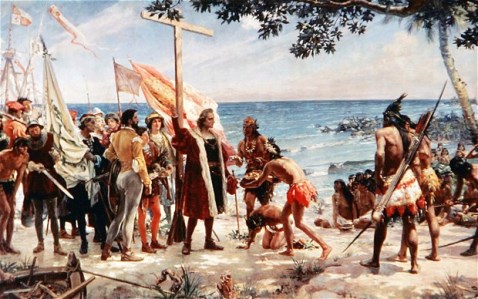 THE West wants the world to think all the blacks in the Americas are former slaves from West Africa.
This is done to deny the descendants of the indigenous blacks of America a chance to claim ownership of that land.
Around the time that slavery was legalised, the population of the indigenous blacks, particularly in North America, had thinned out.
This is when the whites decided to head to West Africa for slaves and the Jews were at the fore front of this scheme.
It is important to know that when Christopher Columbus abducted his first slaves from America, he had acted from the advice of five Jewish moranos (coloureds) who had accompanied him during his first voyage.
Columbus thus became the first man in Europe to ship black people from the Americas to be sold as slaves in Europe.
The rest of the Europeans then followed.
Columbus also returned with a lot of gold and silver from the Americas.
European nations flourished from Columbus’s gold and they managed to set up a global market system.
The Europeans wanted one commodity from West Africa, slaves.
In 1505, the first African slave raid was conducted by Columbus’s son.
Later, African Sultans began to sell their own people to be slaves in Europe.
The Europeans, through their colonial settlements in Africa, made it known to the Africans that slaves were a commodity on high demand in Europe.
However, it is important to note that European and American merchants had no direct connection and on the ground they would operate as competitors.
The trans-Saharan slave trade to Europe preceded the transatlantic slave trade. When slavery was legalised in the Americas, the approach that the Jews took in acquiring slaves was brutal.
First, the slave traders set up an agency in West Africa which would negotiate deals for slaves with the Africans.
This agency also had slave catchers who would capture and make the human cargo available for shipping at the coast.
The agency would go as far inland as 1 000 kilometres and capture people who they would force-march back to the coast.
On the way to the coast the kidnapped Africans would be bound together by a wooden frame.
Many of the captives would die on these strenuous journeys and their corpses would be left in the sun.
Between 1492 and 1619, many Moors of Europe were forced to migrate to Africa. For example, when the Moors were banished from Spain, the king of Portugal agreed to take them.
However, in 1496 the Portuguese forcibly split 700 Moorish children from their parents and sent them to the Portuguese colony of Sao Tome in West Africa.
This system of sending Moors to Sao Tome had actually begun in 1481 and around 1495, the Moors of Portugal were given the ultimatum to be baptised as Catholics or they be sent to Sao Tome.
In North Africa, the state of Morocco was too powerful for the whites to invade for slaves.
The Moroccans were black people and to this day, the original Berber black people are found in that country.
However, because of the procurement of white slaves and concubines, the leaders of these North African nations began bleaching out by the generations.
They became what are known as tawny Moors which are in reality a mixed mullato (coloured) people like the Latinos of Southern America.
Today the members of these countries are classified as Arabs and Turks, but they are descendants of the black Moors of old.
These Arabs would play a role in identifying the Moorish camps and villages and showing them to the Jews because they had made prior contact with them.
As though the whites were in power, blackness began to be seen in a negative light and these coloureds began dissociating themselves with the blacks of Sub-Sahara.
The Arabs joined in and began catching and transporting blacks to the coast for trading.
They called the captives ‘the cursed people of the book’ because the Muslims knew that many of them were the true Israelites who were being given into a curse. It was written in the book of Revelations 20 that the Saints (Moors) would overcome the heathens (whites) for 1 000 years.
After the 1 000 years, the devil and his heathens would be set free for a short time and then the eternal judgment would come at the end of the age.
During the years when the devil would be set free, the descendants of Israel were going to face enslavement and oppression from the heathens as was written in the Bible and Quran.
The Arabs (tawny moors) thus had a clear and conscious role in the enslavement of West Africans to the Americas.
One main reason why the Jewish agency was based in Africa was to make sure that slaves were available to be shipped whenever vessels from America docked at the harbour.
The slave ships would come from places such as Newport with rum and whiskey which was often distilled locally.
The rum deals were exceedingly corrupt.
The Jews would introduce their rum to the Africans by drinking along with their leaders until they were drunk.
The Jews would sell their often water diluted rum to the Africans until they fell into debt.
The Jews traded one Negro for 100 pounds of gunpowder and one Negro for 100 gallons of rum.
If a woman was over 25, the price was discounted by 25 percent.
This gave one Negro the value of about US$25 on the West African coast, but in America, the Jews would sell one Negro for about US$2 000.
If the Africans could not pay off their debt for the rum and gunpowder, the Jews would force them to give up some of their descendants as slaves.
The Africans would also give up their prisoners as slaves and would at times conduct raids on rival villages just to acquire captives.
The African leaders who resisted this trade were beheaded as was done to the indigenous Americans.