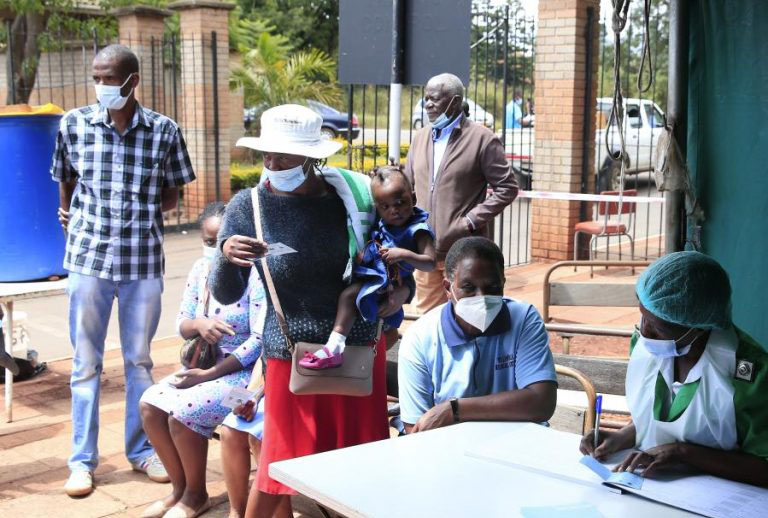 BLUNTING contagion through inoculating as many people as possible in the face of fast mutating virus is the reason for the latest move by many nations to make vaccination against COVID-19 mandatory.

Zimbabwe has not been left behind in calling for people in some sectors, such as the Civil Service, to be vaccinated.

The country is aiming for 90 percent vaccination to achieve herd immunity to ensure those who meet in large numbers are safe.

Vaccines have been described as critical to a quick return to ‘normalcy’.

According to a circular by the Secretary for Public Service Commission, Ambassador Jonathan Wutawunashe, referenced  ‘Measures for COVID-19 containment within the Public Service’ vaccination must be deemed mandatory for workers in large groups.

Part of the circular reads:

Many might wonder why vaccination must be mandatory for those who meet in large groups since there is a general belief that health issues are deemed to be personal and persons have a right to choose to receive or not receive any form of ‘treatment’.

Statements like  “…mandatory vaccination violates my autonomy”, “Previously I got sick after vaccination,”  or “…it is dictatorial,” become common in such times.

However, making vaccination obligatory is neither an attack on conservative groups nor trampling on individuals’ freedom to make medical decisions for themselves or their children.

It is not force but extending the best way of dealing with a situation.

Zimbabwe is one of Africa’s leading nations in the fight against coronavirus but has yet to attain herd immunity.

The Ministry of Health and Childcare said on Twitter recently that over 2,9 million people have been vaccinated against COVID-19 in Zimbabwe.

Employees have a responsibility to lower the risk of spreading COVID-19 and protect those around them at work by being safe to be around.

Vaccination greatly reduces infection rates for the diseases the vaccines protect against.

It has been proven that COVID-19 deaths are rare among the fully vaccinated.

According to US Centre for Disease Control (CDC) data, those unvaccinated face 11 times risk of death from the Delta variant.

Vaccination has always been part of our societies.

Most of our Zimbabwean children have received required shots which, in the past, were expected to be fully taken by the age of five but are nowadays taken in the first two years of a baby’s life.

As a result of this mandatory measure, all the children born in Zimbabwe are fully covered and thrive, greatly reducing child mortality.

Most school requirements adhere to the vaccine schedule for children.

That is why Arthur Caplan (2019) in  his article ‘Do Children  have vaccination rights’ submits that “…arguments about medical freedom and choice are at odds with the human and constitutional rights of children.”

In a scenario where people gather in hundreds, in the prevalence of this communicable disease of COVID-19, it is time to consider  taking vaccines more seriously.

A professor from the University of Zimbabwe, who requested anonymity, argued:

“There are some things that we have always unquestioningly followed because they are for public good and what is the big deal about the vaccine for COVID-19?

In the past, people have been vaccinated against yellow fever,  small pox and many other diseases. Freedom does not entail causing possible death to the person next to me. Human contact by occupational reasons prompts the need for new ways of  responding to a highly contagious disease and making sure all are protected is the way to go.”

Elsewhere, on a radio station, Professor Lawrence Gostin, the director of the O’Neill Institute for National and Global Health Law at George Town University, Washington, opined that COVID-19 vaccine must be mandatory for these reasons:

“It is causing strain on hospital systems, we have seen major surges in hospitals, and deaths which are exclusively among unvaccinated people in United States (…)People have freedom to make  choice about their health but when it comes to expos(ing)  another person to death risk, it is a different thing.”

It is time to know that science is true and do what is necessary.

In the past, the smallpox vaccine played a pivotal role in reducing mortality and case rates.

Smallpox was a highly contagious fever, inducing illness infamous for causing a severe rash on the face and arms which killed or often left survivors scarred for life.

By the mid-19th Century in Europe, regions with mandatory vaccination proved to have substantially fewer deaths from smallpox than those that relied on voluntary vaccination.

Some refused to get the shot, claiming the vaccine order violated their personal liberties under the Constitution.

People like Henning Jacobson took the anti-vaccine crusade all the way to the US Supreme Court.

However, the nation’s top justices issued a landmark 1905 ruling that legitimised the government’s authority to  ‘reasonably’ infringe personal freedoms during a public health crisis by issuing a fine to those who refused vaccination.

Those who utterly refused were fined.

Since the COVID-19 pandemic has continued to evolve with the Delta and Delta plus variants threatening us, Zimbabwe must not just aim at topping Africa with regards to organised vaccination but ought to reach herd immunity.