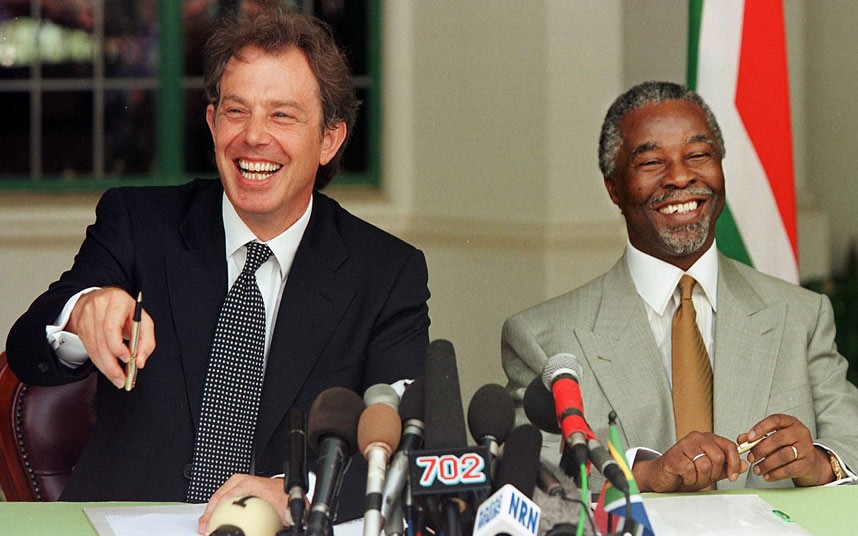 THE stunning revelation by former South African president, Thabo Mbeki, that Tony Blair pressurised him to participate in a regime change scheme to remove President Mugabe from power using military means is one of those moments which tell us a lot about why and how wars are fomented by the West and fought on African soil. For instance, the reasons given by Blair for wanting to undertake a war of aggression in Zimbabwe range from Mugabe’s alleged dictatorship and authoritarian rule to his alleged violation of human rights against his own people!
Blair’s strategy was to concoct a narrative on human rights abuses, foist it on Mugabe’s record and then occupy a moral high-ground from which he would legitimise his war against Zimbabwe.
Yet in reality such moral posturing is at odds with the actual reasons why Britain was supposed to wage a war in Zimbabwe!
Here is why!
a) Blair was keen to punish Zimbabwe for reclaiming its land from British settlers but such punishment had to be disguised as a human rights crusade rather than as a racist war of revenge and recovery of land for whites.
Noticeable here is how the human rights discourse is nowadays being used as a tool by the West to delegitimise those defiant African leaders reluctant or unwilling to follow instructions from Britain and her allies.
In the same vein such a discourse is used as a weapon to rally the whole Western world against a targeted country such as Zimbabwe so as to isolate it, demonise its leaders and governance system just before launching military operation as Blair planned to do.
b) The argument that a leader of a non Western country is violating human rights of his own people is often used by Britain, the USA and their allies to justify military interventions in weaker states; Iraq, Afghanistan and Libya are good examples where human rights abuses were cited to justify Western wars of aggression during which hundreds of thousands were killed and wounded.
The fact that after unleashing devastating wars in these countries and installing puppet regimes of their choice the human rights record has worsened in all of these targeted countries says more about wars launched to access material resources and less about human rights!
Is it not morally obscene for Western countries to intervene in weaker states militarily ostensibly for human rights reasons and proceed to commit war crimes on an epic scale as happened in Iraq, Afghanistan and Libya?
More than a million civilians have perished in Iraq and Afghanistan while in Libya It is like saying, please do not kill your own people, allow us to do a more efficient job of killing them ourselves for purposes of looting their resources!
This was the fate which awaited Zimbabweans but for the fact that Western wars in Iraq and Afghanistan proved costly and messy and turned out to be much longer and more difficult than anticipated!
c) It is important for us to recognise that nowadays Western wars of aggression are not packaged, branded and spearheaded by those putting on the beard and proverbial tail of the devil for all to see! Often those Western leaders championing such wars are public relations personalities always smiling and even looking benevolent like Blair!
Be they British, French or American, all these leaders sound and look Christ-like, seemingly determined to champion good causes but ruthless in the art of human slaughter for purposes of material gain! As the economic decline of the West becomes precipitous while the rise of the East gathers momentum, Africa should expect more Western wars over resources to visit the continent sooner rather than later!
d) Had the war that Blair planned for Zimbabwe been fought, it would have been a war over land below which lie resources such as diamonds in Chiadzwa, platinum in Chegutu, coal in Hwange and Gokwe, iron ore in Kwekwe and gold in all provinces of the country! And it is critical for us to understand that such wars will always be disguised as messianic and redemptive for natives when in reality they are so for the metropolitan populations whose own resources have been dwindling at an alarming rate.
e) And to dramatise why Western wars over resources in Africa are more or less inevitable we need to recall that Britain literally became a major world power on the back of British enslavement of Africans which in turn funded the industrial revolution!
This was soon followed by colonisation of the continent itself which again availed cheap African labour and resources to Britain.
Put differently the tiny isles , barely 93 thousand square miles in size, became Great Britain on the basis of the labour and resources which Africa has been surrendering to it from the 15th Century right up to the present. In the process its population has grown up to 64million people whose needs cannot be met by British resources alone.
In sharp contrast Zimbabwe which has 13million people only is about 150 thousand square miles in size and is far bigger and richer resource- wise than Britain.
Therefore Britain regards Zimbabwe as its normal hunting ground for cheap resources in order to augment its own.
When we add other African countries which Britain has been looting for centuries we realise the degree to which it has been dependent on other countries for its prosperity!