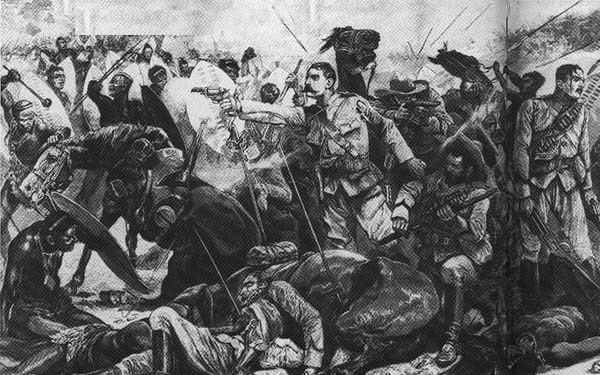 ‘When the band of brigands euphemistically called the Pioneer Column invaded our country and hoisted the British flag on our land, on September 12 1890, on behalf of the robber regime of England represented by Cecil John Rhodes, it was the most catastrophic aggression on us, on our land. The sun should not have shone on that day, there should have been an eclipse of the sun’

THE import of this belligerence was not lost on our people.

They knew the most evil and diabolical monster had reared its ugly head in the land.

They were not mistaken; the God of the land, Musikavandhu confirmed their worst fears; Chaminuka’s prophecy about ‘Pfumo Jena ravasina mabvi’ had come to pass.

It was indeed a most evil menace that had to be driven out at all costs or the land would never be at peace.

Our people had seen the column of armed bandits and convicts snake through their land, and they knew they were in deep trouble.

The directive from all Mwari/Mlimo shrines, at Mabweadziva, Njelele, Ntabazikamambo and other places, was that the white invaders had to be wiped out.

Mwari’s mediums told them the whiteman did not come in peace.

This time the whiteman did not come to trade in gold or ivory or other precious stones, he came to install himself a white king in the land of the Africans — to own and control both the land and the people.

The whiteman would wear diamonds and gold and emeralds which the Africans dug out of the African soil but could never dream of wearing or benefitting from.

But there were defence forces in the land.

King Lobengula had challenged the British claim that he sold his land to the Crown in the so-called Rudd Concession.

So the band of brigands, fully aware that King Lobengula was not only a man of his word but had forces to enforce it, avoided passing through his territory.

His defence forces were well known for being some of the fiercest in Southern Africa, so the whiteman was never at peace — there was a force to reckon with in Matebeleland.

For this reason Rhodes and Jameson planned and executed a murder and robbery raid on the King of the Ndebele in 1893.

King Lobengula was dislodged from his land and his forces lay low but only for a time.

In 1896 his forces regrouped, proclaiming their offensive against the whiteman on  March 20 1896 with a war dance at a cattle village in Esigodini, declaring it was time for the whiteman to leave the land of the Africans.

This was the beginning of the First Chimurenga.

At the helm were regimental commanders, chiefs,  Mkwati the High Priest at Ntabazikamambo and royalty such as anti-white Nyamanda, Lobengula’s oldest son, Lozikeyi, Lobengula’s formidable widow who distributed ammunition at the beginning of the First Chimurenga as well as many of Lobengula’s queens, his brother Tshakalisa and others.

This Chimurenga offensive literally galvanised the whole of the land of the Ndebele with the exception of only two chiefdoms — that of Faku Ndiweni and Gampu.

Chimurenga raged throughout the land; the whiteman could not prevail against the Ndebele warriors.

The battle of Umgusa, on April 25 1896, was the final defeat of the whiteman in the First Chimurenga. Ndebele warriors declared their victory against the whiteman by surrounding Bulawayo: “…nearly 2 000 Ndebele warriors armed with Martini Henri Rifles . Also, 100 members  of the Matebeleland Native Police deserted and joined other First Chimurenga  warriors armed with Winchester repeater rifles and Lee Metfords elephant guns, Tower muskets and blunderbusters in addition to assegais, knobkerries and battle axes, plus plenty of ammunition surrounded the city.” (Muchemwa:2015)

This was the end; despite reinforcements from England, Ndebele warriors remained undefeated Rhodes had to call for an indaba.

In Mashonaland, the story was the same.

With the exception of Gutu and Chirumhanzu chiefdoms, the whole of Mashonaland rose against the white invaders, routing them until the whiteman’s genocidal intent forced a strategic retreat. “…while the official death toll has been put at 8 000, the actual massacres inflicted upon the Africans by the European occupation forces using dynamite were genocidal. The recorded figure of 8 000 Africans dead was an extreme underestimation of the reality on the ground. The mass casualty effects of dynamite explosions often accounted for thousands of Africans dead per fortress…. And then, more Africans died from famine, and starvation caused by a deliberate genocidal policy of food deprivation through looting and destruction of all food available to Africans, including live crops still on the field. (Muchemwa: 2015)

Thus, failing to defeat the First Chimurenga warrior, the whiteman resorted to genocide.

“First Chimurenga  (1896-98) had been the bloodiest, the most violent, sustained, and highly organised instance of resistance to colonial rule anywhere in Africa. A genuine people’s war in which individuals fought because they chose to, not because they were ordered by their leaders. The European casualties were much higher than in any comparable revolt….” (Muchemwa: 2015)

This demonstrates effectively and conclusively that there was a defence force in the land who fought heroically and brooked no enslavement to the whiteman.