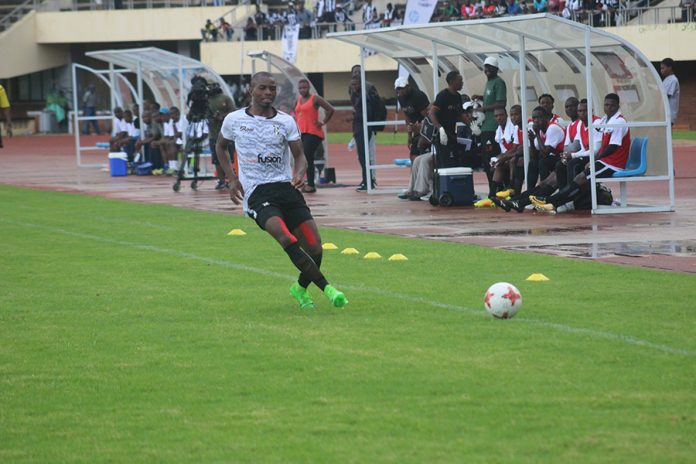 IF one was to describe this Saturday’s match at Baobab Stadium in four words, it would be: ‘Thriller beckons in Mhondoro-Ngezi.’
Definitely, a thriller is in the offing in this Week Eight of the Castle Lager Premier Soccer League (PSL) as Ngezi Platinum Stars host Highlanders in an encounter set to light up the small mining community of Mhondoro-Ngezi.
The match comes exactly six days after the headline Harare derby that left the blue side of the capital with a bruised ego as Dynamos lost 0-1 to CAPS United at the National Sports Stadium (NSS) courtesy a Denver Mukamba strike.
Highlanders’ long trip to Baobab Stadium at the heart of Mhondoro-Ngezi, an emerging mining town that has thrived through platinum, needs no further rewards than three points that will see them leapfrog hosts to top the 18-team log.
The soccer-loving community has not disappointed in rallying behind their side that knows no defeat this season.
Baobab Stadium has been a fortress for the white metal miners, and this year, the log leaders have a 100 percent record at home.
As one of the best stadia in Zimbabwe showing great work of architecture and investment, the visitors have not struggled against the miners since 2016 when they met at the same venue. Highlanders won 4-1 on May 14 2017.
Of the four league meetings between the two, Highlanders have claimed three matches, while Ngezi Platinum Stars won their first league match against the Bulawayo giants 3-0 on August 26 last year.
That was the last league meeting between the two.
Highlanders coach Madinda Ndlovu will be looking for a fourth league victory against Ngezi Platinum Stars and in the process, claim pole position on the PSL log.
Separated by two points, the two teams go into the match coming from straight victories in the past matches they played.
Highlanders were at home to Shabanie Mine where they won 3-1 after coming from behind to claim the match before a bumper crowd at Emagumeni (Barbourfields Stadium), while Ngezi Platinum Stars beat returnees Mutare City Rovers at Baobab Stadium.
Both teams unbeaten in the league so far, go into the match on equal footing in a winner takes all match. Bosso are two points shy from hosts on the log.
The midfield prowess of young Nigel Makumbe has propelled Bosso (Highlanders) this season, while winger Gabriel Nyoni has been forceful at Highlanders.
Former Hwange man Newman Sianchali has been delivering for Bosso, while the now matured Ozias Zibande has been consistent in delivering goals.
With three goals under his belt, Zibande has been in the trenches at Bosso during the days of former gaffer Kelvin Kaindu.
On the other hand, Peter Mudhuwa has been steading the Highlanders defence, while Aerial Sibanda has been guarding the posts.
Going into the match, Bosso, who have upset Dynamos away at Rufaro, see no obstacle at Baobab Stadium as statistics also favour them if history is anything to go by.
Three of the four matches played by two have seen three or more goals being scored.
However, Ngezi Platinum Stars coach Tonderayi Ndiraya has a strong defence that has conceded twice in seven matches.
They have scored on 10 occasions with Clive Augusto and Xolisani Moyo being the team’s top goal scorers.
The team has Terrence Dzvukamanja at their disposal with the Chegutu-bred forward capable of upsetting the black and white army, Highlanders.
Other players at Ndiraya’s disposal include goalkeeper Donovan Bernard who has more than four clean sheets this season, Donald Teguru, Tichaona Chipunza and Liberty Chakoroma, among others.
Elsewhere, Mutare City clash with defending champions FC Platinum at Vengere Stadium in Rusape this Saturday.
Both teams lost last weekend’s matches.
FC Platinum hope to bounce back to winning ways after a shock 0-2 defeat to Bulawayo Chiefs last Saturday.
Bulawayo Chiefs are out to dehorn Black Rhinos at the ceremonial home of football, Rufaro Stadium this Saturday, while Students, Herentals and the Sunshine Boys, Harare City clash in a low profile Harare derby across town at the NSS.
CAPS United have tricky opponents, debutants Nichrut at Ascot Stadium in Gweru this Saturday.
The Green Machine, still basking in the derby delight, face the gold miners who are establishing themselves well in the top flight.
The Shurugwi-based outfit have had a decent start to the season with nine points from seven games.
They have won twice against Yadah and Mutare City Rovers.
The debutants shared spoils with Chicken Inn, Shabanie Mine and ZPC Kariba.
Their two losses were against log leaders Ngezi Platinum and Highlanders.
CAPS United need to treat the ‘newcomers’ with caution as they have the potential to upset them.
On Sunday, wounded giants Dynamos welcome Bulawayo City at Rufaro Stadium, while Triangle host Chapungu at Gibbo to wind up Week Eight action.
It’s certainly set to be an exciting weekend in the Castle Lager PSL.
Fixtures
Saturday
Mutare City Rovers vs FC Platinum – Vengere Stadium
Black Rhinos vs Bulawayo Chiefs – Rufaro Stadium
Herentals vs Harare City – NSS
Nichrut vs CAPS United – Ascot Stadium
Chicken Inn vs Yadah – Luveve Stadium
Ngezi Platinum Stars vs Highlanders – Baobab Stadium
Shabanie Mine vs ZPC Kariba – Maglas Stadium
Sunday
Dynamos vs Bulawayo City – Rufaro Stadium
Triangle United vs Chapungu – Gibbo Stadium