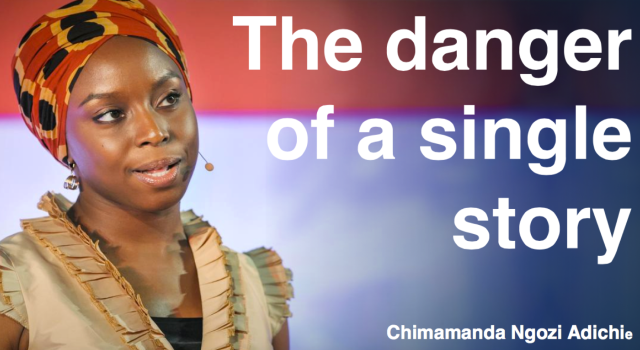 The Danger of a Single Story
By Chimamanda Ngozie Adichie
Published by Researchgate (2009)
ISBN: 257306081

NIGERIAN novelist Ben Okri once wrote: “To poison a nation, poison its stories.
A demoralised nation tells demoralised stories to itself.
Beware of the story tellers who are not fully conscious of the importance of their gifts, and who are irresponsible in the application of their art; they could unwittingly help along the psychic destruction of their people.”
Stories define a people’s history and aids in shaping their future.
As Okri writes, once a people’s story has been corrupted their fate is doomed.
Africa has suffered the consequences of having its story portrayed in negative light by the West.
In the booklet The Danger of a Single Story by Chimamanda Ngozi Adichie, she warns against the misunderstanding of others; noting how generations of misrepresentation and stereotypes have dominated mainstream Western society.
She argues mainstream narratives reduce ‘others’ to damaging stereotypes, which become internalised and must be challenged.
“What this demonstrates, I think, is how impressionable and vulnerable we are in the face of a story, particularly as children,” writes Adichie.
“Because all I had read were books in which characters were foreign, I had become convinced that books, by their very nature, had to have foreigners in them, and had to be about things with which I could not personally identify.
Now, things changed when I discovered African books.
But because of writers like Chinua Achebe and Camara Laye I went through a mental shift in my perception of literature.
I realized that people like me, girls with skin the color of chocolate, whose kinky hair could not form ponytails, could also exist in literature.”
The booklet is therefore also an account of today’s political climate, reflecting the current power struggles in media representation.
Adichie is critical to people’s understanding of the way the world is presented in an increasingly intolerant Western society.
“Years later, I thought about this when I left Nigeria to go to university in the United States,” writes Adichie.
“I was 19.
My American roommate was shocked by me.
She asked where I had learned to speak English so well, and was confused when I said that Nigeria happened to have English as its official language.
What struck me was this: She had felt sorry for me even before she saw me.
Her default position toward me, as an African, was a kind of patronising, well-meaning, pity.”
Adichie highlights how the ‘single story’ other nationals had about Africa made it impossible for them to view Africans as equal beings.
This explains practices such as slave trade and colonisation under which Africans were treated inhumanly by whites.
“My roommate had a single story of Africa,” writes Adichie.
“A single story of catastrophe.
In this single story there was no possibility of Africans being similar to her, in any way.
No possibility of feelings more complex than pity.
No possibility of a connection as human equals.”
Adichie castigates how Africa was painted in negative light in Western literature and media.
“So after I had spent some years in the US as an African, I began to understand my roommate’s response to me,” writes Adichie.
“If I had not grown up in Nigeria, and if all I knew about Africa were from popular images, I too would think that Africa was a place of beautiful landscapes, beautiful animals, and incomprehensible people, fighting senseless wars, dying of poverty and AIDS, unable to speak for themselves, and waiting to be saved, by a kind, white foreigner. I would see Africans in the same way that I, as a child, had seen Fide’s family.”
To address the problem, Adichie writes there was need for Africans to ensure that Africa’s other side is made known to the world.
With more Africans writing stories about themselves, Africa’s true story will be known.
“I’ve always felt that it is impossible to engage properly with a place or a person without engaging with all of the stories of that place and that person,” writes Adichie.
“The consequence of the single story is this: It robs people of dignity. It makes our recognition of our equal humanity difficult.
It emphasises how we are different rather than how we are similar.”
The sooner Africans commit pen to paper to tell Africa’s story the better.
That way Africa will be celebrated for what it truly stands for.