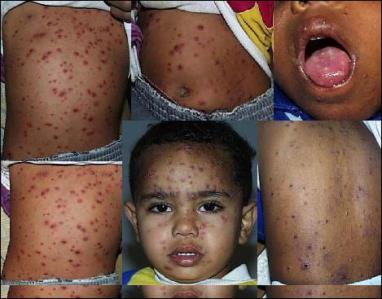 SUMMER’S here and with the temperatures soaring, it is not only the unbearable temperatures that can harm you but a large variety of diseases that can put a damper in your plans.
There are top five diseases that people should lookout in summer.
Chicken pox is one of the diseases found in summer and most people wonder where this condition got its name?
Well, it is because the boils resembled the peck marks of a chicken, and the disease was christened ‘chicken pox’.
It is caused by the Varicella zoster virus. Seen right at the onset of summers, chicken pox manifests as itchy red rash like spots or boils all over the body, usually in children.
Spread by air-borne particles, the disease spreads when an already infected person sneezes or coughs. Another mode of transmission is if a caregiver touches the blisters or the fluid oozing out of it.
Some of the first symptoms are fever, headache and sore throat. After about a day or two a rash like blister appears in a localized part of the body which will later spread to the entire body.
The boils or blisters burst after about 2 days and once they crust over, the patient can resume their daily activities. Until then, it is important that the he or she is kept in complete isolation and given a good amount of rest.
It takes about 10 days for the body to recover from the illness.
On the bright side, once you suffer from chicken pox you will not contract the disease again due to the natural immunity the first attack confers on you.
There is a vaccine available to protect yourself against this virus. Even so, some simple precautions like washing your hands thoroughly after visiting a common or crowded place and to isolate a person suffering from the disease to prevent its spread can be exercised.
Measles sometimes called rubeola or morbilli, is also a common condition seen in the summers.
It is caused by the paramyxo virus, it infects the lining at the back of the throat and is transmitted the same way as chicken pox.
Its initial symptoms are high fever, cough, runny nose, sore throat and red eyes.
These symptoms later progress to a measles rash (rashes that look like small red spots), fever, cough, runny nose and tiny white spots within the mouth.
The measles rashes usually appear three or five days after the initial symptoms and start around the hairline and face in most cases.
The MMR vaccine (Measels, Mumps and Rubella) usually given to all children is highly efficient in preventing the disease from occurring.
Another dangerous summer disease is Jaundice also called Hepatitis A.
It is a water-borne disease caused mainly by contaminated water supplies and food cooked in unclean places. Jaundice is spread by the Hepatitis A virus, which affects the liver causing over-production of bile.
The initial symptoms of jaundice include yellow discoloration of the skin, mucous membranes and the whites of the eyes, light-colored stools, dark-colored urine and itching of the skin.
A vaccine is available, but to protect yourself better, you should avoid eating food made in unhygienic places. Drink only filtered or double boiled water.
Typhoid commonly known as typhoid fever, it is water borne disease passed on through the oro-feacal route.
It is caused by bacteria called Salmonella typhi. Passed on by the oro-feacal route, the bacterium is commonly found in unsanitary food or water sources.
Its common symptoms include high fever, fatigue, and weakness, pain in the abdomen, headache, loss of appetite, and sometimes a rash. Once treated a person can still carry the bacteria but not suffer from the disease.
These people are called ‘carriers’ and often are the cause for further spread of the virus. There are two types of vaccines available to protect you against typhoid.
One is a vaccine that uses the killed bacteria, and is injected into a person.
The second is the attenuated or weakened bacterium that is administered in the form of medicine or a pill.
Mumps is another extremely summer contagious viral disease.
It is known to occur mainly in children during peak summer.
It is caused by the mumps virus and is transmitted when an infected person sneezes or coughs.One of the most common symptoms is the swelling up of the person’s salivary glands at the base of the neck.
It typically starts with a few days of fever; headache, muscle aches, tiredness, and loss of appetite, and is followed by swelling of salivary glands. The MMR vaccine (Measels, Mumps and rubella) can help protect you from contracting the disease.
Summer can be a beautiful time to spend with friends and family if you are healthy.
All you need is awareness and a few precautions to enjoy the good times.
https://www.thehealthsite.com