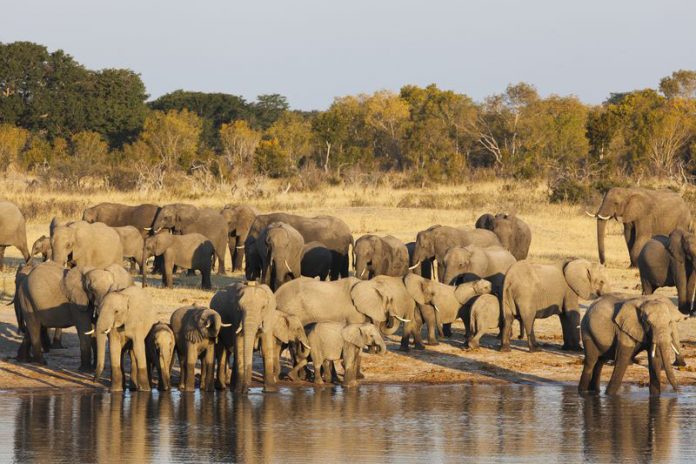 ONE of the traditional sources of national revenue of most countries is tourism, a sector to which a few governments attach as must importance as it actually deserves.

That sector, if properly managed, can generate a great deal of monetary wealth for many nations.

Tourism markets products most of which are in the form of attractions. Zimbabwe has a wide variety of such products, including wild life, of which elephants top the list.

Some Western governments have brewed an utterly unnecessary and most unreasonable controversy by appealing to international organisations for a ban on the hunting of elephants.

Tourists who come to Zimbabwe from regions where the elephant is unknown are fascinated by herds of these ‘living fossils’ that resemble huge living boulders.

The African elephant’s European cousin was the now long extinct ‘mammoth’. India is one other country where elephants can still be found, but they are smaller and less attractive than the African jumbo.

Tourists visit destinations to either hunt or photograph, or to just admire whatever wildlife exists in the area.

In some cases they actually ride some of the animals as is the case in India where many elephants are tame and are ridden. Some tourists visit destinations for health reasons.

Of the five activities, the most financially beneficial to the tour – operators, tourists themselves and the host government is hunting.

The hunters pay quite large sums of money for licenses and a part of that is paid as tax.

Elephants are viewed as attractions by Americans, English, Scottish, German, French and any other person to whom African wild life is foreign; to us Africans, elephants are to our agricultural crops what baboons are, a real menace.

To our homes and very lives, they are a real threat. A herd of elephants that passes through a residential area leaves ruined huts, houses, granaries and quite often trampled and crushed human bodies!

In addition to all that, elephants indiscriminately destroy trees, plants, wells and in some instances even roads. These are facts known to every person who lives in regions with large herds of these animals.

A wise elephant conservation policy should inevitably involve regular culling in which government participates through its tourism ministry, either as a seller or as a tax revenue benefactor.

There is certainly no wisdom in letting wildlife that is a threat to communities, their sources of food, water and fuel reproduce and become hundreds of thousands.

Wild life is a national resource and must thus be treated for the benefit not detriment of the nation.

Zimbabwe would be well advised to sell some of its elephants on the hoof and to target as potential buyers those countries currently opposing the organised hunting of elephants.

If, just as an example, Australia or the United States, were asked to buy some of Zimbabwe’s elephants, they can surely create a safe sanctuary for a couple of hundreds of some of those creatures in their respective climatically suitable regions.

Other countries, especially in the world’s temperate zone, may consider having a number of zoos particularly for elephants.

The other solution to this obviously unnecessary problem would be for economically developed nations to sponsor financially, the trans–location of some of Zimbabwe’s elephants to nations with natural habitats for them. We are talking about tropical, sub–tropical, equatorial countries such as Burundi, Cameroon, Chad, the Central African Republic and others in other continents.

In the absence of a better approach, an exchange programme can be looked into with friendly South American, Asian countries and South Pacific Ocean islands whose fauna can get quickly acclimatise to Zimbabwe. That would mean building zoos to accommodate such animals.

Zoos in Zimbabwe with such foreign wild animals, could quickly promote domestic tourism just as those with elephants, hippos, pythons and rhinos could abroad.

In addition to selling some of our wild life, the Tourism Ministry could organise television photographic programmes that can be sold abroad, particularly to Arabic nations, where wild life is very scarce, if not non–existent.

Such programmes would be produced by the interested countries so that there should be no language distortions or difficulties.

A photographic team from Dubai or Kuwait even China or Vietnam could tour the Hwange National Park for an agreed charge and take pictures of whatever could be of interest and value to them.

The Government could raise large amounts of revenue that way and at the same time effectively market the nation’s tourism products.

Television pictures are much more effective for marketing because they combine vision, sound, motion and colour, pamphlets, brochures, leaflets, folders, magazines, newspapers and booklets have the advantages of portability, permanence and can be easily circulated from one person to another as is the case with libraries.

The radio has the well-known advantage of the warmth of the human voice, a quality it shares with television and the cinema.

The preference of one or another of these media to promote tourism products depends on the targeted market, its literacy level, whether it lives more in a world of sound (radio and television) than that of reading, and its economic and social development levels.

The promotion of tourism should be aimed at benefiting both the Government and the people themselves because tourism products, in effect, belong to them collectively as a nation.

Saul Gwakuba Ndlovu is a retired, Bulawayo – based journalist. He can be contacted on cell 0734 328 136 or through email. sgwakuba@gmail.com