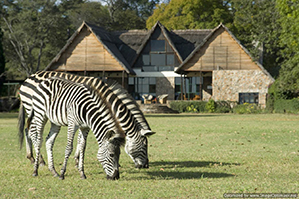 ZIMBABWE continues to be endorsed as a safe tourism destination despite the West’s efforts to dismiss the country as the most unsafe destination in the world.
The country suffered huge negative publicity in 2000 after it embarked on the highly successful Land Reform Programme that saw over 400 000 black households acquiring land.
Before the programme was implemented, about 4 000 white farmers occupied the country’s prime land
The negative publicity by the Western media resulted in a massive decline in tourist arrivals and huge losses in the tourism industry which was one of the key drivers of the economy.
While it seems to have taken almost forever to rebuild the country’s battered image, efforts are beginning to bear fruit.
The hosting of events such as the United Nations World Tourism Organisation (UNWTO) General Assembly last year has put back the country into the limelight.
The 2013 Tourism Trends and Statistics Report, released by the Zimbabwe Tourism Authority (ZTA) in line with the current global tourist arrival trends, shows that tourist arrivals in Zimbabwe rose from 1,7 million to 1,8 million.
ZTA chief executive, Karikoga Kaseke said tourism receipts for 2013 closed with US$856 million up from US$749 million in 2012, translating to a 14 percent increase attributed to an increase in expenditure patterns mostly by overseas visitors.
“Zimbabwe will not surrender its traditional markets such as America, England and Germany and will strive to regain lost market share,” said Kaseke.
“In the top 10 overseas markets for Zimbabwe is the US, which continues to lead as the major overseas source market for Zimbabwe, followed by the UK and Ireland.
“The UK and Ireland have maintained the second and third positions respectively for the past seven years followed by Japan, Germany, China, Australia and France.”
Apart from this major boost, a group of Kenyan tour operators recently endorsed Zimbabwe as a safe and prime tourism destination and committed to market Zimbabwe’s tourist attractions alongside those of Kenya to the international market.
The 15 tour operators, who embarked on a week’s tour of Zambia’s Livingstone, Zimbabwe’s Victoria Falls and Hwange Safari areas, said marketing Zimbabwe, will be very easy because the country is endowed with some of the best natural tourism products compared to other countries.
Joshua Sinkeet, head of the Kenyan delegation, said Africa as a continent was endowed with vast natural resources and it was time travel barriers within the continent were removed by introducing a uni-visa system that will make tourists, especially long haul tourists, travel freely within the continent.
Kaseke said Zimbabwe and Kenya will in the next few months sign a memorandum of agreement to kick-start the Victoria Falls and Mombasa Cooperative and Joint Marketing programme.
Zimbabwe will participate at the Kenya Travel Expo later this year to continue solidifying the relationship between the two countries and promote tourism business.
Meanwhile, ZTA has intensified efforts to grow domestic tourism ahead of the forthcoming Easter holidays.
The ZTA expressed concern over low domestic tourism and said it would work closely with players in the industry to put in place affordable packages for families to go out during the Easter holidays.
According to statistics by the ZTA, domestic tourism accounts for 87 percent of all tourism activities while international tourism has 13 percent.
However, of the 87 percent domestic tourism, over 70 percent is business tourism, leaving domestic leisure with less than 15 percent.
The ZTA head of corporate affairs, Sugar Chagonda said families will this year have the opportunity to enjoy their holidays as hoteliers and safari operators have come up with affordable rates.
“Although domestic tourism is still low against a background of low disposable income, we are going to come up with packages that suit the people’s pockets,” Chagonda said.
The move by ZTA compliments government’s new thrust to aggressively promote domestic tourism and tap into its vast potential as the country continues to work towards reviving the once thriving sector.