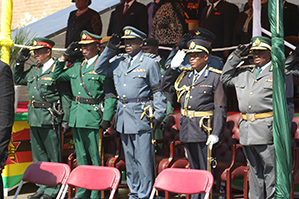 BY far, the worst security sector reform ever imposed on us Zimbabweans was the Selous Scouts Regiment.
It was designed to look like those forces genuinely fighting for African human rights yet in reality they were defending exclusive white settler privilege.
They dressed like ZANLA and ZIPRA comrades, they spoke the same language and chanted the same war slogans, but after gaining the trust of the oppressed masses, they directed the oppressors to massacre those trusting masses.
The Selous Scouts Regiment: A prototype of future security sector reform in Africa
The Selous Scouts Regiment turned out to be a prototype of future security sector reforms in Africa.
All the MDCs and regime change non-governmental organisations (NGOs) have turned out to be permutations of the satanic creation.
The following is Colonel Reid-Daly’s confession to the first group of black Selous Scouts trained to scuttle the liberation of Zimbabwe.
The excerpt is taken from his book Pamwechete (1999:pp65-66)
“Before I take you all into my confidence and tell you the main purpose of the Selous Scouts, I had to be absolutely certain of each man.
“I had to be sure of each man.
“I had to be sure that you were real men, and I can now confidently say that you are.”
I paused and watched a light of pride pass over their faces.
I then continued.
“Most of you chaps have been on operations and you know as well as I do the greatest problem we face is not in killing the insurgents.
“It is finding them, so that we can bring them to contact and kill them.
“We have all, I believe, experienced the frustrating difficulties in getting information from the local tribesmen who have been subverted by the insurgents.
“Now you are Africans. Imagine the problems that all-European units, like the Rhodesian Light Infantry, are experiencing.
“We have now discovered a new method of getting information from the subverted tribes people, and you are the men who are going to get the information.
“You will not become as you had believed, the army trackers.
“Instead, we are going to turn you into insurgents.
“You are going to be far better freedom fighters than the real ones ever were.
“You will have to be good because your lives will depend on just how good you are.
“You will pretend to be ZANLA or ZIPRA insurgents and infiltrate the population.
“You will infiltrate the circles of the insurgent sympathisers and form your own networks, and you will try to edge your way into the actual insurgent groups themselves.
“Now, perhaps you will understand why I was looking for real men.”
The excerpt is one which all ‘accomplished’ African academics and researchers who have been selected to man the Western-sponsored Zimbabwe Peace and Security Programme must of necessity take seriously.
Is it really possible that those who enslaved Africans and are still discriminating and lynching Africans in the West; those who colonised Africa and perpetrated genocide to preserve exclusive white privilege; those who sustained apartheid South Africa and Rhodesia (through arms trade and BP Shell); those who sponsored MNR and UNITA bandits; those who imposed illegal sanctions on Zimbabwe; those who are denying Africa a seat in the United Nations Security Council; those whose security sectors reduced Afghanistan, Iraq and Libya to rubble.
Is it really possible for such evil nations to sponsor peace and security for black people in Zimbabwe?
Are these ‘accomplished’ African academics and researchers not simply being asked to pretend to be African freedom fighters and believe that their lives depend on it?
The Zimbabwean case is not a simple case.
Zimbabwe’s historic survival of the unprecedented racist onslaught by the racist world in defence of exclusive racist privilege suggests that those on the offensive have obviously missed the critical point that the real Zimbabwean Security Sector cannot be reformed to serve alien interests because its elements are the ancestral fallen heroes who already paid the ultimate price in defence of the country’s sovereignty.
Their position is the ultimate expression of the idiom: “Chinokanganwa idemo rakatema, kwete sanzu rakatemwa.”
And, it is a position that turns Nehanda’s vow, “Mapfupa angu achamuka,” into a statement not just of sound, but a promise of invincibility.
And, ultimately, the question which all ‘accomplished’ African academics and researchers who have been selected to man the Western-sponsored Zimbabwe Peace and Security Programme must face is whether it is possible to subvert those who have already paid the ultimate price in defence of African sovereignty to turn against the cause for which they died defending?
Clearly, the Zimbabwean case has proven to be not as simple as at first seemed apparent.
It is a case of those who paid the ultimate price coming back to collaborate with the living to resolve the cause for which they died. those who cannot be killed again.
It is a case of those who know better resisting those who can no longer deceive them.