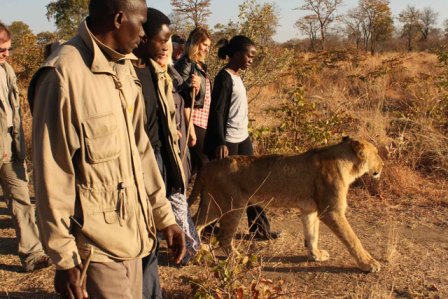 WE have attempted to throw light on aspects of the totem (mitupo) system among the Shona.
Most totems are animals and the taboo or mhiko is that one does not eat the meat of one’s totem/mutupo animal.
Most Shona groups observe this strictly.
If one knowingly eats the mutupo animal, they may fall sick, have their teeth fall out or otherwise suffer some calamity.
If, however, one commits the abomination unknowingly, there are no consequences.
The Shona are generally very proud of their totems.
They have elaborate praise poems that they recite based on the totem.
Often a hunter returning with meat or one who brings a gift will receive praises based on the totem.
Because the totem is a central institution among the Shona, at first meeting people will inquire as to the totem of the visitor.
Once it is known, they will use it to fully greet the visitor.
First names or surnames are normally not used, the totem rules the roost.
They will scan their own relatives’ totems e.g. in-laws totems and seek to define some relationship with the visitor.
For example, if the person’s mother is a ‘Moyo’ and the visitor is also ‘Moyo’ by totem, then he is identified as a maternal uncle (if a man) or aunt, if a woman.
If the visitor or stranger shares the same totem with the host, he is treated as a real brother or sister as the case may be.
The Shona take this practice seriously.
In this way, totems are used to define relationships and to draw people closer together, not to divide them.
Almost everyone you meet is a relative, whether close or distant.
The totem institution is a central element in conflict resolution and peace-making among the Shona people.
It is understood that people who are related must ‘look after each other’ as it were.
The totems or mitupo can be divided into two major clusters: those associated with the land/forest and those associated with the water.
The first group relates to totems of land animals.
Examples include, but are not limited to lion (shumba), zebra (mbizi), pig (nguruve), buffalo (nyati), elephant (nzou) and many others.
The second group of totems are related to water.
Examples are ‘dziva’, a pool of water, ‘hove’, the fish, the fish eagle, ‘hungwe’ and ‘ngwena’, the crocodile and others.
Among the Shona, it is generally agreed that the totem does not necessarily identify the ancestral roots of a person.
The reason is that many families or their founders have changed their totems for various reasons.
Earlier we referred to the ‘cheka ukama’ practice where it is alleged that a ‘Mhofu’ totem man, after committing ‘makunakuna’, the crime of sleeping with his own sister, changed his totem to ‘Soko’ and went through the ritual where a white beast (mombe chena) would be paid to ‘clean’ the abomination.
Many other Shona men, after committing a crime, ran away to a distant land and changed their totem so that they could not be tracked and punished.
These fugitives with a new identity, would still remind their family about their real totem and pass the information to their offspring.
I have met several people who will give their totem, but proceed to indicate that it is not their real (original) totem.
They keep it confidential for security reasons.
In some cases when a man failed to pay the requisite ‘roora/lobola’, which payment also acted as an affirmation that the children were his, the children would be forced to assume the totem of their mother.
Only upon payment of required penalties would the children be allowed to use their father’s totem.
Some families in the above situation, have resorted to a double-barrelled name that gives both the mother’s and father’s totem.
A good example is ‘Shava-Nyakudirwa’.
The mother is of the Shava (mhofu) totem while the father is Moyo (nyakudirwa).
Many families have remained with these double-barrelled totems because the erring forefathers failed to clear their ‘roora/lobola’ debts to the in-laws.
In these cases, the identities are not obscured though.
Let us return to the Shona and their roots.
We have seen that the Shona of Zimbabwe are the direct descendants of Mambiri, the head of the two (mbiri) villages in Tanganyika.
Oral tradition indicates that Mambiri’s son Murenga begat the ancestors of present day Shona people, which is why all our struggles are inspired by Murenga.
The question that might be asked is: when the Shona migrated south, what were their totems?
From talking to many people including the spirit mediums (mhondoros), the children of Mambiri (also called vaMbire) had three groups or totems; the Shava (Mhofu), the Soko (Mukanya) and the Moyo (Dhewa).
Indications are that the totems were created partly to allow inter-marriages, since it was strictly taboo to marry one of the same totem.
More importantly, however, is that these three groups or ‘houses’ were all descended from the same grandparent.
The divisions were meant to assign responsibilities for important tasks that were needed to sustain the community.
We shall examine the roles played by each of the three groups, the Shava, the Soko and the Moyo in the next article.