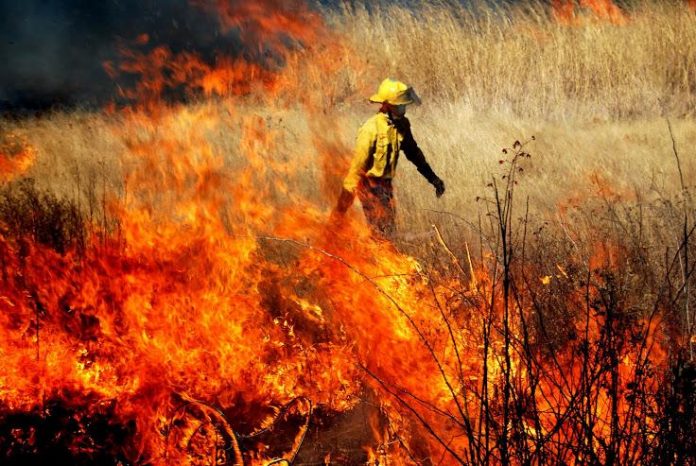 FIRE has devastating effects, especially on the environment, animals and people.
Veld fires have claimed several lives and destroyed thousands of hectares of forests around the country.
We are now in the fire season, according to the Environmental Management Agency (EMA).
The fire season starts at the end of May and ends in October.
Since time immemorial, there were holistic ways of managing fires.
Traditionally, communities took it upon themselves to protect their grazing lands and fields through the digging of trenches and clearing any dry material that could result in fires becoming uncontrollable.
Every fire season, villagers formed large groups of the able-bodied and armed themselves with hoes, shovels, small axes and dogs to clear areas bordering all their grazing lands and their fields to keep away the fires that could destroy their sources of livelihood.
These community efforts were initiated by chiefs, headmen and other community leaders.
According to the elders, certain places were deliberately burnt so that in the case of a fire outbreak, the fire would not spread to larger areas.
Each year, community elders and chiefs would choose certain grazing areas and places to be burnt so that fires were easily controlled.
The deliberate burning of certain areas and grazing lands was also a way of pasture management against ticks and other parasites that could affect livestock and people.
Elders said before any grazing area was burnt, villagers would gather at the chief’s homestead where traditional beer was brewed, a bull slaughtered and rituals performed.
This was done to ask the ancestors to ‘calm’ the fire so that it would not get out of control.
In most cases, after certain pastures were burnt, the heavens would open up letting down light showers to put out the fire. Before the burning exercise, young men were sent to scare off animals and sometimes create fire guards around watering holes and trees where birds would nest so that these were not destroyed by the raging fires. When they had finished combing the area, they would join others, signaling all was clear.
The traditional leadership also discouraged the use of fire in the harvesting of honey, mice, springhares, warthogs and other animals.
In the case of honey combing, communities were encouraged to drug the bees with smoke from cow dung, at night, instead of starting up small fires that might spread and destroy the veld.
In the case of animals hunters were encouraged to use traps instead of smoking out the animals out of their holes.
According to EMA, this is one of the major cause of veld fires in communal areas today. The chief or community leader would strike the first match to signal the start of the fire season.
Community elders also had the task of educating villagers not to throw away pieces of mirrors, bottles and other shiny objects that were reflective and could easily trigger fires if exposed to extreme sunlight.
At any rural homestead, there is a place dedicated for disposal of ashes and burnt coals commonly called durunhuru.
There were also times when certain sacred places like graveyards and mountains, would ‘burn’ on their own.
These fires, in most cases, were a good omen as they signaled a good season and elders also believed the ancestors were cleaning up their dwelling places. The fires were less damaging and would just extinguish on their own.
After the fires were started, the landscape would sprout new vegetation, trees, tubers and other medicinal plants that helped communities and animals.
Although EMA has launched the anti-veld fire campaigns that have paid dividends in most provinces, elders say they have been excluded in these programmes which focus more on modern ways of controlling fires instead of encompassing the traditional and conventional ways of controlling fires.
They said some of these fires are more traditional in nature and are trying to show the ancestors’ displeasure in some communities they occur.
During the veld fire campaigns EMA, trains and encourages the revival of fire management strategies like formation of firefighting teams that involve all stakeholders, while most communities have received firefighting tools like fire beaters.
Environmentalists have described the past five years as the worst with regards to fire damages. Raging veld fires destroyed more than 1,1 million hectares of forest cover. The fires also resulted in the loss of property, human lives, livestock and wild animals.
Although all the incidents of fire outbreaks were attributed to negligence on the part of the communities and to the fact that there were more agents like dry grass that promote fire outbreaks, the Environmental Lawyers’ Association called for the adoption of a more comprehensive fire management policy that involves traditional leaders and ministries that are co-ordinating environmental legislation.
However, the association said priority should be given to the dissemination of information through education, participation and compliance to laws that govern the use of natural resources. The optimum use of natural resources by the communities, particularly in the rural areas, constantly puts people in direct conflict with the environment as the type of life demands the exploitation of the natural resources.
Therefore they deliberately start fires in land clearing activities – fires that later rage out of control, inflicting damage on the fragile ecosystems.
It is therefore important to address environmental problems facing this country as a united people (both traditional and convectional) these problems have always been widespread, depending on land use and settlement patterns, including economic activities.
What most communities lack is clear informed and decisive action to minimise the damage to the environment.
Stakeholders opine that the damage inflicted on the environment can be reversed if all concerned organisations and Government intensify awareness campaigns.
Latest statistics from EMA indicate that the war to stop veld fires is not yet over, hence the need to assess the impact of various land use patterns on the environment with a view to encouraging the sustainable utilisation of natural resources while minimising environmental damage.