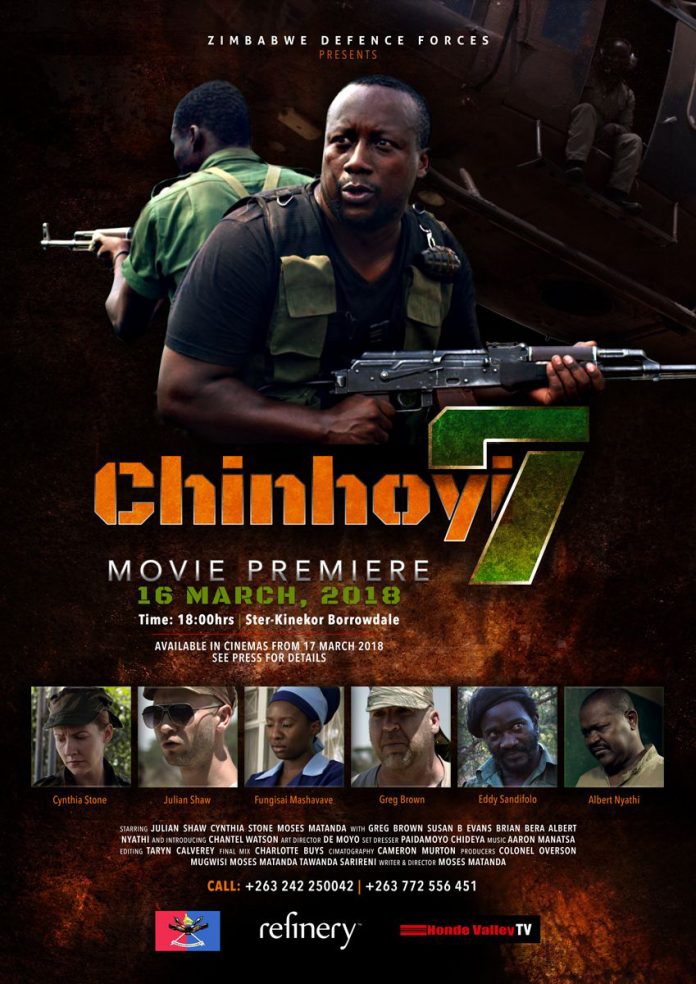 THE much-anticipated film Chinhoyi 7 finally premiered on Friday last week and is currently showing in local cinemas.
Written and directed by Moses Matanda, Chinhoyi 7 is a film based on true events of the liberation struggle of Zimbabwe.
It presents a significant chronicle of events that led to the start of the Second Chimurenga in 1966.
Not only written for the purposes of entertainment, the movie is a reminder to many Zimbabweans who were directly and indirectly affected by the liberation struggle.
In other words, Chinhoyi 7 tells the story of some important aspects of the history of Zimbabwe and explores the harsh relations between the Ian Smith regime and the black majority.
The film does well in highlighting the courage and heroism of the famous seven freedom fighters who were brave enough to ignite the liberation struggle in 1966.
It can be taken as a tribute to the seven fighters who perished while fighting for the independence of Zimbabwe.
The seven comrades are David Guzuzu, Arthur Maramba, Christopher Chatambudza, Simon Chingozha Nyandoro, Godfrey Manyerenyere, Godwin Dube and Chubby Savanhu.
There is no doubt Chinhoyi 7 tackles pertinent issues of racism, oppression, discrimination and displacement inflicted upon the black majority by the Smith regime.
It’s on record that the land issue sparked both the First and Second Chimurenga and Chinhoyi 7 concurs that land is an important asset to Zimbabweans.
“We will be fighting for our land, we tried to negotiate but no one listened. We must get it by force,” says one freedom fighter in the movie.
The film highlights the predicament of the black majority when they are forced off their homes to infertile settlements referred to as ‘reserves’.
“This is my land! And pack your things and go join the rest of your family in the mountains,” says Smith in the movie.
Through the film, Matanda does well in pointing out reasons that forced the black majority to take up arms and fight the oppressive Rhodesian Government when he says: “It is not a war against white people; it is a war against oppression, imperialism and colonialism.”
Some of the atrocities committed by the Smith regime include rape, flogging and unnecessary killings of the black majority.
In the film, the Smith regime is portrayed as brutal.
They imprison blackmen for being close to white women and for being found in possession of more than a Rhodesian pound in currency, among other trivia.
Critical about the film is, it documents and brings to light serious atrocities that were perpetrated by the whiteman.
Black women are raped while their husbands watch; children have their parents killed in front of them and servants are ill-treated because they are black.
In Chinhoyi 7, blacks are not only presented as victims as Matanda also exposes sellouts who betrayed fellow brothers and sisters in the liberation war.
Although the film dramatises the liberation struggle, Chinhoyi 7 shows how the black majority ended up resorting to the armed struggle.
The climax of the movie does not only result in the shooting of Smith, but shows the bravery of the seven freedom fighters as they almost bring down the town of Chinhoyi (Sinoia).
Although the end of the movie is ‘controversial in a way’ Matanda does well in bringing hope to the black majority and continuation of the liberation struggle.
However, despite Chinhoyi 7 being a film that tells the story of Zimbabwe’s liberation struggle, there are a number of issues directors of the film took for granted.
For instance, using a vehicle with the country’s latest number plates distorts the whole aspect of time setting of the movie.
Fundamental aspects such as costumes and make-up are important to consider in a movie and they make events appear as real.
With a film that is set in 1966, one would expect characters to put on costumes synonymous with the period.
It is bizarre for a character of a woman in the rural areas in 1966 to appear with an avant-garde make-up showing her neatly shaped eyebrows and manicured nails.
The directors should have also removed things like satellite dishes, double ply blankets commonly known as two-in-one, latest Isuzu vehicle, modern refrigerator and telecommunication boosters, among other things.
Matanda and crew, however, must be commended for producing a film that tells the Zimbabwean story from a Zimbabwean perspective.
The famous Chinhoyi seven gallant fighters died for a cause – to liberate Zimbabwe — and their story must be told again and again.
Chinhoyi 7 is a joint venture between the Zimbabwe Defence Forces (ZDF), Zimbabwe Republic Police (ZRP), Zimbabwe Prison and Correctional Services (ZPCS) and Honde Valley Television.
It is a must-watch film for any self-respecting Zimbabwean.